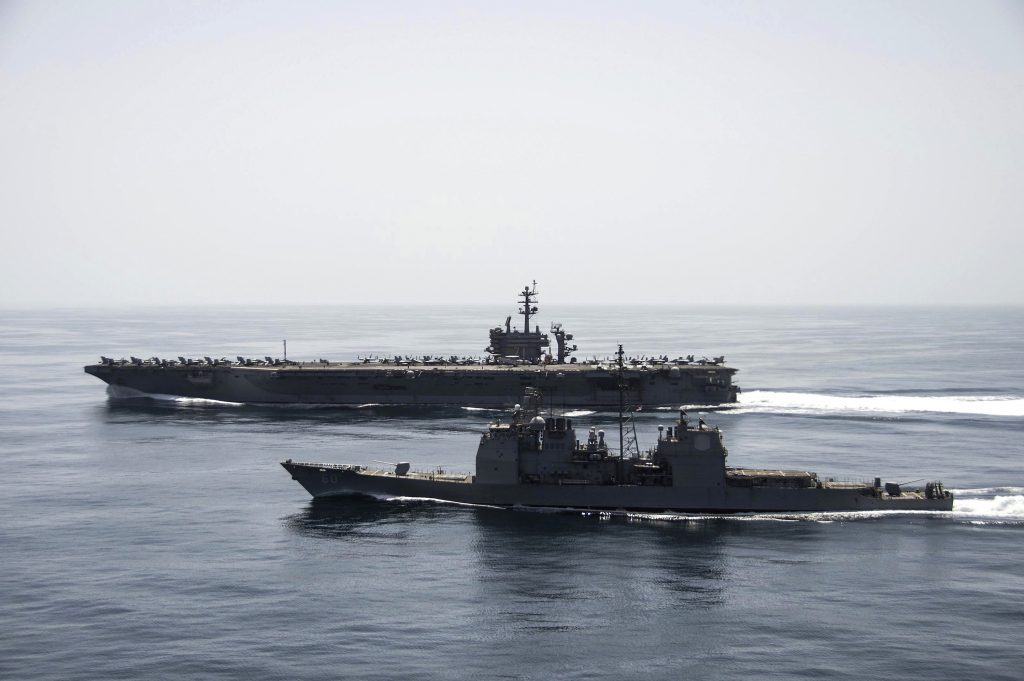 American efforts to build a maritime coalition in the Gulf to counter Iranian regime efforts to impede the free flow of shipping through the Strait of Hormuz have proven difficult and time consuming, but recent Iranian malign behavior is helping the US make its case.

The tense environment created by Iran since May in one of the world’s most important maritime chokepoints is cause for great concern, and the recent assault on Saudi oil production facilities—the most significant attack on global oil infrastructure in decades—represents a significant escalation. If the attack is proven to be of Iranian invention, the miscalculation on their part is astonishing—a proportional military response by Saudi Arabia and its allies would devastate an already fragile Iranian economy.

The difficulty the US has been experiencing in establishing a coalition effort to counter Iranian aggression has been somewhat surprising, given that a robust regional Combined Maritime Force (CMF), consisting of more than thirty nations, has been led by the US for nearly two decades.

There are several issues that have complicated US efforts to leverage the capabilities resident in the CMF into a force specifically designed to counter Iranian regime aggression. The CMF is a unique organization and participation by member nations is voluntary and guided by individual national caveats. Each member nation decides which missions it will participate in and to what degree. While less predictable than a more formal alliance, such as NATO, CMF has provided leadership and maritime assets throughout its existence that have made significant contribution to maritime security throughout the US Central Command area of responsibility. Discussions regarding missions directed specifically to counter Iranian activity have always been difficult within the CMF organizational structure, with many nations being clear that their willingness to combat issues such as piracy does not necessarily indicate a willingness to join the United States in counter-Iranian regime activity.

An additional challenge the United States has faced in forming a counter-Iranian regime focused coalition stems from the lack of coherency in the “maximum pressure” campaign. The Trump Administration has been clear that the goal of the campaign is to drive Iranian oil exports down to a level that will cause the Iranian people to demand their government change its behavior, with the desired outcome being the negotiation of a new agreement. How potential coalition partners would fit into any new negotiation remains unclear, and as long as there is a lack of clarity, suspicions regarding actual US motives will remain. Iran will also need to understand the role it is expected to play and what benefits it might derive from re-engaging.

Still, one does not need to look further than the CMF’s past efforts to counter Iranian activity in the Gulf. On April 28, 2015, Islamic Revolutionary Guard Corps Navy (IRGC-N) craft seized the Danish-owned Maersk Tigris while the ship was transiting the Strait of Hormuz, claiming to have done so in order to settle a long-standing maritime claim. Only days later, IRGC-N craft attempted to seize the Singapore-flagged Alpine Eternity as it transited from Bahrain to Dubai for repairs. The ship had recently allided with an Iranian oil platform and the stated purpose of the seizure was to ensure proper reparations were made for the mishap.

Within days of the Maersk Tigres incident, the US and UK began joint escort missions through the Strait. The fact that such a complex undertaking could be so quickly and easily put into action was the result of years of coalition experience and to the common goal the two nations shared to preserve a proper environment for moving forward on the ongoing Joint Comprehensive Plan of Action negotiations.

The joint US/UK escort mission was a short lived event and CMF operations since have continued to run smoothly, despite several periods of increased tension between Iran and the US and other individual CMF member nations. The civil war in Yemen provides an example of CMF member nations forming a separate coalition for a specific purpose that does not directly involve the CMF command structure or every CMF member nation, but involves operations in shared battle space.

Since Saudi intervention in Yemen began, they have led a maritime coalition aimed at preventing the illicit import of weapons into Yemen. Nearly every member of the Saudi-led coalition is a CMF member and all of their operations have taken place within the CTF-150 area of responsibility—all waters in the US Central Command area of responsibility except the Gulf—but without the assistance or involvement of CTF 150 or the CMF command structure. The coalition has been successful in its ability to operate continuously and cohesively because it shares the common goal of restoring the legitimate government of Yemen, as called for in UN Security Council Resolution 2216.

Recent efforts to build a counter-Iran coalition have been challenging because potential coalition partners have yet to come to agreement on what common goals the coalition might have. While the US states the purpose of the coalition as a security and stability building organization, similar to the short-lived 2015 US/UK escort operation, potential partners have been slow to come onboard because the administration hasn’t adequately clarified actual coalition goals. Highlighting potential partner concerns, German Foreign Minister Heiko Maas, said, “We consider the ‘maximum pressure’ strategy to be wrong. We do not want a further military escalation; we will continue to focus on diplomacy.” The US would do well given current circumstances to carefully articulate the goals of the maximum pressure policy and the diplomatic way ahead in terms of achieving those goals.

Stability in the Gulf is a global concern and the CMF has access to a large pool of experienced partners available to join in a coalition. Australia, the UK and Bahrain, and now Saudi Arabia have agreed to join in the effort, and they each add important capability. The maritime headquarters for the UK in the region is located in Bahrain and is already closely aligned with the US for routine maritime security activities. Australia also has significant experience operating with the US and CMF. Both Australia and the UK possess modern, capable, sophisticated ships and aircraft and significant command and control experience and capability. Bahrain provides significant host nation support for any potential partner through the access it provides to modern air and seaport infrastructure, available to support logistics, maintenance and basing. Bahrain also possesses a capable Navy and Coast Guard that is experienced in operating with the US and can provide support for asset intensive escort/maritime security operations. The Saudi’s add capability that mirrors and enhances Bahrain’s contribution and also provides the regional leadership and clout to bring other partners on board.

Support from other Gulf Cooperation Council partners, including Qatar, would provide additional medium sized warships, patrol craft and logistic hubs and present Iran with a unified—in common purpose, if not actually reconciled—front on the other side of the Gulf. South Korea and Japan are both highly dependent upon Gulf petrol exports and capable of providing capable ships and maritime aircraft that would directly enhance coalition capability.

A counter-Iran coalition designed to increase stability and security in the Gulf by suppressing Iranian opportunity to disrupt the flow of maritime traffic will, if properly constructed and conducted reduce the risk of direct conflict, despite continued Iranian aggression. The United States is correct in its attempt to build such a coalition, but must work harder to assure potential coalition partners that they are joining an organization with military goals that support individual national policies.