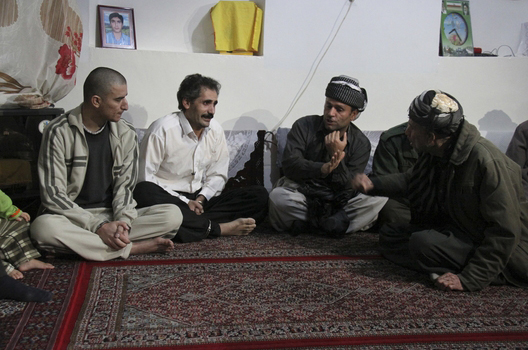 Iran has reportedly been engaged in secret talks with multiple Iranian Kurdish militant groups in Norway. These meetings—which started in May, June, and with a third scheduled last month—are the first time the Iranian government has met with multiple Kurdish groups since the 1979 revolution.

Iran’s engagement with these armed Kurdish actors—two wings of the Komala party of Iranian Kurdistan and two rival factions of the Kurdistan Democratic Party (KDP)—currently highlights its attempt to hedge against US President Donald Trump’s “maximum pressure” campaign, which de facto includes imposing sanctions and fomenting unrest domestically, in an attempt to change what it perceives as Iranian malign behavior.

Tehran likely aims to dissuade the Kurdish Iranian insurgents from increasing their onslaught in Iran or halting it through peace agreements. Sensing the immense geopolitical challenges Iran is facing, these Kurdish groups—which seek autonomy through armed struggle—might be testing the waters amid mounting regional pressure on Tehran.

Despite plans to meet, the Islamic Revolutionary Guard Corps (IRGC) launched war games in the province of Western Azerbaijan aimed at countering “terrorist” groups, according to Tasnim News Agency. This either signifies Iran’s keenness on forcing Kurdish groups to compromise by initiating offenses or countering attacks launched by the latter or groups not interested in engagement. In all cases, Tehran is unwilling to show that it would be negotiating on the premises of geopolitical weakness.

Iran suspects that Kurdish insurgent groups are receiving support from Saudi Arabia and the United States. Thus, Tehran wants to ensure that it does not become outflanked and distracted in a three-theater war in the Persian Gulf, its Kurdish territories, and in Sistan and Baluchistan province in the south east of the country.

Yet, the aims of Iran’s strategy to de-escalate with Iranian Kurdish insurgents likely goes beyond tackling direct security threats, and includes upholding economic goals at home and in neighboring Iraq amid harsh economic US sanctions that Tehran is facing.

In provinces inhabited by ethnic Kurds—Kurdistan, Kermanshah, Western Azerbaijan, and Ilam—the Iranian government has recently started pursuing softer policies towards the historically marginalized Iranian Kurdish population. This, for example, was reflected by the recent return of an exiled Kurdish singer to his hometown Sanandaj after 35 years. Similarly, this was followed by holding a first annual Kurdish fashion festival.

If sustainable easing of security restriction in Kurdish areas in Iran is undertaken, this would help the government deprive Iranian Kurdish insurgents operating abroad from the needed public support base in Iran.

The likely prospects of further economic impoverishment of Iran’s Kurdish population, fueled by US sanctions, incentivizes Tehran to remove some restrictions in order not to push the inhabitants of the Kurdish areas to sympathize with the insurgents and revolt when circumstances are suitable.

In the wave of protests that Iran saw in December 2017 and January 2018, ethnic Kurds in urban centers were one of the groups that participated. This was in part because unemployment has been historically above the national average in provinces inhabited by ethnic Kurds in Iran, except for Ilam which remained below the national average at least since President Hassan Rouhani took office in 2013 (see figure below).

Tehran’s ability to ease security and economic pressures in its Kurdish inhabited provinces on one hand, and de-escalating with Iranian Kurdish insurgents taking refuge in the Kurdish Regional Government (KRG) in Iraq on the other hand, are helpful in its efforts to increase Iran’s economic exchanges with the KRG. Both efforts lead to the halting or minimization of conflict in the KRG, which often result in civilian casualties. This may also help the Iranian government send positive signals to the Kurdish population in Iraq for appeasement, a way to increase Iraqi Kurdish receptiveness towards Iranian exports to the autonomous region. Integrating with the KRG economically is one of the means of realizing Iran’s envisaged land bridge to the Middle East.

During 2017, President Rouhani suggested that a railway project which planned to connect Hamedan with the Kurdish inhabited city of Sanandaj could be extended to Iraq—probably through the KRG—and then to Syria. In August 2018, during a visit by Vice President and Head of Plan and Budget Organization Mohammad Baqir Nobakht, the provincial governor of Kurdistan had expressed hope that the railway connection project would be completed by the beginning of 2021.

Parallelly, Tehran has been attempting to grow its airport connections in the north west of the country with those of the KRG. In April, an Iranian official stated that flights from the province of Western Azerbaijan to the KRG’s Erbil would start in the near future. In July, the provincial governor expressed interest in resuming flights between Sanandaj and the KRG’s Sulaymaniyah. Because of the KRG’s independence referendum held in 2017, Iran had halted flights based on a request from the central government in Baghdad.

In line with the Iranian government’s broad strategy of encouraging tourism in Iran to hedge against US sanctions, Tehran has been targeting Iraq’s Kurds to visit Iran’s provinces—including its north western provinces—for tourism. For the Iranian government, a tourism boost in Kurdish inhabited areas can alleviate the economic hardship of these areas by decreasing chronic high unemployment. But also, for Tehran, increasing tourism furthers the country’s soft power, an element Iran is striving to project in its neighborhood.

While the Iranian government has been long pursuing policies and strategies encouraging exports to the KRG, Tehran is currently doubling down on these to encourage trade with the autonomous region. One-third of Iran’s non-oil exportsto Iraq are destined for the KRG annually. However, Iranian trade with the Kurdish Regional Government might be standing on shaky ground as US sanctions continue to pressure Iran’s economy and the Trump administration lobbies the KRG against expanded trade with Iran. This is highlighted in Sulaymaniyah by a member of the governorate’s Chamber of Commerce who stated in July that Iranian products which once acquired 60 percent of the city’s market two years ago, have now dropped down to 40 percent. Still, Iran has attempted to counter these sanctions by holding exhibitions, easing visas, eases bureaucracy, among other strategies.

Facing Washington’s “maximum pressure” campaign, Tehran is willing, at least on tactical grounds, to pre-empt and break regional isolation—partially driven by the US—especially in economically critical Iraq and KRG. While Tehran is aware of the importance of cementing its soft power with the Kurdish Regional Government by pursuing a transnational approach that does not compartmentalize Kurds in Iran and Iraq, the legacy of decades-long security strategies to counter perceived threats might overshadow such attempts.

Tamer Badawi is an analyst specializing in Iranian foreign policy with a focus on the Arab neighborhood. He is a visiting fellow with the School of Transnational Governance at the European University Institute. Follow him on Twitter: @Tamerbadawi1.

Image: Members of the Komala party talk to relatives of their victims in a home in the northwestern city of Marivan, near the Iranian border with Iraq. (Reuters)