Whatever Iran ultimately decides about returning to compliance with the 2015 Joint Comprehensive Plan of Action (JCPOA), the International Atomic Energy Agency’s (IAEA) years-long investigation into whether Iran failed to declare all of its nuclear materials and activities must continue unimpeded.

While the growing proliferation risk posed by Iran’s advancing nuclear program highlights the urgency of reinstating the JCPOA’s strict limits and intrusive monitoring, there is little, if any, space for the United States and other parties to the agreement to negotiate over the agency’s safeguards probe.

The safeguards investigation is focused on accounting for Iran’s nuclear materials and activities and ensuring they remain in peaceful purposes. Evidence provided by the IAEA suggests Tehran failed to meet its international legal obligations to fully declare its nuclear inventory. This probe is separate from the JCPOA, even if Iran insists on tying the two processes together.

It appears that European Union High Representative Josep Borrell attempted to thread the needle of addressing Iran’s demands for a specified end to the probe without committing the JCPOA’s other parties to supporting a premature conclusion to the IAEA investigation.

According to an August 11 report in The Wall Street Journal, Borrell’s final draft reflects Iran’s desire for the IAEA’s investigation to be closed before it reimplements the JCPOA. Iran’s August 15 response to Borrell’s proposal suggests that Tehran will accept language stating that the United States and its partners will only urge an end to the safeguards probe after the IAEA is satisfied with Tehran’s cooperation. This is important, because the United States and its partners cannot, and should not, give any assurances on concluding the investigation. Any perception that the agency is being pressured to close the probe or politicize the inquiry would jeopardize the IAEA’s critical safeguards mandate and have negative implications for the nonproliferation regime.

Unlike the JCPOA, which is a political agreement, Tehran is bound by international law as a non-nuclear weapons state party to the Nuclear Nonproliferation Treaty (NPT) to implement a safeguards agreement with the IAEA. Safeguards are a critical nonproliferation tool included in the treaty to assure that a state is not diverting nuclear materials from a peaceful program. According to Article III of the NPT, safeguards must be applied to “all source or special fissionable material in all peaceful nuclear activities” within a state. As part of that safeguards process, a state must submit a detailed declaration to the IAEA about the quantities of nuclear materials and the locations where activities involving nuclear materials take place. The IAEA then uses a range of tools to verify that the state’s declaration is complete and correct.

Since 2018, the IAEA has been investigating evidence that Iran failed to declare nuclear materials and activities as required by its safeguard’s agreement. As part of that investigation, IAEA inspectors found traces of processed uranium at three sites that were never included in Iran’s nuclear declaration. While evidence suggests that the uranium was processed prior to 2003, Iran must still account for the current whereabouts of the material and the activities. As the United Kingdom, France, and Germany noted in a June 8 statement to the IAEA’s board, “the issue is not ‘historical’ but rather concerns securing the necessary verification assurances that Iran’s declarations are correct and complete today and in the future—and the integrity of the safeguards regime, that is to say a key pillar of our common security, today and in the future.”

Even after reaching an agreement with the agency on a process to close the investigation in March, Iran did not engage in a good faith effort to address the IAEA’s questions. Tehran attempted to blame third-party actions and sabotage for the traces of uranium found at the three locations, but provided no evidence to the IAEA to back up those claims. It was hardly surprising that Grossi determined that Tehran’s responses were not technically credible and that the IAEA could not close the investigation ahead of the June meeting of the IAEA’s Board of Governors as the March agreement aimed to do.

Grossi noted in the May 30 report to that board that, until Iran provides this cooperation, the “Agency cannot confirm the correctness and completeness of Iran’s declarations under its Comprehensive Safeguards Agreement.” For this reason, the board overwhelmingly passed a resolution in June urging Iran to “fulfill its legal obligations” and “clarify and resolve all outstanding safeguards issues.”

In stonewalling the IAEA’s inquiries, Iran has raised several arguments as to why it views the agency’s investigation as illegitimate and politically motivated—none of which hold water.

In seeking to delegitimize the IAEA’s investigation, Tehran has argued that the IAEA closed its nuclear file on Iran in 2015 when the agency issued its final assessment of the past military dimensions (PMD) of Iran’s nuclear program and issues from that period cannot be reopened. After dragging out the PMD investigation for years, Iran was required to satisfy the IAEA’s inquiries prior to the JCPOA’s implementation. While Iran did not admit to an illicit weapons program, Tehran cooperated enough for then IAEA Director General Yukiya Amano to issue a final report on weaponization-related work at the end of 2015. That report assessed that Iran’s organized nuclear weapons development effort concluded in 2003 and that, while some activities relevant to building a nuclear explosive device continued through 2009, there was no evidence of current weaponization-related work. The IAEA Board of Governors then passed a resolution to “be no longer seized of the matter.”

While the resolution closed the PMD issue, the current investigation is about accounting for Iran’s nuclear materials. The 2015 board resolution does not preclude the IAEA from investigating evidence of undeclared uranium, including from the pre-2003 period. It also does not excuse Iran from failing to declare nuclear materials from that period. In fact, the 2015 resolution underscores the importance of Iran continuing to implement its safeguards agreement, stating: “Iran shall cooperate fully and in a timely manner with the IAEA in implementing its Comprehensive Safeguards Agreement and Additional Protocol, including by providing access.”

Iran has also argued that this investigation is politically motivated and based on fabricated evidence. Again, these arguments do not hold up. Israel publicly demanded that the IAEA investigate Iran and provided the agency with documents pertaining to Tehran’s abandoned nuclear weapons program that Israel stole from Iran in 2018. However, the agency has repeatedly reiterated that it has a stringent process for evaluating safeguards-relevant information provided by third parties. Additionally, it would be irresponsible of the IAEA not to follow up on credible evidence that a state failed to meet safeguards obligations.

The IAEA has demonstrated that it is not engaged in a witch hunt and has an endpoint to its questioning. In the most recent safeguards report issued by Grossi on May 30, the IAEA stated it had no further questions about the location of a uranium metal disc that underwent drilling at Lavisan-Shian, one of the four locations under investigation, even though the IAEA could not locate the disc and concluded that the activities that took place at the site “were not declared by Iran to the Agency as required under the Safeguards Agreement.” Uranium metal is relevant to building a nuclear explosive device, but the IAEA’s investigative focus was on accounting for the nuclear material. This further suggests that the IAEA is likely to be reasonable in requesting clarification and information about the other three locations under investigation.

The Joe Biden administration has also made clear that it supports closing the investigation if Tehran provides meaningful cooperation with the IAEA. “We seek credible explanations, consistent with Iran’s safeguards obligations, that can finally put these issues behind us,” US Ambassador to the IAEA Laura Holgate told the agency’s board in June. Similarly, the June resolution on Iran adopted by the IAEA board alluded to closing the investigation, saying it was essential for Iran to provide the IAEA with the “technically credible” evidence and documents “for the Secretariat to be in position to report the issues as no longer outstanding and thereby remove the need for the board’s consideration and action on these issues.”

The IAEA investigation into Iran’s undeclared nuclear materials and activities is not going away. There are broader nonproliferation norms and obligations at stake. As a member of the NPT, Tehran must meet its safeguards obligations and account for its inventory of nuclear materials. It would be a mistake to jeopardize what may be the last remaining opportunity to salvage the JCPOA by making demands that the United States and other JCPOA parties cannot meet. It is possible for the safeguards investigation to be closed before restoring the JCPOA, but Iran is the only country that can make that happen. 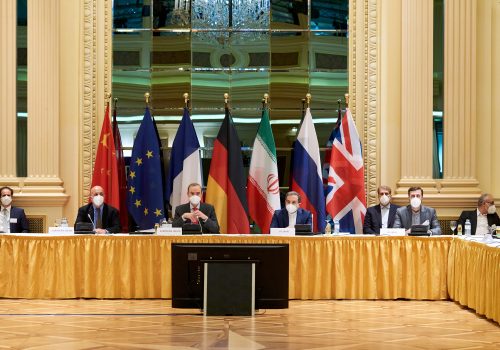