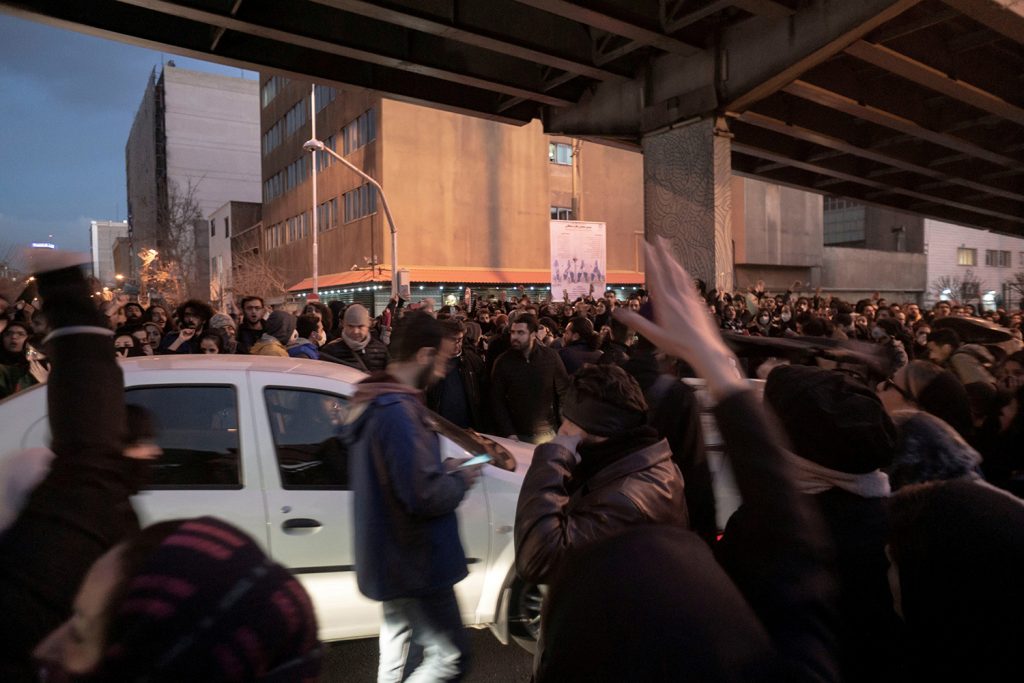 Over the past few weeks, media reports have attempted to reconcile the crowds at the funeral procession for Quds Force Commander Qasem Soleimani with subsequent protests in which crowds of protesters chanted anti-regime slogans.

Some analysis has painted the Iranian populace as confused or oscillating wildly between pro-regime and anti-regime sentiment. Smarter analysis has noted that Iran is a state where freedom of assembly is not free, and that the crowds that turned out for Soleimani are not necessarily pro-regime, but rather anti-US aggression. And finally, others have correctly pointed out that, much like populations elsewhere, the Iranian people are not a monolith. One accurate window into which way the country will trend, however, is to track the demands of Iranian civil society.

While the Iranian state has done its best to dismantle civil society and shut down the free press, activists have endured. Following the disputed 2009 presidential election, many women’s rights activists, student activists, labor activists, journalists, lawyers, and others were arrested, imprisoned, or exiled. In the decade since, they have sacrificed a lot. They have faced lengthy prison sentences, brutal treatment behind bars, hunger strikes, and alienation from friends and family. But out of this pain, a new consciousness among Iranian civil society leaders has emerged. They have learned a lot about themselves and what sacrifices they are willing to make for their beliefs. And they have been steeling their minds for this very moment.

They are leading with their chants in the streets and letters from prison. And their message to the people of Iran is clear: don’t abandon your self-respect and human dignity. Enough is enough.

Add to this, the sorrow of those who have suffered unspeakable losses in the protests of 2009, December 2017–January 2018, November 2019, and now. Catalyzed by grief, the parents of protesters killed by the Iranian state have rallied to seek justice and accountability for their loved ones. The father of Pouya Bakhtiari—a twenty-seven-year old vegetarian engineer who was shot in the head by security forces in a protest in Karaj on November 16, 2019—now faces national security charges for demanding justice for his son. A group of sixteen mothers whose children were killed in the violent state crackdown on protesters in November have organized and called for the establishment of a United Nations fact-finding committee on rights violations. And finally, in a demonstration of cyclical violence by the Iranian state, Shahnaz Akmali—whose son who was killed in protests during 2009—was just arrested on January 15 and taken to Evin prison to serve a one-year prison sentence merely for seeking justice for her son during the past decade. These citizens-turned-activists appeal to mothers, fathers, wives, husbands, and anyone else who can see themselves in their loss.

This has seeded the climate for the Iranian population’s loss of faith in empty promises for reform from the country’s ruling class. And now the discontent has trickled down to even those who have traditionally eschewed radical politics. The popular Iranian actress Mahnaz Afshar has expressed her remorse for voting for reformist candidates in previous elections and urging others to come out to the polls. Actress Taraneh Alidoosti announced on her Instagram that the Iranian population “are not citizens” but “captives,” and has reportedly been summoned by authorities for her open defiance of the Iranian regime. And athletes, many of whom have historically stayed apolitical, have been emboldened. Iran’s only Olympic medal-winning female Kimia Alizadeh, announced in January her defection from Iran in a statement that accused the government of oppressing her rights as a woman.

These are the signs of a population turning. Indeed we only need to listen to the chants of the protesters and their actions to understand how their message is one that rejects the Islamic Republic’s propaganda and says: we want a different path for our future.

For the global community, the task should simply be to support the protesters in their rightful demands. Unfortunately, for many, these protesters remain as tools in other designs. When US President Donald J. Trump boasted at a campaign rally about how Iranian protesters took pains to not desecrate the US flag and said the Iranians now “love our country” because of his leadership, it was not borne out of care for the hopes and aspirations of protesting Iranians. Indeed, Trump’s silence on Saudi women activists currently tortured in jails in the Kingdom or his lack of attention to deaths of political prisoners in Egyptian jails demonstrates little care for people or their demands beyond tools that can help him secure re-election in 2020.

Then for those in the West who view Iran as a key bulwark against US imperialism, the dignity of the livelihoods of the people inside Iran are merely an afterthought. They share an expectation that the Iranian people should suffer in silence under a brutal state, for the goal of acting as a thorn in the side of the “US empire.”

While coming from opposite ideological poles, both views regard protesters as mere tools in a greater geopolitical game, without regard to their individual hopes, desires, or progressive vision for their country.

A related fiction is the idea that protesters are somehow picking an “inconvenient” time to voice their dissent, because it risks allowing external powers through societal cracks to wreck havoc in the country. The worker’s movement, the student’s movement, and the women’s rights movement have historically been the strongest civil society movements in Iran—and they are anti-imperialist, leftist movements at their core. To somehow insinuate that Iranian protesters could be falling into the “trap” of the Trump administration denies these protesters their agency and doesn’t track with reality.

Rather, what the international community should be doing is empowering Iran’s civil society and protesters with solidarity statements and constructive actions.

Here are six concrete ways that policy makers and the global public can help:

Gissou Nia is a human rights lawyer and nonresident fellow with Middle East Programs at the Atlantic Council, where she is leading a strategic litigation program on the Middle East and North Africa, with an initial focus on Iran. Follow her on Twitter: @GissouNia.

Image: Protesters demonstrate in Tehran, Iran January 11, 2020 in this picture obtained from social media by Reuters via REUTERS