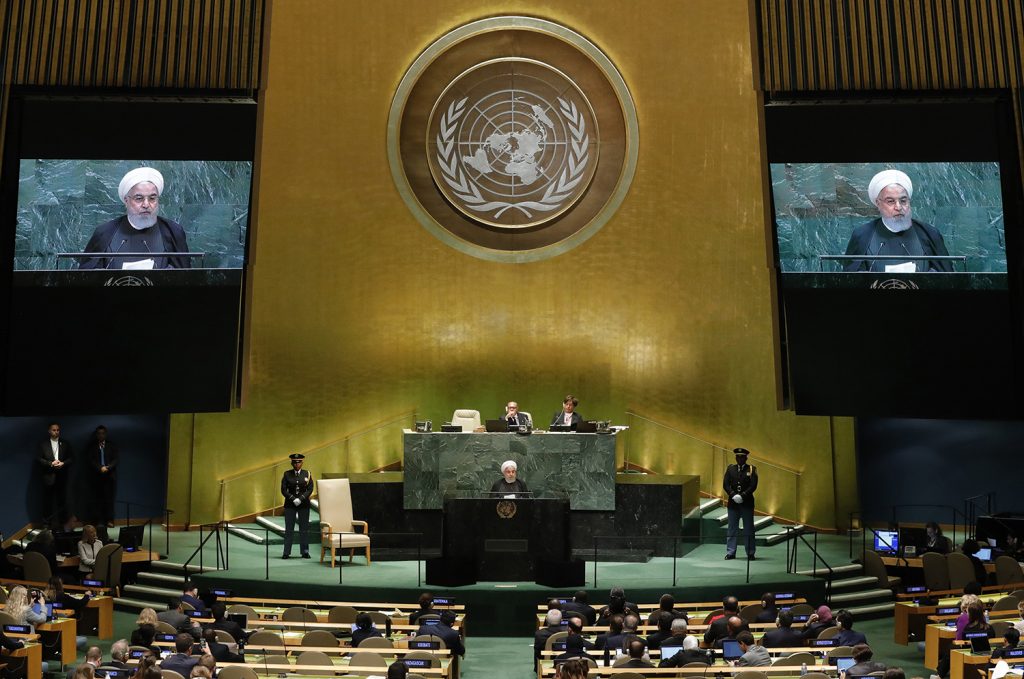 United Nations General Assembly summits can be an opportunity for ice-breaking encounters between long and bitter adversaries. For the US and Iran this year, however, it was another missed opportunity.

Chances that Presidents Donald Trump and Hassan Rouhani would meet this year were always slim given Iranian insistence that the US first ease sanctions re-imposed after the US unilaterally withdrew from the Joint Comprehensive Plan of Action (JCPOA).  But those chances evaporated as the Trump administration imposed yet more sanctions—against Chinese shipping companies transporting Iranian oil in contravention of a US-imposed embargo and against Iranian government officials and their families. Meanwhile, Trump faced new domestic challenges in the form of an impeachment inquiry.

Trump, in his speech to the UN on September 24, harshly criticized Iran but also held out an olive branch when he noted that “many of America’s closest friends today were once our greatest foes. The United States has never believed in permanent enemies. We want partners, not adversaries. America knows well that anyone can make war, only the most courageous can choose peace.”

French President Emmanuel Macron made strenuous efforts to arrange a Rouhani-Trump encounter at the UN. But Rouhani, instead of meeting Trump, followed the example of his foreign minister earlier this year and for the first time granted an interview to Trump’s favorite television channel, Fox TV, to explain his case.

The US, Rouhani asserted, was the interloper and aggressor in the Middle East, not Iran. Asked whether he was prepared to “bump into” Trump on the sidelines of the UN gathering, the Iranian president said, “Why would we bump into one another? If we seek to pursue higher goals to benefit both countries, both people, it must be planned… But prior to that, we must create mutual trust. And the trust is something Mr. Trump took away” by quitting the JCPOA.

Rouhani reiterated this point during his formal UN address on September 25, saying that a “memorial photo is the last station of negotiation not the first one.”

Iran, he suggested, would be willing to negotiate additional understandings with the US and the international community and even change the name of the JCPOA—presumably so Trump could put his brand on it, if the US would come back into compliance with the original deal. But Rouhani did not specify what more Iran would do and it appeared that he was referring to a proposal by Iranian Foreign Minister Mohammad Javad Zarif earlier this year for Iran to ratify the Additional Protocol of the nuclear Non-Proliferation Treaty—allowing for intrusive inspections of Iranian nuclear facilities—in return for the US Congress voting to permanently lift sanctions. That appears unlikely.

“I would like to make it crystal clear,” Rouhani said. “If you are satisfied with minimums, we will also be working with the minimums; either for you or for us. However, if you require more, you should also give more.”

The language seemed tailored to appeal to the wheeler-dealer in chief.

Instead of bridging gaps, however, both countries used the platform of the UN to try to build broader coalitions against each other—each with limited success.

Rouhani announced something he called the “Coalition for Hope” or “Hormuz Peace Endeavor” to restore stability to the Persian Gulf, where Iran is believed responsible for a series of attacks on shipping and oil installations following the US announcement in May that it would try to bring Iran’s oil exports to zero. Notably, the initiative appeared to call for the exit of some 70,000 US forces in the region and is thus an obvious non-starter for US allies such as Saudi Arabia and the United Arab Emirates.

“The security of the region shall be provided when American troops pull out,” Rouhani said, not “with American weapons and intervention… Security cannot be purchased or supplied by foreign governments,” he added, in an obvious dig at Saudi Arabia for failing to defend its main oil refinery despite having spent billions of dollars on US military hardware.

While Rouhani was talking up his “hope” proposal, the Trump administration was trying to marshal a broader coalition against Iran.

Shortly before Rouhani spoke, Secretary of State Mike Pompeo addressed United Against Nuclear Iran (UANI), an organization that opposed the JCPOA and has supported ever more sanctions against Iran.

Pompeo boasted that Britain, France and Germany—the key European negotiators of the JCPOA along with the European Union, China and Russia—had issued a joint statement blaming Iran for the September 14 attacks on Saudi oil facilities. This statement was the “beginning of awakening that Iran is the aggressor, not the aggrieved,” Pompeo said. Announcing new sanctions on Chinese companies that transported Iranian oil, he urged more countries to pressure Iran and at the same time “help us get Iran back to the negotiating table.”

But while Pompeo spoke, the Europeans were meeting with Iran to discuss how to shore up the JCPOA. The US forfeited its seat at this Joint Commission when it quit the deal in 2018.

The Trump administration insists that its “maximum pressure” campaign is intended to bring new negotiations. But the US message has been blurred by US officials’ flirtation with groups that support regime change. Pompeo, for example, spoke at UANI’s annual summit even though a day earlier, the organization reportedly hosted members of the Mujaheddin-e Khalq (MEK) and other Iranian opposition groups that advocate the overthrow of the Iranian government. (UANI later denied planning the event, though their name was on the program as an organizer.)

Pompeo’s State Department earlier this year changed its talking points to no longer exclude the MEK as a viable alternative to the Iranian government. Most Iranians detest the group for its alliance with Saddam Hussein during the Iran-Iraq War.

With Trump now embroiled in defending his presidency against an impeachment inquiry following his admission that he asked the president of Ukraine for help in investigating the son of Democratic rival Joe Biden, Iran is unlikely to soften its stance, sensing Trump’s increasing desperation for a foreign policy achievement.

One avenue to de-escalate tensions could be talks on exchanging Americans jailed in Iran for Iranians jailed in the US or in third countries at the behest of the US. Iran signaled its willingness to hold such talks earlier this year when it freed an American green card holder of Lebanese origin, Nizar Zakka.

The US, in turn, could lift stringent restrictions on the movement of Iranian diplomats assigned to the United Nations. The restrictions are so tight that Iranians who live just outside New York City must move their families to the pricey east side of Manhattan within a year and Foreign Minister Zarif—who has been personally sanctioned by the Trump administration—was told he could not visit Iran’s UN ambassador, who has been hospitalized.

With the two sides at an impasse, the prospect is for more US sanctions, more incidents in and around the Persian Gulf and even a direct confrontation that Trump has sought to avoid—at least until Trump’s fate is determined by the US Congress or the American electorate.