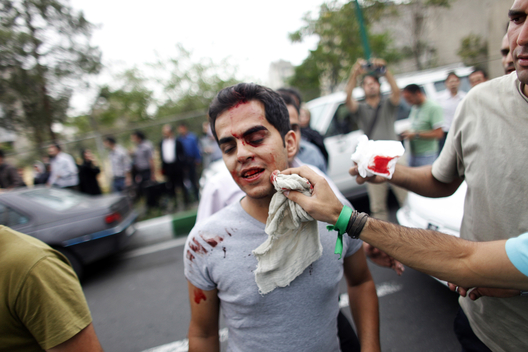 Up until recently, Iran’s Islamic Revolutionary Guards Corps (IRGC) was an organization relatively unknown to the American public. However, with the Trump administration’s “maximum pressure” campaign on Iran threatening to boil over into actual military confrontation, and the IRGC’s announcements of downing an American drone and seizing oil tankers, the increasing references to this group in the mainstream news and on social media may soon make it a household name.

But what is the IRGC? While currently there is an intense focus on the Guards’ military actions on behalf of Iranian state interests in the Persian Gulf and its extraterritorial reach in Syria, Iraq, and elsewhere in the region, the IRGC is an entity that goes far beyond a military force.

The Iranian Constitution defines the IRGC’s primary role as protector of the 1979 Revolution and its achievements. This ambiguous and broadly interpreted mandate has empowered the Guards to expand into a formidable social and cultural force and has manifested into various types of repression of the Iranian people. This includes the IRGC’s tight control of political prisoner wards where those jailed are routinely subjected to coercive interrogations, tortured and sometimes even killed, and the creation of an all-volunteer paramilitary force, the Basij, that is responsible for policing the “vice and virtue” of the Iranian populace.

The abuses perpetrated by the IRGC against the Iranian people are too numerous to be exhaustively listed here. But they include the widescale crackdown by the Guards and Basij forces on peaceful protesters following the disputed June 2009 Iranian presidential election, in which hundreds were killed and scores more injured, jailed, tortured or disappeared. They count the abuses perpetrated against political prisoners in IRGC-controlled prison wards all across the country, including Evin Prison and the Orumiyeh Central Prison, as well as unofficial detention centers. They also encompass the brutalization of ethnic and religious minorities kept in IRGC-controlled detention centers in Arab populated towns in Khuzestan Province, in Kurdish majority towns in Kurdistan and Kermanshah Provinces and elsewhere throughout the country.

This is where legal options come in. The Trump administration’s official designation of the IRGC as a foreign terrorist organization (FTO) in April was criticized by some regional observers as an unnecessary escalation that was all bark and no bite. However, what the designation did do is open the door to criminal prosecutions of companies or persons in the European Union, Latin America, Africa, Asia or elsewhere that do business with the Guards, who control a considerable part of Iran’s economy.

US law already punishes US persons who deal with the IRGC and the Quds force, but the FTO label now makes it a crime for anyone, anywhere, who is subject to the jurisdiction of the US, to knowingly provide material support to the IRGC. This pathway for criminal actions further enlists US law enforcement to investigate these files, and supplement the ongoing activities of the US Treasury and State Department, which have historically focused on the sanctions side of these efforts.

While these fresh prospects for criminal prosecutions opened by the designation target the IRGC’s role in global terror, they do not necessarily address the ways in which the Guards have brutalized the Iranian people. However, there are existing legal avenues to take against the IRGC’s leadership and connect it to victims’ justice that pre-date the FTO designation, and which have been underutilized by some affected communities.

These approaches include suits filed under the Foreign Sovereign Immunities Act (FSIA) which provides jurisdiction over certain types of civil claims against foreign states and their agencies. The FSIA’s “terrorism exception” allows plaintiffs to hold a state defendant accountable for acts of terrorism, torture, hostage taking and other enumerated acts. The exception applies to any designated state sponsor of terror, a list that currently includes North Korea, Sudan, Syria and Iran—though the act in question must have injured a US national, member of the US armed forces or a US government employee.

While this exception has been used to great effect by survivors and the families of victims of Lebanese militant group Hezbollah and the Palestinian militia group Hamas in attacks in Israel, Lebanon, Syria and elsewhere—albeit with challenges in collecting money judgments—it has been relatively underused by other aggrieved people, including those abused within Iran’s borders and their immediate family.

Part of this relief could include suing the Iranian state for the abuses of the IRGC against Iranians inside the country. For example, US citizens of Iranian origin who have been tortured in IRGC-run wards of Iran’s jails have pursued these legal actions—such as Washington Post columnist Jason Rezaian who filed suit in federal court for damages for the torture and mistreatment he suffered while unjustly imprisoned in Iran. But beyond US nationals who were imprisoned in Iran is a broader network of people who can seek redress, including members of a victim’s immediate family who suffered from intentional infliction of emotional distress as a result of what befell their loved one. This is especially important for historically marginalized communities like the Kurdish ethnic minority, the Baha’i religious minority, the Arab ethnic minority and other minority groups where stories of abuses—such as arbitrary detention, custodial torture and executions—are rife.

Among these communities, recourse through US courts has been sparingly pursued. This could be due to a lack of resources or knowledge about these legal procedures, or even due to a fear of retaliation against family members back in Iran. And these FSIA claims do not even cover what could be possible through the Torture Victim Protection Act and the Alien Tort Statute, two other statutes under US law which allow non-US citizens to file claims in US courts and which, if personal jurisdiction hurdles are met, could support suits against named IRGC officials who perpetrated human rights abuses.

In overcoming these barriers and encouraging aggrieved communities to seek justice, we all have a role to play.

For the US government that involves looking at the potential criminal liability of human rights abusers and holding them accountable where there is jurisdiction and the laws allow, or enhancing existing laws or creating laws where there are gaps. For private law firms that involves supporting potential claimants—who are survivors or families of the victims of IRGC brutality—either on a pro bono or contingency fee basis. For human rights NGOs that means continuing to do the hard work of documenting abuses and drawing links in the chain of command that legal briefs will draw on to support their cases. And for the victims and survivors of these atrocities, it’s summoning the courage to come forward to tell their stories and to seek justice against a repressive regime with little regard for the law.

While we are in a dangerous game of chicken between the US and Iran it can be hard to see what long-term objectives should be prioritized for the sake of global peace and security as the Trump administration ramps up its pressure on the Iranian regime, and the latter retaliates in response.

But it bears reminding here that the IRGC is not just a military force, it is also a perpetrator of human rights abuses on its own people and this is a search for justice that US courts can aid in. The need for justice for survivors and the families of victims will remain regardless of who is in charge or which way the political winds blow.

Gissou Nia is a human rights lawyer and nonresident fellow with Middle East Programs at the Atlantic Council, where she is leading a strategic litigation program on the Middle East and North Africa, with an initial focus on Iran. Follow her on Twitter: @GissouNia.