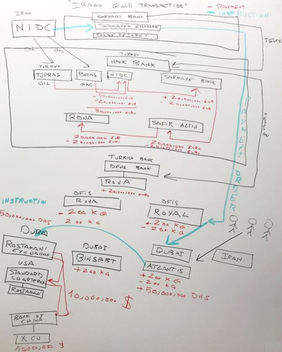 On November 5th, Ahmad Amirabadi, a member of the Iranian parliamentary board of directors, posted an exasperated tweet: “Almost all the individuals and entities that were active in bypassing the previous [US] sanctions [during the Obama administration] are included [in the new list of Specially Designated Nationals and Blocked Persons]. The question is, how this information has fallen in enemy’s hands. The security forces should investigate.”

According to the US Treasury Department, “over 700 [new] persons [and entities] have been designated or identified and added” to the Specially Designated Nationals (SDN) List.

A statement made in June by Iran’s Foreign Minister Mohammad Javad Zarif also confirms that the US government has been able to obtain information about the mechanisms and channels used by Iranians to get around the Obama-era sanctions. “America has discovered the breathing canal we utilized [when we were under sanctions]. Even if they didn’t have enough information at the time, they were able to gather the information they lacked after they arrested [Reza] Zarrab and [Ali Sadr] Hashemi Nejad,” Zarif remarked.

Reza Zarrab, an Iranian gold trader, orchestrated the largest sanctions-evasion scheme in modern history by utilizing Halkbank, the Turkish state bank. During his trial, Zarrab sketched an elaborate flow chart that detailed how Iran was able to bypass US sanctions. His scheme reportedly allowed $13 billion dollars to flow into Iran between March 2012 and July 2013.

Ali Sadr Hashemi Nejad, the owner of the Maltese Pilatus Bank who was arrested in March in a Virginia airport, was also involved in efforts to evade US sanctions on Iran. He allegedly conspired to funnel millions of dollars through the US financial system under a Venezuelan construction contract. According to a Manhattan-based US Attorney, “Nejad created a network of front companies and foreign bank accounts to mask Iranian business dealings in Venezuela and evade US sanctions.”

There are other examples that also shed light on how the American government and other investigators have gathered information on Iranian tactics to circumvent sanctions. Hamid Hosseini, the secretary general of the Iranian Oil, Gas, and Petrochemical Products Exporters’ Association (OPEX), identified several approaches used by the Americans to discover Iranian sanctions-evading strategies. One such strategy involved setting up fake companies or individuals interested in purchasing Iranian oil. These bogus oil buyers connected to US or Israel intelligence services (or in some cases real buyers who lost contracts to their competition), would claim to be willing to secretly buy Iranian oil and subsequently filter information to the American government on how the setup worked.

Since the inception of the Islamic Republic in 1979, Israeli and American spy networks have been active in Iran but they have not always been successful. According to a November 2 Yahoo News report, between 2009 and 2013 the Central Intelligence Agency suffered “catastrophic” intelligence failures related to a private Internet-based communications system with CIA officers and their spies/sources located around the world. Sources in Iran were involved in these communication and intelligence failures. A national security analyst with the Government Accountability Project, Irvin McCullough, said, “This is one of the most catastrophic failures since September 11.”

In an October 26 report, Haaretz revealed that Black Cube, described as an “almost privatized wing” of the Mossad, was also heavily involved in uncovering the economic assets of the Iranian government worldwide. In its operation, Black Cube targeted banks, companies and individuals who were cooperating with Iran. This operation could have potentially led to the discovery of links between the foreign entities and Iranians inside the country.

Despite the deep penetration of US and Israeli intelligence into Iran’s economy, the success of the new wave of sanctions that went into effect on November 5 is not assured. As the Atlantic Council has reported, Iran has a variety of means to circumvent sanctions and many of Iran’s trading partners are incentivized to help.

The US sanctions are intended to paralyze Iran’s oil industry, which is the centerpiece of the country’s economy. The sanctions also target shipping and banking systems in an effort to disable Iran’s trade with the outside world. The US has allowed eight countries to maintain limited oil imports as a temporary concession but is still insisting that they are working toward reducing Iranian oil exports to zero. The US states that worldwide, companies have to choose between doing business with Iran or with the US. Already fifty large corporations have left Iran.

SWIFT, the Belgium-based messaging network used by banks and financial institutions to send and receive information for money transfers, has announced that it would follow the US restrictions and has disconnected blacklisted Iranian banks from the global financial network.

European governments, however, have maintained their determination to confront the Trump administration’s policy on Iran due to two fundamental disagreements.

Firstly, the European Union feels humiliated and disrespected by President Donald Trump’s unilateral policies towards Iran. His decision to quit the Iran nuclear deal when Iran was—and is—still complying with it not only undermines Iran’s sovereignty, but also that of European countries that have the right to determine their own foreign policies. “Europe refuses to allow the US to be the trade policeman of the world,” French Finance Minister Bruno Le Maire told The Financial Times on November 6. The minister also stressed that tensions with the US over Iran and the Joint Comprehensive Plan of Action, commonly known as the Iran nuclear deal, revealed the need for the EU to “affirm our independence.”

Secondly, if Iran descends into chaos due to US sanctions, Europe believes that there is not a reliable way to fill the subsequent power vacuum. Iran would become another failed state, contributing to an area of political instability stretching from Afghanistan to Syria. The region would become a giant base for terrorism and organized crime and massive waves of refugees, including Sunni jihadis, would likely pour into Europe. “For us, [confronting the US move on Iran] is not about economic interest; this is about security interests for the EU… In the absence of the deal with Iran, we believe the security of the region and the EU will be at stake,” said the EU foreign policy chief Federica Mogherini.

Trying to neutralize US sanctions, European governments are about to set up a Special Purpose Vehicle (SPV) system. The SPV would allow for financial transactions to occur between Iran and foreign companies without using the US dollar through a kind of modified barter. Meanwhile, the EU has also updated a statute—called a blocking statue—that allows EU companies to recover damages from US sanctions. That said, the SPV is best suited for small or medium-sized companies rather than large multinational corporations which would not want to jeopardize their relationship with the US.

All evidence points to the fact that Europeans are extremely motivated to help Iran deal with US sanctions. At the same time, according to the International Monetary Fund, Iran was running a current account surplus in March and had over $100 billion in foreign currency reserves. Although economic turmoil is certain for Iran, the country should be able to survive with help from Europe, its biggest trading partner, China, as well as India, Turkey and Russia. Iran’s short-term plan is to keep its head above water until 2020, hoping that Trump will not be re-elected. If he is elected to a second term, the collapse of the nuclear deal and an escalation of US-Iran tensions is much more likely. Even a US-Iran war that could consume the whole Middle East, as many analysts argue, could also become a reality.