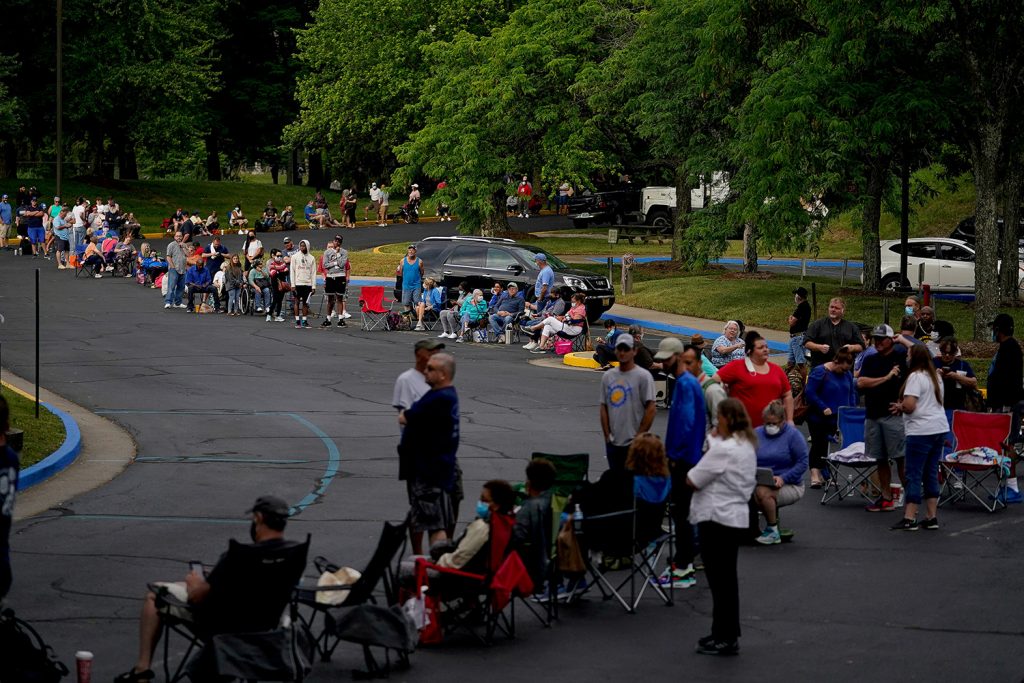 People line up outside Kentucky Career Center prior to its opening to find assistance with their unemployment claims in Frankfort, Kentucky, U.S. June 18, 2020. REUTERS/Bryan Woolston/File Photo/File Photo

The US economy added 266,000 jobs in April, well below experts’ forecasts of one million jobs. Unemployment rate rose to 6.1 percent, 0.3 percentage points higher than economists had estimated. Moreover, official estimates of job growth in March were revised down by 146,000 – from 916,000 jobs to just 770,000. According to the Bureau of Labor Statistics (BLS), the overall employment is about 8.2 million below its pre-pandemic levels in February 2020. Although hiring in the leisure and hospitality sector has picked up in the past few months, the employment is this sector is still 2.8 million below its pre-pandemic levels, by far the largest gap when compared to other sectors: manufacturing is down 515,000, retail 340,000, education and health 1.2 million, and state and local government 1.3 million.

April numbers suggest that there were about 1.1 people unemployed for every job opening in the economy, pointing to a shortage story in labor supply. Economists attribute this shortage in labor supply and subsequent slowdown in total nonfarm hiring to many factors: extended federal and state unemployment benefits, $1,400 stimulus checks sent to around 161 million individuals, lingering health risks, continuing childcare challenges, early retirement, millions of temporary layoffs with the expectation of returning to work soon, declining numbers of full-time job openings, and a relative shift towards digital and the gig economy. While economists differ on the impact of each of these factors in suppressing labor supply, there is little disagreement that the U.S. labor market is undergoing profound changes. For one, civilian labor force participation rate (LFPR) has been declining in the past two decades since it peaked at 67.3 percent in January 2000. As seen in Figure 1, the global financial crisis (GFC) and the pandemic have sped up this process.

The second and less-talked-about issue is the rise of the informal labor market, which is one factor that could explain the decline in LFPR. Data is sporadic and somewhat outdated, but pre-pandemic estimates suggest that at least one-fifth of non-retired American adults have participated in the informal labor market while also holding full-time or part-time jobs and 17 percent generated income exclusively from informal employment. The main drivers for this trend are declining job security and tenure in the US economy and stagnant real wages over the past decades, which again, are exacerbated by the GFC and the pandemic. While there are no recent statistics, the combination of factors highlighted above have clearly increased the opportunity cost of formal employment for unskilled workers, possibly encouraging them to offer their services in the informal labor market. As a result, one could safely speculate that the pandemic has pushed millions of less-skilled unemployed and employed workers towards informal economic activities, especially in the leisure and hospitality sector.

If not reversed, these developments in the US labor market will have serious ramifications for public finances, social security, and the overall health of the economy in the long run. Growing informality is tantamount to longer dependence on the social welfare programs and lower income taxes, deteriorating government’s fiscal position and weakening the entitlement programs. Policymakers at the local, state, and the federal level must avoid social safety net policies that increase the opportunity cost of formal employment –such as generous and prolonged unemployment benefit–and instead, focus on safety net policies that reduce the opportunity cost of formal employment, such as subsidizing childcare and expanding access to it. President Biden’s American Families Plan is a step in the right direction in this front, as it plans to spend $225 billion over the next decade to subsidize childcare and invest in increasing its quality. However, a holistic policy mix including but not limited to immigration, childcare, welfare programs, SME financing, and job training programs is needed to effectively reverse these harmful and persistent trends in the US labor market. Declining LFPR is not inevitable for an aging economy and growing informality is certainly not normal for an advanced economy.