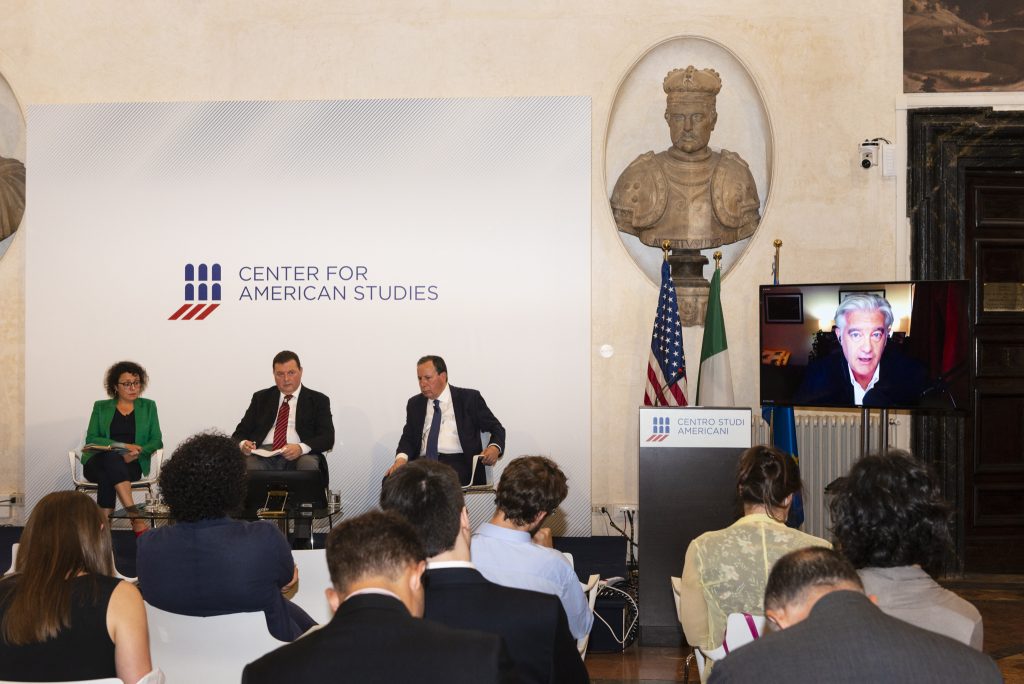 On June 7, the Atlantic Council’s (AC) North Africa Initiative hosted an event, “New Transatlantic Relations for the Middle East and North Africa,” in collaboration with US Embassy Rome and Centro Studi Americani. Moderated by Karim Mezran, director of the AC’s North Africa Initiative and resident senior fellow at the Atlantic Council, the event explored increased Russian and Chinese presence in North Africa, as well as opportunities to leverage the US-Italian partnership to address challenges from great power activity in the region.

The event included opening remarks by William Wechsler, senior director of the Atlantic Council’s Rafik Hariri Center & Middle East Programs; Thomas Smitham, chargé’ d’affaires of the US Embassy in Rome; and Ferdinando Salleo, former ambassador of Italy to the United States. It featured a broad panel of experts, with Valeria Talbot, co-head of the Middle East and North Africa Centre at the Institute for International Political Studies; Khemaies Jhinaoui, former minister of foreign affairs of Tunisia and founder of the Tunisian Council for International Relations; Jonathan Fulton, nonresident senior fellow at the Atlantic Council; and Dina Fakoussa-Bherens, associate fellow at the German Council on Foreign Relations.

Opening the discussion, Weschler emphasized the necessity of transatlantic cooperation in creating sustained policy change in North Africa, presenting a strong counterargument to the perception that the US has vacated the region. Salleo contextualized North Africa at-large, emphasizing the impact of the Ukrainian conflict on the economies of both Europe and North Africa. Smitham contended that these challenges can be addressed by greater US-Italian partnership in the region, which has grown stronger in the past year under the Italian presidency of the G20 and bilateral meetings between President Biden and Italian Prime Minister Mario Draghi.

Remarks from Keynote Speaker Yael Lempert
In her keynote speech, Yael Lempert, acting deputy assistant secretary for the Bureau of Near Eastern Affairs, addressed widespread misconceptions of US withdrawal from North Africa and the Middle East (MENA), affirming that the Biden administration has focused on affirmative engagement in the region. Through this initiative, the US is empowering North African nations to decide with whom and when they cooperate on issues. Lempert made clear that regional stability is in the best interest of nations across the globe, and that the US will continue to have a newly defined presence in North Africa that highlights the region’s human potential. She underscored this commitment through the US’s donation of 35 million COVID-19 vaccines, alongside ongoing collaboration on key issues such as climate change.

According to Lempert, the US has also been at the forefront of enacting a sustainable political vision in the MENA. The US continues to deliver transformative regional changes through the Abraham Accords, as shown by increased economic and diplomatic engagement between Israel and its once adversarial regional neighbors. In nearby Syria, the US has maintained its voice for peace by advocating for a ceasefire agreement, cross-border mechanisms, and accountability for the Assad regime. These efforts have proven to be effective in Libya, where the US and allies have upheld a 19-month ceasefire agreement that has facilitated political negotiations.

However, Lempert warned that the positive effects of such transatlantic efforts are under threat. Russia and China have both benefitted from the status-quo created by an increased US presence that enabled greater security. China has increased investment and trade, delivering opaque investments that leave countries in debt, and compromising sovereignty. Meanwhile, Russia’s invasion of Ukraine has precipitated a global food security crisis that will exacerbate existing food insecurity challenges in the MENA region. While Lempert made clear that the US remains optimistic about the region’s future, she is clear-eyed about the work that needs to be done to unlock its human potential.

Fulton provided a China-centric lens on the region. Addressing the myth of US departure, he argued that even Chinese policymakers do not share this view. Chinese party leaders recognize the US’s power and long-standing relationships in the region, which China has yet to build itself. Fulton described China’s primary interests in the Middle East and North Africa as related to economic and political engagement with its Belt and Road Initiative. This policy has drastically changed, however, with the weaponization of trade due to the US-China trade war. The Chinese government therefore views the MENA region as an opportunity to challenge US foreign policy. Ultimately, while the US’s focus on development continues to resonate, there are increasing attempts from Beijing to discredit the US.

Dina Faoukoussa-Behrens addressed how North African countries, especially Egypt, view the US and its partners vis-à-vis China and Russia. Both regional leaders and the public were disillusioned by the US response to the Arab Spring, prompting many North African nations to turn to China and Russia. Egypt’s President Abdel Fattah el-Sisi embodies the transition to allyship with Russia, which drawing on Sisi’s extensive military background, has led to the establishment of bilateral military partnerships between the two countries. Russia’s seemingly poor performance in its invasion of Ukraine, however, has dissuaded many in North Africa from relying on one nation. In fact, a multipolar order is in the best interest of North Africa, as it provides them a bargaining tool in future negotiations.

Focusing on how Italy can engage with European and US leaders to tackle issues in MENA, Talbot explained that there is little cohesion in Italy’s foreign policy, a void which has damaged its credibility in the region. Italy’s policy in the MENA has focused on mitigating illegal migration and terrorism, avoiding fragmentation and power vacuums, ensuring economic prosperity, and securing energy supplies. However, the war in Ukraine could create an opportunity for Italy to collaborate with regional partners like Turkey to address shared interests in Libya and elsewhere.

Main Policy Recommendations
According to the panelists, countering Russian and Chinese influence in the region must be achieved through transatlantic cooperation. With North Africa beginning to experience duress as a direct result of the Russian invasion of Ukraine, Fakoussa-Behrens articulated that now is the time for transatlantic allies to provide aid to the region, serving as a valuable substitute to Russia. Similarly, Fulton stressed that the US must maintain a level-handed economic approach to North African nations to appear as the preferable partner to China and Russia. Furthermore, Talbot stated that it is necessary for Italy and its allies to develop a more coherent policy in the North African region, working to advance their goals in cooperation with North African nations.

While Jhinaoui agreed with the necessity of transatlantic cooperation, he contended that transatlantic allies must tailor their policy in the region to meet the specific needs of each country, while also working to limit the socio-economic fallout of war in Ukraine. Similarly, it is necessary that the US and its allies pursue a two-state solution for Israel and Palestine alongside ending the conflict in Syria, as these issues impact engagement in North Africa. By addressing these ideas, a new partnership can be created in a way that is mutually beneficial for the transatlantic alliance and the MENA.

Alexandra Kaiss is a Young Global Professional with the Middle East Programs at the Atlantic Council.