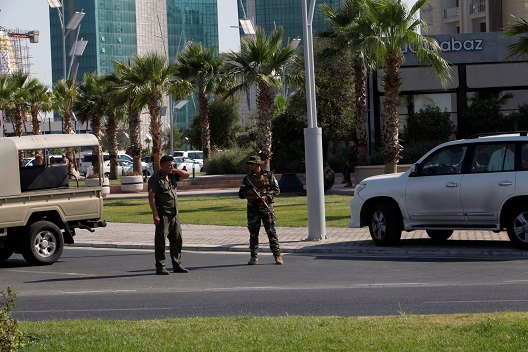 On Wednesday July 17, 2019 a shooting took place in a restaurant in Erbil, in the Kurdistan region of Iraq, that allegedly killed a Turkish diplomat serving in the consulate, Osman Kose, and two Iraqi civilians. Reports claim that three assailants with alleged Islamic State (ISIS) allegiances were behind the shooting and quickly killed as well although investigations are still pending. No group claimed the attack with the PKK spokesperson denying its involvement. The Kurdish Regional Government condemned the shooting vowing to investigate and offer any assistance to the Turkish Government. The Turkish foreign minister, Mevlut Cavusoglu, attended the funeral for the diplomat today.

Below are expert insights from the Middle East Programs on the recent event:

The shooting of a Turkish diplomat in Erbil may or may not be an act of terrorism. It is important to allow KRG authorities to investigate and expose the perpetrators and their reasons before anyone reacts to the incident. Iraqi Kurds, especially in Erbil, have done very well in establishing law and order in their region and this is a test they should be allowed to pass on their own.

Dr. Nabeel Khoury is a nonresident senior fellow at the Atlantic Council’s Rafik Hariri Center for the Middle East. A retired foreign service officer, Dr. Khoury has served as a spokesman for the Department of State in Iraq in 2003 and as Deputy Chief of Mission in Yemen, 2004-2007. Between 2008-2012, he was the director of the Near East South Asia office of the Bureau of Intelligence and Research (INR).

The assassination of the Turkish diplomat in Erbil occurred in a critical time as Turkey has announced recently that it is planning to re-open its consulate in Mosul, which was closed after ISIS took control of the city in June 2014.  It is also a reminder of the risk and personal sacrifices diplomats are making to serve in post-conflict areas, such as Iraq. That said, it should not cast a heavy shadow on Turkish-Iraqi relations or put Kurdistan’s security accomplishments in doubt.

This is not the first time that Turkey’s personnel or assets have been targeted in Iraq but it comes at a particularly volatile time in the Middle East where old alliances are fraying and new rules of engagement and intervention are being written up. Although there has not yet been a solid claim of responsibility it came on the same day the Kurdistan Workers Party (PKK) announces four of its leaders had been killed in Turkish airstrikes in April. If the PKK was behind the attack it would signal a potentially novel and dangerous expansion of tactics and targets, a willingness to take action beyond traditional bounds of its decades-long conflict with Ankara. It also adds yet another dimension of instability to an Iraq already struggling to recover from the war against the Islamic State.