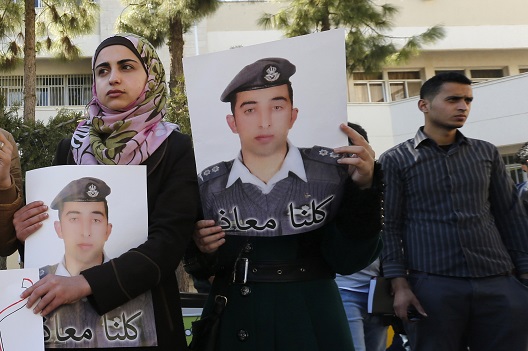 The news surrounding the execution of Jordanian pilot Muath al-Kasasbeh was accompanied by shocking images of his Islamic State (ISIS or ISIL) captors burning him alive. ISIS undoubtedly timed the release of this news to inflict the most damage on the Jordanian government and bring its original demand—that Jordan withdraw from the coalition—to the fore.

At 10:53 a.m. today, US Secretary of State John Kerry spoke at a press conference with Jordanian Foreign Minister Nasser Judeh, praising the “strategic” US-Jordanian partnership and announced a memorandum of understanding (MoU) to increase aid to the embattled country. The United States intends the aid, upped from $660 million annually to $1 billion, to offset the costs of hosting more than 800,000 Syrian refugees and support the country’s counterterrorism efforts. A few minutes into the press conference, Secretary Kerry said, “the people of Jordan need to know that all Americans will join with them in praying for the early and safe return of Lieutenant Moaz al-Kasasbeh. And we call upon his captors to release this brave man so that he could return to his family and his homeland, to at least provide proof of life, which Jordan has asked for.”

The reference to the captured Jordanian pilot could not have been more foreboding. Thirty minutes later, the Twittersphere erupted with images of the pilot in the trademark orange suit, in a cage, being burned alive. The immediate reaction would be to juxtapose the images of Foreign Minister Judeh and Secretary Kerry shaking hands and signing the MoU against the images of the Jordanian pilot minutes before his alleged execution. But the carefully planned execution could not have been conducted so quickly, let alone the montage of the Hollywood style video that depicts his death. With King Abdullah’s trip to the United States announced one day in advance, ISIS and its advanced network of tech-savvy members could have prepared the video in anticipation of such an opportune moment to capture the world’s attention.

Over the past several weeks since ISIS attempted to exchange the Jordanian-held Iraqi prisoner, Sajida al-Rishawi, for a captive Japanese journalist, the Jordanian public yet again focused on any news or hope of the release of al-Kasasbeh. News channels showed images of family members gathered in his home and interviews with his mother, pleading with her “brothers” in ISIS to treat her son with mercy and release him. Her cries served as a constant reminder of the heavy cost of the country’s involvement in the international coalition to defeat ISIS. As the news of the execution reached his family and hometown, Al Jazeera Arabic broadcast interviews with Jordanians outside of the family’s gathering place, holding the Jordanian government as the primary party responsible for al-Kasasbeh’s fate. A former parliamentarian said:

In Amman and the pilot’s hometown of Karak, demonstrations of anger erupted, resulting in the burning of local government offices.

King Abdullah did not cut short his planned meeting with senators as many would have expected, choosing to remain in Washington and meet with President Barack Obama for an unscheduled meeting this evening. The news of the pilot’s “martyrdom” announced on Jordanian state television accompanied a new revelation al-Kasasbeh had been executed a month earlier, on January 3. In between Hill meetings, the King appeared to address Jordanians on state television, although there were some indications that the statement was recorded before his departure to the United States, suggesting that he either knew of the execution or had anticipated the release of the news.

Jordanians on social media had already created the hashtag “We Are all Muath” in solidarity with their kidnapped pilot weeks ago, but other hashtags were more ominous: one declared, “this is not our war.” Jordanians, gripped with anger at the loss of one of their own to ISIS, blamed Jordan’s authorities for not doing more to free al-Kasasbeh, claiming his case received no attention until ISIS offered to exchange the Japanese prisoners. The revelation that ISIS executed al-Kasasbeh a month earlier will only inflame public fury at the Jordanian intelligence service’s attempt to delay public anger. Another hashtag that emerged soon after was “we are all the martyrdom project” in reference to Jordanian officials who, in an attempt to quell public anger at the capture of al-Kasasbeh, declared that “we are all martyrs for Jordan.” Both supporters and detractors of the Jordanian government used the hashtag, with the former calling out anyone critical of the regime and declaring that the country must band together in the face of such terrorism.

Jordan’s fragility—land locked between wars in Iraq, Syria, and the Occupied Territories, and grappling with a constant flow of refugees—has long been a concern for the United States as it sought to support what it considers a moderate, stable regime in a sea of instability. While most of these external challenges provide a reason for the King to seek financial assistance and support from the international community, they do not help subdue domestic criticism. In the aftermath of the Arab Spring, Jordan faced the strongest public protests in decades, some of them with unprecedented calls for the King to abdicate the throne in the wake of a declining economy. Although the government weathered that storm, the ISIS expansion just north of Jordan’s borders and its Salafi problems in the south will require King Abdullah to find new ways to quell the brewing discontent with the country’s involvement in the international fight against ISIS. Taking the arcane, nationalist approach—calling for public support of the army and the need for a united front—will not appease an already irate Jordanian street. Ordinary Jordanians need to see their government prioritize its citizens’ needs over a geopolitical chess game.

Tuqa Nusairat is the Associate Director for Programs at the Atlantic Council’s Rafik Hariri Center for the Middle East.

Image: Students hold pictures of Islamic State captive Jordanian pilot Muath al-Kasaesbeh during a rally calling for his release, at Jordan University in Amman February 3, 2015. The fate of Kasaesbeh has raised public pressure on Jordan's King Abdullah over his country's role in the U.S.-led military campaign against the hardline group in Syria, fuelling the risk of broader discontent in the U.S. ally. The posters read: "We are all Muath". REUTERS/Muhammad Hamed