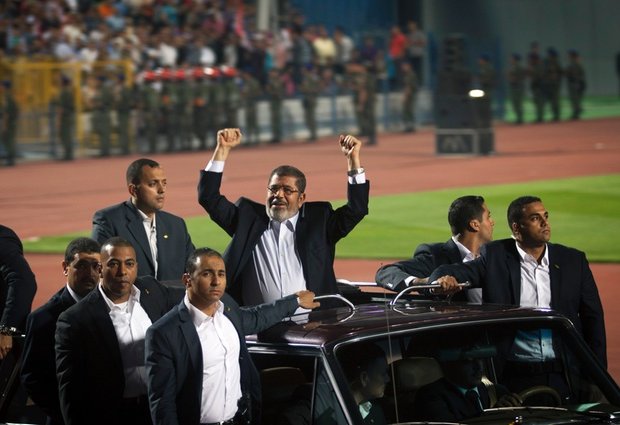 Marking his first 100 days in office, President Mohamed Morsi issued a decree pardoning protesters convicted and imprisoned during the January 25th uprising that led to the ouster of Hosni Mubarak. The decree was met with mixed reactions, with many describing it as a step in the right direction, but lacking certain guarantees.

The pardon extends to “all felony convictions and misdemeanor convictions or attempted-crimes committed to support the revolution and the fulfillment of its goals during the period from January 25 till 30 June 2012, except in cases of murder.” The pardon applies to those sentenced, facing charges or trial, as well as those awaiting investigation.

Speaking to ONTV, Gamal Eid described the decreed as a positive step, but highlighted problems posed by the decree’s ambiguous wording. Eid said it would be near impossible to determine which "crimes" had been committed in "support of the revolution", and which hadn’t. He added that protesters were often arrested and tried on charges of insulting the military, and so it is essential that the decree applies to them as well. Eid called for the decree to be a blanket pardon in the true sense of the word, as well as calling for those convicted on crime-related charges to be retried before civilian courts.

The timing of the decree has also been questioned, coming days before a protest planned for October 12, spearheaded by several liberal political parties. The release of all political prisoners is among the protest’s several demands. These claims have been dismissed by Muslim Brotherhood members, among them the organization’s spokesman, Mahmoud Ghozlan.

The decree was issued on the eve of the first anniversary of the Maspero massacre, and was seen by some as an attempt to eclipse the events of October 9th, during which 27 predominantly Christian protesters were killed during clashes with the military, in one of the bloodiest nights witnessed during the transitional period. A memorial march beginning in the neighborhood of Shubra making its way to the site of the clashes at Maspero has gone on as planned, with thousands taking part.

The decree also comes on the heels of Morsi having to defend his first 100 days in office. During his almost 2 hour speech marking the anniversary of the 1973 war with Israel, Morsi made little mention of the occasion itself, and focused instead on his achievements. The timing has also led many to the conclusion that it is little more than a distraction from the current state of affairs in Egypt, and Morsi’s unfulfilled promises from his electoral platform.

The pardon is a step in the right direction, but it is only the very first step that can be taken. Reservations regarding the decree mirror the same reservations that were expressed when Morsi first tasked a committee with studying the cases of military trial convicts. At the time, pardons were limited only to ‘protesters’, ignoring the cases of alleged criminals or baltageya. That same differentiation exists with Morsi’s decree, and civilians brought before military courts on non-protest related charges will not be granted clemency. Human Rights Watch researcher Heba Morayef told AFP the decree “allows for wriggle room and leaves the door open for [authorities] to say these are not revolutionaries.”

While the decree does not apply to protesters arrested during clashes last month at the Syrian and US embassies, Morsi’s legal consultant Mohamed Gadallah said that it will include military officers arrested for their participation in the revolution, popularly known as the April 8 Officers.

No to Military Trials co-founder Mona Seif points out that the decree ignores the fact that civilians should not be brought before military courts. On Twitter she said, “We will thank Morsi when he issues legislation which brings an end to military trials for civilians.”  The families of those ‘pardoned’ have also taken issue with the wording of the decree, as it indicates that a crime was committed.

While many have been quick to criticize the decree’s shortcomings, others have praised Morsi’s move, among them human rights lawyer Nasser Amin. Speaking on Egyptian satellite channel, al-Mehwar, Amin said, “This decree is one of the best, the president deserves to be saluted.” Presidential candidate Khaled Ali added the decree to the list of Morsi’s moves which will contribute to achieving the revolution’s goals, while Hamdeen Sabahy also welcomed his decision.

Read the full text of the decree here.