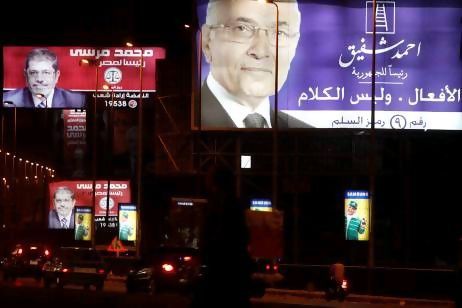 Whoever emerges as the winner of the Egyptian presidential elections on June 16-17 will have to urgently address the state of the economy, which has sharply deteriorated since the toppling of Hosni Mubarak last year. Unemployment, inflation, currency crisis, and public sector debt are just some of the pressing issues that the newly elected president will have to face.  The question on the minds of both Egyptians and the international community is will Mohamed Morsy and Ahmed Shafik, two polarizing figures in Egypt’s presidential elections, adopt effective economic policies to handle the immediate economic crisis and secure adequate foreign financing and investment. While both candidates are busy with winning the runoff election on June 16-17, they have so far only engaged in general economic rhetoric, as reflected in their manifestos and public appearances.

While the focus has been mainly on democratic change, the ongoing political instability and reoccurring violence have significantly harmed the economy, evident in a decline of net foreign direct investment from an inflow of $6.4 billion in 2010 to an outflow of $500 million in 2011. Many foreign investors and contractors that were awarded projects under the Mubarak regime remain skeptical as to whether they would be allowed to operate under the new government. Furthermore, instability has caused growth to fall to only about 1 percent in 2012 from over 5 percent in 2010, increased the official unemployment rate from 9 percent in 2010 to 12.4 percent in 2012, widened the budget deficit for fiscal year 2011/2012 to 8.6 percent and reduced foreign reserves by more than $20 billion to a low of $15.2 billion at the end of April 2011.

On the economic front, Shafik is campaigning as a strong military man who vows to restore security to attract tourism and foreign direct investment. On the other hand, Morsy is campaigning on a broad pro-growth, pro-privatization, pro-tax reform, and pro-agriculture platform. He has also adopted the strategy of the Muslim Brotherhood’s Freedom and Justice Party (FJP) based on social justice and populist economic policies to correct the inequalities of income and wealth. Although both candidates support a free market economy, they have not identified specific measures that they would undertake if elected president beyond generalities, such as encouraging foreign investment, eliminating red tape for businesses, and instituting a progressive tax system. Both Morsy and Shafik also support increases in public spending on food subsidies, healthcare, education, and national projects. Again there is no clear plan provided by either candidate of how these increased expenditures would be financed—through increased taxes, foreign grants, or by higher domestic and foreign borrowing.

Morsy’s campaign speeches do not seem to suggest a radical departure from the policies and programs advocated by more secular groups, although he does emphasize social services, microloan programs, subsidies for lower income homes, fair wages, and health insurance for workers. To accommodate the middle class segment of the FJP, Mosry has said he is committed to private enterprise and to liberalizing Egypt’s economy.  He has expressed his support for the Brotherhood’s Nahda (Renaissance) project, stressing that it has the capacity to reduce unemployment and improve living standards. Morsy’s economic platform offers specific indicators he plans to achieve if elected president. These include: reduction of unemployment to 7 percent by 2016, cut inflation, now hovering around 9 percent, to half of the long-term GDP growth rate, reduce public sector debt by 15 percent, and lower the fiscal deficit to around 6 percent. Furthermore, Mosry has said he will offer interest-free loans to farmers and allocate $8.3 billion to the poultry and fishing industries. Finally, Morsy pledged to increase investment to 30 percent of GDP, agreed to meet with investors, and promised to set up 100 national projects with investments of $1 billion. What specific policies will be followed to achieve these ambitions is still unclear.

Furthermore, what Morsy has not done is spell out the role that political Islam will play in the formation of economic policies other than proposals for a Zakat fund which would distribute money to the needy and financed by a wealth tax of 2 percent. He has also said he supports the Shariah-based ban on interest (Riba). In that case, how will the Islamic financial system co-exist with conventional interest-based banking? Will foreign borrowing on an interest basis be permitted or not? Such questions are certainly on the minds of investors since the answers will determine whether Egypt will be a hospitable environment for investments as it was in the last years of the Mubarak regime.

Compared to Morsy’s economic platform, Ahmed Shafik’s economic plan has even fewer details. The question in his case is whether he will go back to the pre-2004 era of a statist, tightly-regulated, and closed economic system, or continue with post-2004 market-oriented liberal policies adopted by the then Prime Minister Ahmed Nazif and his technocratic cabinet. In this regard, Shafik, who served as the last Prime Minister under Mubarak, has indicated he will support an open economy with private-led growth but with social safeguards. He has said he is broadly in favor of public/private sector partnerships, and aims at higher foreign investment and achieving a budget deficit of less than 6 percent of GDP by the end of his term, currently projected at 10 percent of GDP this year. He has also said he would keep the Egyptian pound’s exchange rate stable and would end energy subsidies while maintaining food subsidies. In terms of infrastructure projects, Shafik plans to develop renewable and nuclear energy, create new residential and industrial cities and build water purification plants. He also said to set a minimum wage, double the health budget, and extend health insurance benefits “regardless of cost”. Finally, Shafik signaled that he would assure a "fair price" for farm products and write off debts of small farmers. He has stressed developing strategic foreign relations, with priority given to Gulf countries, particularly Saudi Arabia, with the hope that the richer Arab countries will provide sufficient funding to finance his economic agenda.

Regardless of who is elected Egypt’s next president, the ideal road to economic progress will be in finding the difficult balance between promoting a market economy with private sector involvement while enhancing social safety nets and the mechanisms necessary for just distribution of income and wealth. Morsy and Shafik differ in their approaches to economic recovery and the way they plan to implement and achieve this overarching goal. What one is likely to see is a mixture of populism to respond to the immediate demands of the voters, and economic reforms that Egypt needs to carry out to develop the economy. Either president will face enormous difficulties and will have to respond to political forces pushing for or against the policies they choose to follow.

One of the more contentious economic issues has been the $3.2 billion IMF loan offered back in June 2011. The loan is necessary in light of the looming balance of payment crisis and requires a passing of a plan to cut state spending, which has so far been rejected overwhelmingly by Egypt’s parliament. In theory, Egypt could afford higher social spending without adding to a fiscal deficit if it reduces corruption and enacts subsidy reforms. These, however, are long-term goals that would not solve the immediate external deficit problem. In the short-run, the IMF loan, which in turn could generate additional donor financing, could help Egypt plug its growing balance of payments deficit and help the buildup the country’s foreign exchange reserves.

But however lenient the IMF’s conditions are for any loan, they would surely include requiring the new government to reform the subsidy system, enact appropriate monetary and exchange rate policies, financial sector policies, and transparency measures. Will such conditions be acceptable to either of the two candidates? This is an open question right now, but there will be a lot of pressure on the new Egyptian government from the markets and bilateral donors to sign up to an IMF program. It is likely that Egypt will have to do so eventually and sooner would be better than later.