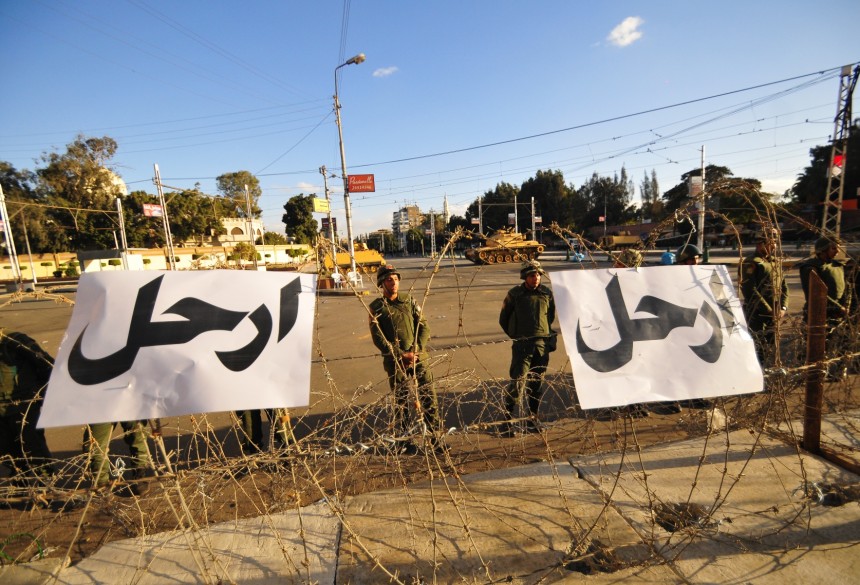 For live updates on protests around Egypt, click here.

Despite the president’s attempts to calm the conflict, reactions to the speech by politicians and representatives of civilian groups have been broadly negative.

Morsi calls for dialogue, promises to root out ‘financiers’ behind clashes
In his speech, Morsi promised that the prosecutor general would uncover the instigators and financiers behind this recent bout of violence, which had erupted over political disagreements that “could have been resolved through dialogue.” He alleged that, "sadly," it had been discovered that several of those arrested during the clashes had ties to political groups. Dangerous circumstances that pose “massive danger to stability” had prompted him to issue the controversial constitutional declaration that granted him sweeping powers, Morsi continued, claiming that the decree allowed the constitution to be finished and put up to a popular referendum. [Egypt Independent, Ahram Online, SIS, 12/6/2012]

Civil powers condemn Morsi’s speech, may boycott meeting
Despite the president’s attempts to calm the conflict, reactions to the speech by politicians and representatives of civilian groups have been broadly negative. Some called the speech shallow, failing to address the two major demands of the opposition: rescinding the presidential decree that shields Morsi’s decisions from judicial oversight or challenges; and postponing the constitutional referendum scheduled for 15 December. The National Salvation Front issued a statement rejecting the invitation to hold dialogue after Wednesday’s events, which it had accused the Muslim Brotherhood of inciting.[Egypt Independent, Reuters, Ahram Online, EGYNews (Arabic), 12/7/2012]

Foreign reserves take hit in November; politics, low tourism to blame
Foreign cash reserves held by the Central Bank of Egypt dropped by US$448 million in November, falling from $15.483 billion at the end of October down to $15.035 billion. The 2.8 percent drop was brought on by Egypt’s efforts to repay its foreign debts as well as government attempts to stockpile strategic goods and petroleum products, which increased state expenditures, say economists. [Egypt Independent, Ahram Online, 12/6/2012]

Egypt raises the price of subsidised gas cylinders
The Egyptian government has raised the price of subsidised butane cylinders to over double their price, starting at the beginning of December, limiting the scope of those benefiting from the subsidy. The decision was announced in the official gazette on 2 December, but has received very low media coverage. [Ahram Online, 12/6/2012]

Opposition protesters flock to presidential palace
Protesters against the 22 November constitutional declaration and the draft constitution began to gather at the presidential palace in Heliopolis Friday afternoon, as marches began toward the palace from across Cairo. Hundreds marched from Mostafa Mahmoud Mosque in Mohandiseen to the presidential palace to participate in the demonstration, dubbed “Red Card,” a reference to a football penalty removing players from the game. The Constitution Party and the Popular Current participated in the march. [Egypt Independent, AP, EGYNews (Arabic), 12/7/2012]

Islamist movements to rally outside Media Production City
Islamist political forces have called for a protest outside Media Production City in 6 October City Friday, citing the "inciting role" of some channels. Sixteen parties and movements, including the Salafi Front, the Construction and Development Party and the Peace and Development Party, called for the demonstrations, while the Muslim Brotherhood and leading Salafi parties did not immediately say whether or not they would take part. [Egypt Independent, DNE, Shorouk (Arabic) 12/7/2012]

Brotherhood: Interior Ministry to blame for destruction of headquarters
Interior Minister Ahmed Gamal Eddin is responsible for the burning of the Muslim Brotherhood’s headquarters in Moqattam, Brotherhood Secretary General Mahmoud Hussein told state-run news agency MENA on Thursday. The headquarters were broken into and set ablaze because of the "security forces’ reluctance to confront attackers," Hussein said. He alleged that security forces watched protesters set the building on fire without intervening. For an eyewitness account of the attack on the FJP headquarters in Maadi, please click here. [Egypt Independent, DNE, 12/7/2012]

154 detained after deadly clashes, prosecutor continues investigations
A total of 154 protesters have so far been detained on charges relating to the violent clashes that took place outside the presidential palace in Heliopolis on Wednesday night, leaving five dead and over 1,000 injured. At least 49 of the detainees were brought to the Heliopolis police station by the Muslim Brotherhood. Initial investigations allege that five of the detainees are Muslim Brotherhood members while the rest come from the opposition. Two of the detainees have gone on a hunger strike in protest. [Egypt Independent, 12/6/2012]

Concrete Wall to Protect Presidential Palace Before Friday Protest
Egypt’s Military Corps of Engineers built a concrete wall on Friday morning at Heliopolis Club in front of the presidential palace in Cairo amid heavy deployment of the Republican Guard around the palace, the state news agency reported. The Republican Guard restored peace on Thursday to the area surrounding the palace following violent clashes that erupted on Wednesday leaving six people dead and hundreds injured. [Aswat Masriya, 12/7/2012]

UN: Egypt must protect peaceful protesters
Egypt’s government must protect peaceful protesters and prosecute anyone inciting violence, including government members, UN Human Rights Commissioner Navi Pillay said on Thursday. "People have the right to protest peacefully and they have the right not to be killed or injured for doing so,” she said. She welcomed President Morsi’s call for dialogue on Thursday but regretted there was no significant progress on the core issues relating to the Constitution.  [Egypt Independent, Reuters, Shorouk (Arabic), 12/6/2012]

Obama concerned over Egypt deaths, welcomes Morsi’s call for dialogue
US President Barack Obama expressed “deep concern” Thursday over the recent deadly political protests in Egypt, in a call to his counterpart Mohamed Morsi, the White House said.
Obama also told Morsi that it was “essential for Egyptian leaders across the political spectrum to put aside their differences and come together to agree on a path that will move Egypt forward,” the White House said in a statement. Seven people died in clashes between Morsi’s supporters and his mainly secular opponents on Wednesday in Egypt’s worst political crisis since Morsi took office in June. [AFP/DNE, Reuters, Ahram Online, 12/7/2012]