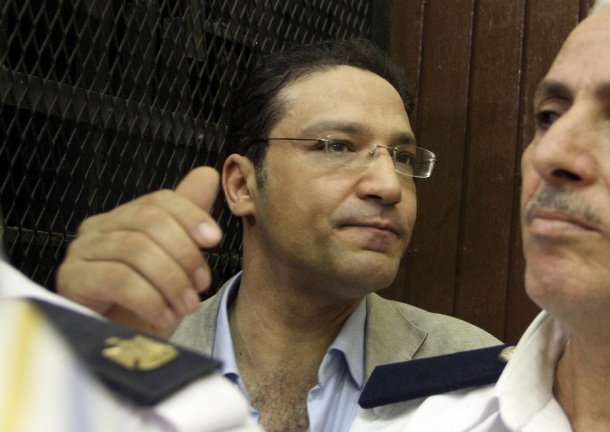 Giza Criminal Court on Thursday ordered Al-Dostour Editor-in-Chief Islam Afify detained until it reconvenes to review charges that he insulted President Mohamed Morsy. During its first session, the court adjourned the case until 16 September, after Afify’s defense team asked for more time to study the allegations. Afify pleaded not guilty to the charges read in court Thursday.

[Egypt Independent, 8/23/2012] Presidential spokesperson Yasser Ali on Wednesday addressed a wide range of issues currently facing President Mohamed Morsy, from the members of his presidential team to the conflict in Syria. Ali denied media reports that had published named rumored to be included in Morsy’s presidential team. “The only two confirmed names are Samir Morkous and Pakinam al-Sharqawy,” he said. On the subject of Morsy’s meeting with the head of the Shura Council, Ali said the president and the parliamentarian discussed social issues.

[Ahram Online, 8/23/2012] A number of Egyptian intellectuals are planning a protest tomorrow Thursday 23 August. The protest, which will start from Talaat Harb Square downtown in the evening, aims to send a clear message about the position of intellectuals in relation to the draft constitution being prepared, in particular to the sections related to freedom of expression, creativity, thinking and the press. The protest is the first action by a new initiative, Protecting the Egyptian Mind, involving a number of intellectuals including renowned writer Ibrahim Abdel-Meguid, artist Mohamed Abla, critics Sabry Hafez and Mohamed Badawi, writer Abla El-Roweini, professor Sherine Abul-Naga, publisher Fatma El-Budy and a number of other poets and intellectuals.

[Egypt Independent, Ahram Online, AFP, 8/23/2012] The government should not borrow from the International Monetary Fund to boost the country’s cash reserve, the Salafi Nour Party stated on Wednesday.  “Borrowing from abroad is usury,” said Younis Makhyoun, a member of the party’s supreme committee. “God will never bless an economy based on usury.” Mahkyoun called on Prime Minister Hesham Qandil to find other ways to raise funds instead of “allowing foreigners to interfere in our affairs.” The Freedom and Justice Party (FJP) will study the terms of the proposed International Monetary Fund (IMF) loan before announcing its position on the matter, Mohamed Gouda, official spokesperson of the party’s economic affairs committee, said in a statement on Thursday. Qatar has also paid Egypt $500 million, the Egyptian Finance Minister announced on Thursday, in the first installment of $2 billion of financial support the Gulf state had promised to Cairo.

Egypt struggles to buy fuel as credit dries up

[Reuters, 8/23/2012] Egypt is finding it increasingly difficult to import fuel as foreign banks and traders pull the plug on credit and charge high premiums due to concerns over its financial and political stability, trading and banking sources said. Sporadic international loans have so far helped, and the country requested up to $4.8 billion from the International Monetary Fund (IMF) on Wednesday, but without such ad-hoc interventions, Egypt could quickly end up like debt-stricken Greece, dependent on a narrow pool of traders charging richly for supplies.

[Reuters, 8/23/2012] Rating agency Standard & Poor’s on Thursday eased off the possibility that it would cut Egypt’s sovereign rating soon as the country’s political and military leadership move toward working together. S&P removed Egypt’s long-term ratings from CreditWatch, where they had been placed with negative implications earlier this year. The rating agency also affirmed Egypt’s B long-term sovereign credit rating, albeit maintaining the negative outlook.

[Egypt Independent, 8/23/2012] Salafi Nour Party MPs and scholars started holding seminars Wednesday evening in North Sinai governorate for four days in an effort to combat "Takfiri" ideology, which authorities say is behind the violent incidents the governorate has recently witnessed. State-run news agency MENA said that the meetings and discussions aim to explaining the true teachings of Islam. The Salafi delegation mainly represents the Nour Party’s Shura Council bloc. MENA quoted members of the delegation as saying that the group would visit several parts of the governorate and the border areas, as well as meeting with security leadership.

[Egypt Independent, Ahram Online, AP, EGYNews (Arabic), 8/23/2012] Giza Criminal Court on Thursday ordered Al-Dostour Editor-in-Chief Islam Afify detained until it reconvenes to review charges that he insulted President Mohamed Morsy. During its first session, the court adjourned the case until 16 September, after Afify’s defense team asked for more time to study the allegations. Afify pleaded not guilty to the charges read in court Thursday. Some lawyers and journalists attended the session in solidarity with the editor. President Morsi has reportedly ordered Minister of Justice Ahmad Makki to search for a legal solution to free Afify. The Egyptian Organisation for Human Rights (EOHR) has released a statement condemning the confiscation by authorities of the Wednesday edition of weekly newspaper Al-Shaab, which is affiliated with Egypt’s Islamist-leaning Labour Party. The case against Islam Afifi of the privately-owned el-Dustour daily is one of several lawsuits brought mainly by Egypt’s Islamists against journalists, accusing them of inflammatory coverage and inciting the public against the Muslim Brotherhood.

[Egypt Independent, Ahram Online, 8/23/2012] Egypt’s Interior Ministry on Wednesday warned organizers planning a campaign of protests against President Mohamed Morsy on 24 August that it would respond "decisively" to any violence. Police "will decisively and legitimately confront any attempt to storm or attack any public or private installation, detain workers in them or cause chaos," the ministry said in a statement. The call was at first perceived as a feeble attempt by a former regime loyalist to make a comeback of sorts. It was quickly transformed into an anti-Brotherhood protest, however, when it was picked up by others whose fear of the Brotherhood was heightened after President Mohamed Morsi retired Egypt’s military rulers earlier this month.

[Ahram Online, Al-Jazeera Mubashir (Arabic), 8/23/2012] President Mohamed Morsi will make his first official visit to Beijing next week, China’s foreign ministry has said. "This will be President Morsi’s first visit to China since taking office, and China attaches great importance to it," foreign ministry spokesman Hong Lei said in a statement late Wednesday. China and Egypt will sign cooperation agreements and discuss regional and international issues of mutual interest, Lei said, without giving details. Trade between the two countries totaled $8.8 billion last year, up 40 per cent from 2008, according to the Egyptian Ministry of Commerce.

[Egypt Independent, Ahram Online, Al-Jazeera Mubashir (Arabic), 8/23/2012] The normalization of relations with Iran is a sovereign decision for Egypt to make, said US State Department spokesperson Victoria Nuland on Wednesday. Nuland continued that Washington’s message to the leaders attending the Tehran Non-Alignment Summit is to express the Americans’ concerns about their nuclear program. Israel on Thursday warned UN chief Ban Ki-moon and other world leaders not to fall into an Iranian propaganda "trap" when they attend a summit of the Non-Aligned Movement in Tehran next week.