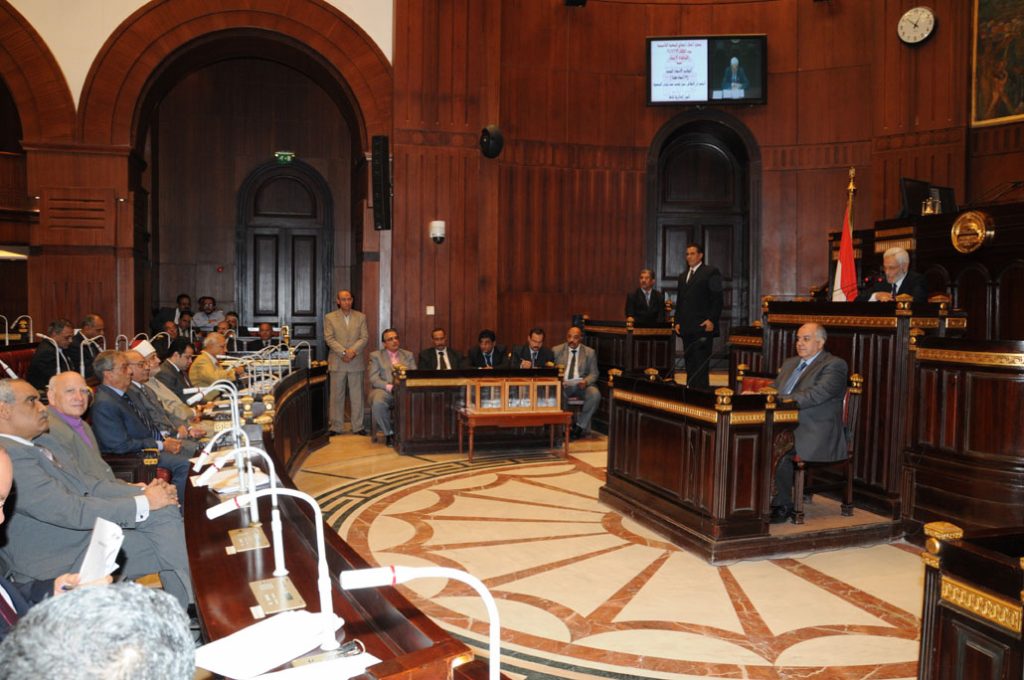 The head of the Constituent Assembly said Monday that the body would complete a draft of the new constitution in early or mid-November, adding that if a court dissolves it before then, the next assembly could use its work as a starting point.

Vice president says corruption in presidency revealed soon
Vice President Mahmoud Mekky told chief editors of several newspapers in a meeting on Monday that the results of a corruption investigation into the presidency would be revealed soon. Mekky did not name any officials involved in the alleged corruption. Public Prosecutor Abdel Meguid Mahmoud had ordered on Saturday the investigation of a complaint against President Mohamed Morsy accusing him of profiteering and transferring gains to businessmen affiliated to the Muslim Brotherhood in order to refund LE2 billion borrowed for his presidential campaign. [Egypt Independent, 10/1/2012]

Essam al-Erian withdraws candidacy, El-Katatny to contest FJP leadership
Veteran Islamist politician Essam al-Erian has announced his withdrawal from the electoral race to choose a new chief for Egypt’s biggest political party after Saad al-Katatny, former speaker of the People’s Assembly, has announced that he will run for the post. Mohamed Abu Baraka, the FJP’s lawyer, also announced his intention to stand on Monday during an interview with the Sada El-Balad satellite channel. Dr. Sabah al-Saqqari is the first woman to nominate herself for the position. [Egypt Independent, Daily News Egypt, Ahram Online, Ahram (Arabic), 10/2/2012]

Nour Party to form reconciliation committee, continue elections
Nour Party spokesperson Nader Bakkar said 98 percent of party members have voted in favor of an initiative to reform the party and end internal disagreements. At a press conference held on Monday, Bakkar said the initiative was launched at a meeting for party members, who agreed on the formation of a committee to manage the party’s internal crisis and examine the complaints made by members after a dispute erupted recently over the party’s leadership. Party president Emad Abdel Ghafour, however, denied any current efforts for mediation. [Egypt Independent, Ahram (Arabic), EGYNews (Arabic), 10/2/2012]

Gheriany says Constituent Assembly to complete draft in November
The head of the Constituent Assembly said Monday that the body would complete a draft of the new constitution in early or mid-November, adding that if a court dissolves it before then, the next assembly could use its work as a starting point. An administrative court is expected on Tuesday to resume hearing a case calling for the dissolution of the assembly on the grounds that MPs were selected for it. [Egypt Independent, 10/1/2012]

Protests against draft constitution on Tuesday
Three separate protests against elements of Egypt’s draft constitution will be held on Tuesday to coincide with an expected court ruling on the status of the Constituent Assembly. A protest against the draft constitution’s Article 36, which focuses on women’s issues, will take place at the Shura Council. A second protest, by judges at the State Litigation Authority, will focus on a being accorded the same status as judges in other courts and reject "bias" against them in the new constitution. The third protest, called for by Auditors Against Corruption (AAC), will protest Article 5 of the draft constitution which deals with the status of the Central Organisation for Auditing (COA). [Ahram Online, Shorouk (Arabic), 10/2/2012]

Egypt’s growth means importing gas, Qatar and Iraq probable sellers: Expert
Egypt is destined to become a net importer of natural gas if the government hits the economic growth targets it has promised, making lining up overseas resources a must, a local energy expert has told Ahram Online. The new government’s pledge for 5-6 per cent growth by 2015 will inevitably mean tapping foreign energy sources, with Qatar and Iraq the best candidates, he says. [Ahram Online, 10/2/2012]

Brotherhood forms committee to support Syrian uprising, rumors of delegation visit
Egypt’s Muslim Brotherhood has formed a committee to support the Syrian uprising, led by Mohamed Abdel Rahman, a member of the Guidance Bureau. Its mission is to document the revolution in the media, find supporters for the Free Syrian Army (FSA), and assist refugees and displaced Syrians. Mahmoud Ghozlan, Muslim Brotherhood spokesperson denied sending members to Syria to join the FSA and fight against President Bashar al-Assad’s regime. [Egypt Independent, AP, 10/2/2012]

Amnesty Calls On Egypt To Tackle Legacy Of Abuse
Amnesty International warned Tuesday that abuses by Egyptian police and military continued with impunity after regime change and Hosni Mubarak’s ouster, and urged the country’s newly elected leader to deal with this "bloody legacy" by bringing to justice those responsible for killing, maiming and abusing protesters. Two extensive reports released by the London-based human rights group in Cairo on Tuesday detail cases of rights abuses by the troops after Mubarak left office in February 2011, focusing on six separate incidents of crackdowns that killed at least 120 protesters. [AP, 10/2/2012]

Obama seeks to unblock US$450 mn in aid for Egypt
US President Barack Obama’s administration said Monday it is trying to convince the US Congress to unblock about US$450 million in economic aid for Egypt after Republican Congresswoman Kay Granger froze the funds. State Department spokeswoman Victoria Nuland confirmed the US administration had asked Congress to free up the money in two installments to support the government of Mohamed Morsy, the first democratically elected president of Egypt. [Egypt Independent, Ahram Online, 10/2/2012]