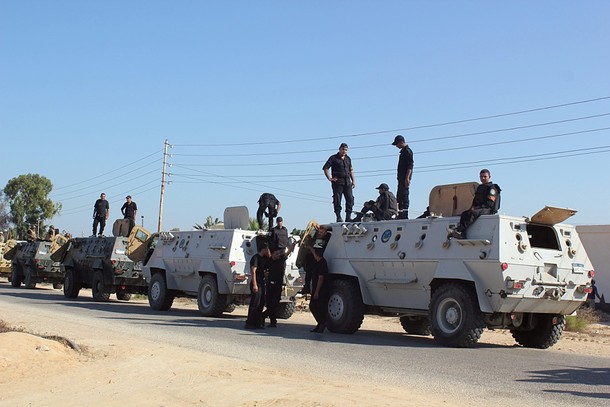 Major military reinforcements arrived to the outskirts of El-Arish in Sinai Thursday morning coming from the Second Field Army Command in Ismailiya. The reinforcements sent to the border city with Israel include armoured vehicles, tanks and missile batteries in addition to hundreds of soldiers.

[AFP/Ahram Online, Al-Shorouk (Arabic), 8/9/2012] Police and gunmen clashed Thursday in the Sinai town of El-Arish, Egyptian TV said after authorities vowed to crush a surge in Islamist militancy, although the state news agency MENA denied the report. The state-owned Nile News television said there were clashes outside a police station in the north Sinai town a day after reported air strikes killed 20 militants in a neighbouring village. However, MENA said later that a "security official denied reports that the … police station in El-Arish came under fire," in an account backed by witnesses who said they did not see or hear any clashes.

[Ahram Online, EGYNews (Arabic), 8/9/2012] Major military reinforcements arrived to the outskirts of El-Arish in Sinai Thursday morning coming from the Second Field Army Command in Ismailiya. The reinforcements sent to the border city with Israel include armoured vehicles, tanks and missile batteries in addition to hundreds of soldiers. The reinforcements come as part of "Operation Eagle," launched in August 2011 and originally aimed at securing vital establishments in Sinai. Since a security vacuum opened in Egypt with the fall of the security apparatus of the Mubarak regime there has been a mutual understanding between Egypt and Israel concerning the necessity of raising the number of Egyptian soldiers in Sinai.

[Daily News Egypt, Al-Ahram (Arabic), 8/8/2012]Egyptian police have arrested a Canadian student in Sinai on suspicion of involvement in an ambush that killed 16 soldiers, security officials said on Wednesday. A Canadian embassy official said he could not confirm or deny the arrest, due to privacy reasons. Egyptian security can be suspicious of foreigners and has arrested several over the past year on suspicion of spying or involvement in unrest, eventually releasing them.

[El Watan, 8/9/2012] Sources close to Field Marshal Mohamed Tantawi have confirmed that the Minister of Defense and head of the Supreme Council of the Armed Forces (SCAF) has issued a decree reinstating former military police chief Hamdi Badeen as advisor to the military for Sinai affairs. Morsi dismissed Badeen yesterday as part of a wider reshuffle of security personnel.

[Ahram Online, Al-Ahram (Arabic), 8/9/2012] Despite government promises that pervasive power cuts hitting the country since the start of the fasting month of Ramadan would be brought to an end, Thursday morning saw one the most serious power cuts yet. Lasting for two hours, it spread out throughout the country, affecting the underground Metro, hospitals and even the Cairo Stock Exchange. Shortages in gas and diesel led to a malfunction in the second circuit power plant at El-Asher Men Ramadan, leading to the shut down in different areas in Cairo and other governorates, official sources told the press.

[Ahram Online, 8/9/2012] Egypt’s annual urban inflation hit 6.4 per cent in the twelve months to July 2012, according to figures from the Central Agency for Statistics and Mobilisation (CAPMAS). This is the lowest level for the indicator since a popular uprising unseated Hosni Mubarak in February 2011. The inflation figure is down from 7.3 per cent in the year to June, and 8.3 per cent to May. Slowing growth in food prices caused the dwindling rate of inflation. Food items carry the heaviest weight in the inflation index.

[Ahram Online, 8/9/2012] Ikhwanonline, the official website of the Muslim Brotherhood, released a press statement Wednesday regarding Sunday’s Sinai attack, calling for a reassessment of the Camp David treaty. The statement urges the Armed Forces to focus on its sole mission of protecting Egypt and its borders and for the enforcement of a law criminalising corruption and those who seek to incite violence. The group’s statement pointed out that some individuals with anti-Egyptian agendas have used the recent attack in Sinai to promote political disputes.

[Ahram Online, Al-Akhbar (Arabic) 8/9/2012] Several Egyptian writers and journalists left their columns blank Thursday in independent newspapers, protesting what they considered an attempt from the Muslim Brotherhood to control state owned newspapers and publications. On Wednesday, the Shura Council announced the names of editors-in-chief of state owned publications. Many journalists reject that the Shura Council hold power of appointment of such head positions, believing this was abused by the ruling party in the past to control the state owned media.