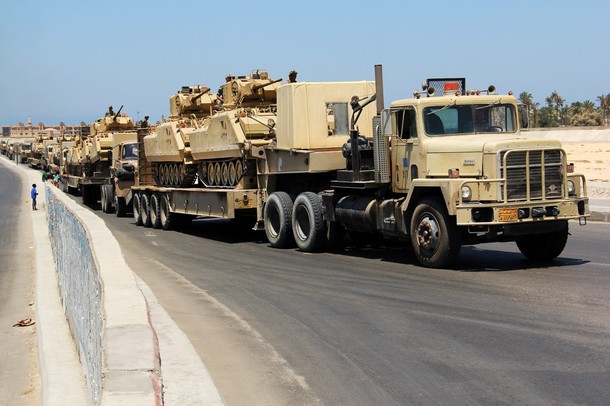 Israeli officials say Egypt is violating their 1979 peace treaty by deploying tanks in the demilitarized Sinai desert. The officials said Tuesday they have made their objections known to the Egyptians directly and through American mediators.

[Ahram Online, Ahram Gateway (Arabic), 8/22/2012] President Mohamed Morsi has appointed a Christian, a woman and a Salafist to his presidential team, the Muslim Brotherhood’s Misr 25 TV channel reported on Tuesday. Samir Marcus, a prominent Christian thinker; Pakinam El-Sharkawy, professor of political science at Cairo University, and Emad Abdel-Ghafour, Salafist Nour Party leader, are the new appointees. Presidential spokesperson Yasser Ali told the Al Jazeera Mubasher Misr TV channel on Tuesday that the presidential team would be officially announced before the president’s trip to China on 27 August and that only one vice president would be appointed.

[Egypt Independent, 8/21/2012] Ahmed Idris, the investigating judge appointed by the justice minister to review cases of former officials who had acquired state-owned land, has reached an agreement with the defendants after they agreed to give up the land in question in exchange for not being prosecuted, judicial sources told Al-Masry Al-Youm. The defendants, who include former Minister of Agriculture Amin Abaza, former Organizational Secretary of the National Democratic Party Ahmed Ezz and 30 members of the now-dissolved party, all offered to waive the rights to the land they had acquired. Hany Abdel Aziz, former advisor to the housing minister, also offered to relinquish 200 acres worth LE1 billion. He is facing charges involving the alleged sale of a natural reserve to several businessmen.

[Al Masry Al Youm (Arabic), 8/21/2012] About 300 lawyers, most of them belonging to the Freedom and Justice Party, organized a protest in front of the prosecutor’s office in front of the Supreme Constitutional Court, on Wednesday afternoon. Joined by some independent lawyers, they objected to the referral of lawyers Nasser al-Hafi, a former member of parliament, and Abdel-Moneim Abdel-Maqsud, a lawyer for the Muslim Brotherhood, to the Criminal Court on charges of insulting the Supreme Constitutional Court judges regarding the case in which it dissolved the People’s Assembly. Al-Sayyid Hamid, a member of the Freedoms Committee in the Lawyers Syndicate said, "al-Hafi and Abdel-Maqsud were referred to the Criminal Court at a time when Supreme Constitutional Court judges have not responded nor been investigated for the charges against them."

[Ahram Online, Ahram Gateway (Arabic), 8/22/2012] The trial of Al-Dostour newspaper’s editor-in-chief Islam Afify on charges of insulting President Mohamed Morsi and publishing inaccurate information will begin on Thursday at Giza Criminal Court. Hassan Badie, managing editor of Al-Dostour, accused the Muslim Brotherhood of being behind the charges and the decision to raid the offices. Al-Dostour is known for its anti-Brotherhood slant. Essam Sultan, vice president of the Wasat Party and former member of the dissolved People’s Assembly, criticized the legal framework for the trial saying that Article 179 of the Penal Code which provides for the punishment of insulting the President imprisonment "falls under suspicious legal texts."

[Ahram Online, Reuters, 8/22/2012] Egypt has formally requested a $4.8 billion loan from the International Monetary Fund, the presidential spokesman said on Wednesday during a visit to Cairo by IMF chief Christine Lagarde. International Monetary Fund (IMF) Managing Director Christine Lagarde arrived in Cairo on Wednesday to reopen fresh discussions on a fiscal package, after year-long negotiations between Egypt’s government and the international financial organisation. Few details about the programme have been made public, however Egypt’s Finance Minister Momtaz El-Said told Al-Ahram daily on Tuesday that one of the main focuses will be making subsidies more efficient

[Egypt Independent, Ahram Online, 8/22/2012] The Chamber of Food Industries is blaming the Health Ministry for a bottled water shortage after the ministry ordered seven companies shut down in June, when they failed tests of their well water. In response to the accusation, the ministry stood by its decision, telling Al-Masry Al-Youm on Tuesday that the companies had violated health standards and tests showed their water was contaminated. people in the town of Sansafat in Egypt’s Menoufiya governorate were hospitalised on Tuesday after drinking poisoned drinking water. Angry citizens confronted Health Minister Mohamed Mustafa at the Manouf hospital, where the victims are undergoing treatment. The health minister and Ashraf Hilal, the governor of Menoufiya, were then held hostage by the victims’ families in the hospital for 45 minutes before being released by the police.

[AP, Egypt Independent, Ahram Online, Watan (Arabic), 8/22/2012] Israeli officials say Egypt is violating their 1979 peace treaty by deploying tanks in the demilitarized Sinai desert. The officials said Tuesday they have made their objections known to the Egyptians directly and through American mediators. Defense officials are in talks with Egyptian counterparts in hopes of resolving the disagreement over deployment. An Egyptian military source, Sunday, rebuffed what he qualified as "the noise that is coming out of the Israeli media." The military source said, “Operation Eagle” is, however, "well coordinated with both the Americans and Israelis." Presidential spokesperson Yaser Ali assured the press that Egypt has not officially responded to these accusations.

[Egypt Independent, Al Masry Al Youm (Arabic), Youm7 (Arabic), 8/22/2012] A post that Essam al-Erian, the acting president of the Freedom and Justice Party, made on Twitter in which he accused leftist parties of receiving funds from abroad, submitting to foreign powers and ignoring the role of religion in society has sparked an angry response on Facebook and Twitter. Erian said that a number of reasons for the failure of leftists include submission to foreign influence and funding, contempt for religion, and maintaining its elitism and condescension towards the people. Dr. Rabab al-Mahdi, a professor of political science at the American University and prominent leftist, said that Erian’s accusations amounted to tactics used by the former ruling party.

[Egypt Independent, 8/22/2012] Three Sufi parties plan to contest the next parliamentary elections in association with a newly formed coalition of 31 other parties and public figures, Al-Masry Al-Youm quoted a leader of the religious order as saying Monday. The Sufi-oriented Nasr, Egyptian Renaissance and Egyptian Liberation parties will join politicians such as former presidential candidates Amr Moussa, Hamdeen Sabbahi and Ghad al-Thawra Party head Ayman Nour to compete for seats when new elections are held to replace the disbanded People’s Assembly.

[Reuters, 8/22/2012] Egypt’s President Mohamed Mursi will visit the United States on Sept. 23, making his first trip there since taking power in June, the presidential spokesman said on Wednesday. Long wary of Islamists, Washington opened formal talks with Mursi’s Muslim Brotherhood in 2011 as the group emerged as a major player in the political scene of the first Arab state to sign a peace treaty with Israel. U.S. Secretary of State Hillary Clinton met Mursi in Egypt during a visit in July. In July, U.S. President Barack Obama invited Mursi to the United States in September during the U.N. General Assembly meetings, but no date was announced.