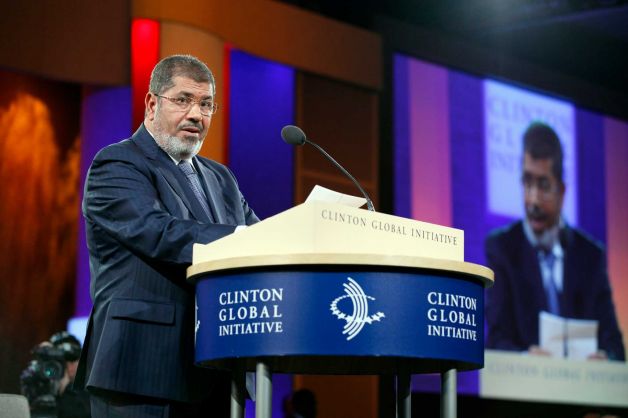 Political party leaders discussed Tuesday the possibility of coordinating their stances on the Constituent Assembly, accusing the Islamist majority of controlling the drafting of a new constitution.

Egypt’s Mohamed Morsi Stands Firm at the Clinton Global Initiative
In Mohamed Morsi’s first U.S. appearance since his June election as Egypt’s president, he took the stage at the Clinton Global Initiative to defend his nation’s transition toward democracy and to demand international help. “We need assistance—investment, technology, international cooperation,” Morsi told former president Bill Clinton and a near-capacity crowd at the closing session of the summit. “The situation in Egypt is stable. We are ready for tourism and investment.” [The Daily Beast, 9/25/2012]

Egypt’s Salafist Nour Party racked by internecine squabbles
Ongoing disputes within the Nour Party – over both leadership issues and ideology – appear far from settled, leaving the future of Egypt’s largest Salafist party hanging in the balance. The disagreements, which have recently burst into public view, have led to rifts within the party, the unity of which is now being harshly tested for the first time since its establishment in the wake of last year’s revolution. [Ahram Online, Egypt Independent, 9/25/2012]

Coptic group rejects constitutional proposal that Christians be subject to the church in family law
The dispute between Coptic and secular activists on one hand and Islamist political forces on the other over Article 2 of Egypt’s constitution – which states that Islamic Law is "the main source of legislation" – ended in compromise. While the article would remain as it was in Egypt’s 1971 constitution, two new articles would be added to the national charter – one making Egypt’s Al-Azhar the "exclusive reference" for issues related to Islamic Law, and another ensuring that Egypt’s Christians and Jews would be subject to their own confessional regulations concerning religious and personal-status issues. [Ahram Online, 9/26/2012]

Liberal parties meet to push Islamists on Constituent Assembly
Political party leaders discussed Tuesday the possibility of coordinating their stances on the Constituent Assembly, accusing the Islamist majority of controlling the drafting of a new constitution. The meeting brought together leaders from the Popular Current and Socialist Popular alliances and the Constitution, Ghad al-Thawra, Wafd and Egyptian Social Democratic parties. [Egypt Independent, Ahram (Arabic), 9/26/2012]

Three defendants referred to trial for insulting Christianity
Egyptian prosecutors have referred prominent Islamist Sheikh Abu Islam Ahmed Abdullah, owner of the Umma and Mariya television channels, to criminal court to face charges of defaming the Christian faith. The referral comes after two lawyers filed legal complaints accusing Abdullah of showing contempt for Christianity by burning copies of the New Testament in front of the US embassy in Cairo during protests in mid-September against a US-made film mocking Islam’s Prophet Mohamed. [Ahram Online, Egypt Independent, 9/25/2012]

3 Egyptians get jail time for Suez student’s June murder
A Suez criminal court on Tuesday sentenced three religious extremists, convicted of murdering a university student in Suez earlier this year, to 15 years each in jail. In court, the three men had denied allegations that were part of an extremist group that used violence against anyone who did not conform to their version of Islam. Prosecutors considered the crime premeditated murder. The prosecution also accused the three men of violating the law by establishing a group devoted to violating personal rights guaranteed by the law and constitution. [Ahram Online, 9/25/2012]

Ministry says fuel crisis easing after new supply from Bulgaria
The fuel shortages eased as Egypt on Monday received a new 32 ton shipment from Bulgaria at the Alexandria seaport, official sources at the Ministry of Supply and Internal Trade announced. The ministry sources assured that the new shipment will help solve the fuel crisis seen across most of the country’s provinces, adding that the supply will be pumped into the market immediately. [Egypt Independent, 9/25/2012]

UK to advise Egypt on quelling Sinai militants
Britain is to provide military advice to the Egyptian government to help it crack down on militants in the Sinai Peninsula who are destabilising relations with neighbouring Israel. In his first meeting with the Egyptian president Mohammed Morsi in New York, David Cameron will announce that Britain’s most senior military figure will travel to Cairo. General Sir David Richards, the chief of the defence staff, will lead a British effort that will also see a stabilisation team despatched to Egypt. [The Guardian, 9/25/2012]

Egyptian Copts reject population estimate
A Coptic Christian group has rejected a report by Egypt’s official statistics agency which estimated the community’s population at 5.13 million. The Coptic Church estimates the community at 15-18 million, the Copts of Egypt Coalition said in a statement on Tuesday. The Church’s statistics are more reliable than those of the Central Agency for Public Mobilisation and Statistics (CAPMAS), because it carries out population density checks every three months, the coalition said. [Ahram Online, Ahram (Arabic)  9/26/2012]

Egypt seeks to amend trade agreement with US, Israel
Egypt has entered negotiations with the United States and Israel to amend the Qualified Industrial Zones (QIZ) trade agreement, said Minister of Industry and Foreign Trade Hatem Saleh on Monday. “Egypt considers the QIZ a trade agreement, not a political deal,” Saleh said. “And we seek to achieve greater economic return from it.” [Egypt Independent, 9/25/2012]