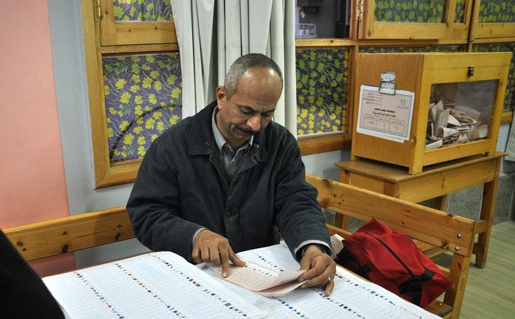 On Wednesday, the Shura Council passed the two laws on the House of Representatives and the exercise of political rights, but the vote on the final approval was postponed until Thursday’s session. All that remains is for the council to hold a final vote on the complete bill. All the bill’s articles have been voted on individually and passed.

Shura Council finalises elections law
On Wednesday, the Shura Council passed the two laws on the House of Representatives and the exercise of political rights, but the vote on the final approval was postponed until Thursday’s session. All that remains is for the council to hold a final vote on the complete bill. All the bill’s articles have been voted on individually and passed. The council redistricted electoral constituencies, making 91 constituencies for individual candidates and 48 for list candidates, for a total of 546 seats in the House of Representatives. They removed explicit legislation banning the use of religious campaign slogans from Article 13 and instead included a clause banning campaign slogans that “discriminate against citizens based on religion, origin, or gender”. They also voted to remove another clause from the same article banning “insulting a candidate or political party in any way” but banned interfering in a candidate’s private life. Article 42 bans serving members of the armed forces, police, and General Intelligence apparatus from contesting parliamentary polls. The passed bills will be referred to the Supreme Constitutional Court to rule on their constitutionality. If the court votes them down the upper house of parliament will have to amend them in accordance with the court’s notes. If the court approves the bills the council will then refer them to President Mohamed Morsi for him to sign into law. [DNE, Egypt Independent, Ahram Online, EGYNews (Arabic), Shorouk (Arabic), 4/10/2013]

FJP, opposition negotiating cabinet reshuffle, say sources
The Muslim Brotherhood’s Freedom and Justice Party is negotiating a cabinet reshuffle with the National Salvation Front, sources from both groups said Wednesday. Negotiations are focused on forming an efficient, neutral cabinet headed by an independent figure and also revolve around key points including the dismissal of the country’s top prosecutor and the drafting of a parliamentary elections law that ensures integrity, the sources said. However, administration spokesperson Ehab Fahmy denied any reshuffle is underway. According to an FJP source, the opposition coalition National Salvation Front nominated Arab League Secretary General Nabil al-Araby for prime minister. Araby, meanwhile, reportedly said in an interview with Al-Hayat channel program Al-Mawdoua that he was offered the post but refused. [Egypt Independent, 4/11/2013]

Egypt president withdraws all complaints against journalists
President Mohamed Morsi has discarded complaints filed by the presidential legal affairs department against certain journalists, said presidential spokesperson Ihab Fahmy in brief statement. The presidency did not provide further details on these complaints, which it said the department fielded. This move does not apply to complaints filed independently by Mursi loyalists against journalists and media figures. These include complaints that led to an arrest warrant being issued against the popular satirist Bassem Youssef. [Egypt Independent, Ahram Online, Reuters, Aswat Masriya, SIS, 4/10/2013]

State commissioners say Morsi case out of court jurisdiction
State commissioners of Egypt’s High Administrative Court have advised that ruling in an appeal to refer the president to criminal court over allegations of killing protesters is out of the court’s jurisdiction.  Hamdy al-Fakhrany had filed a lawsuit accusing Islamist President Mohamed Mursi of complicity in the killing of peaceful protesters in clashes between his supporters and opponents that broke out at the end of last year.  The State Commissioner’s Authority also asked the upper house of parliament to write a law to regulate the interrogation of the president and determine his punishment. Aswat Masriya, 4/10/2013]

Egypt’s government withdraws new public budget from Shura Council
Egypt’s government recently withdrew its public budget plan for Financial Year (FY) 2013-2014 from the Shura Council, 10 days after discussions within the country’s cabinet regarding the issue were supposed to have ended. A source within Egypt’s Finance Ministry said that the move came after discussions were held between the International Monetary Fund (IMF) and Egypt’s government regarding amendments that needed to be made to the budget regarding Egypt’s gross budget deficit, government revenues, and public spending. These discussions held that Egypt’s gross budget deficit should remain between 10% and 10.5%, with guarantees given that this number would decrease by 0.5% every year for the next three years. [DNE, 4/10/2013]

Libya gives Egypt $2 bln interest-free loan -MENA
Libya will give Egypt a $2 billion five-year, interest-free loan under an agreement signed on Wednesday, the Egyptian state news agency MENA reported. It quoted a finance ministry official as saying the loan would have a three-year grace period and was intended "to support the Egyptian economy and the state budget and foreign currency reserves". [Reuters, 4/10/2013]

Thirty-two suspects in Khusus, others in Abbasiya
Twenty new arrest warrants issued Wednesday brought the number of suspects in the sectarian violence in Khosous, Qalyubiya to 32, North Qalyubiya Prosecution announced. North Qalyubiya Attorney General Hatem al-Zayyat said that according to the investigation, some of the suspects come from other areas outside Khosous. They came there to use the events in a way to further ignite sectarian strife. Zayyat said that the two children who started the events when they drew the Nazi symbol,  the swastika, next to their name on the walls of an al-Azhar institute, were released without facing any charges, after they said they didn’t mean any harm. A number of suspects in the sectarian clashes at Abbasiya Cathedral on Sunday 7 April have been arrested, according to an interior ministry security official source, with intensified efforts to arrest the rest of the suspects in the coming hours. The National Council for Human Rights, however, released a report holding the ministry of interior responsible for the violence in Khusus. The ministry released a video to the Shura Council to show that Christian protesters started the violence in Abbasiya. [Egypt Independent, Ahram Online, AMAY (Arabic), 4/11/2013]

Interior Ministry admits security failure in Rafah
A interior ministry official admitted there was a security failure in Rafah, North Sinai, in a Shura Council meeting Wednesday. Major General Abdel Raouf al-Seirafy, deputy of the public administration of criminal investigations at the public security sector, said the security situation in Rafah is not under control, and that tribesmen in Rafah are in charge of protecting police. He also said that security operations around smuggling tunnels were not ongoing, and consequently, there was no security services to confront the illegal movement of goods into and from the Gaza Street. [Egypt Independent, 4/10/2013]

Egypt arrests 4 jihadist suspects in Sinai; 55 undocumented migrants arrested, drugs seized on border with Libya
Egyptian authorities arrested four suspects belonging to an Islamist militant group in the Sinai Peninsula on Wednesday. “Rafah border guards arrested four persons, possessing an automatic rifle, a bomb, 60 ammunition bullets and two Dana shells. They are suspected to belong to a jihadist group in Sinai,” said a statement published on the official page of the armed forces. Additionally, border troops with the military’s southern command arrested 55 migrants attempting to cross into Egypt. The Ethiopian and Sudanese nationals were arrested while trying to cross the borders in the East Ouwaynat area, with the help of two Libyans. They had two land cruisers, without license plates, machine guns, ammunition and satellite communication devices. [Egypt Independent, Aswat Masriya, 4/10/2013]

Coptic Church submits demands to Morsi
The Coptic Orthodox Church has identified five demands for President Mohamed Morsi to resolve the sectarian crises that have erupted in various parts of the country. “We demand the president to apply the law to everyone, ensure safety and security in the entire country, activate fully the principle of citizenship, amend religious discourse, and teach Coptic history in schools,” Father Makary Habib, the personal secretary to Pope Tawadros II, told the Turkish Anadolu News on Wednesday. A statement released by presidential Foreign Affairs Advisor Essam Haddad held mourners leaving the Sunday funeral at the cathedral responsible for the violence, insisting the group inflamed the situation by vandalising cars and then people on their side fired guns. His statement also praised the work of the Ministry of Interior, saying it was committed to self-restraint. However, presidential spokesperson Ihab Fahmy on Wednesday said that Haddad’s statements on Facebook about the Coptic Cathedral incident was an account of events and did not accuse Christians of anything. A reconciliation meeting was held in Khusus, in the presence of religious leaders, in an attempt to ease tensions. [Egypt Independent, DNE, Shorouk (Arabic), Shorouk (Arabic), 4/10/2013]

Salafis protest against Shi’ism in Alexandria
Dozens of Salafis protested on Tuesday in the Al-Hadra district of Alexandria against the Shi’a doctrine. Protesters distributed flyers and brochures warning citizens of what they described as the dangers of Shi’ism. They also broadcast several videos illustrating what they perceived as fallacies of the Shi’a doctrine, according to state-owned Al-Ahram. Members of the Al-Da’wa Al-Salafia, Al-Nour Party, and the Al-Gabha Al-Salafia participated in the protest, and engaged in several discussions with passersby, criticising the Shi’a doctrine and the government’s position on Iran. They denounced the tourist visas recently introduced and then suspended for Iranian visitors to Egypt, according to Khaled El-Masry, a member of the Political Bureau of the Al-Gabha Al-Salafia. [DNE, 4/10/2013]

Mansoura University protesters arrested
Security forces arrested 24 protesters on Tuesday, following clashes that erupted after students were attacked by unknown assailants as they held a sit-in at the Mansoura University campus. The violence broke out during a protest calling for the dismissal of university president Al-Sayed Abdel Khaleq and for investigations into the death of Gehad Moussa, a student who was run over by a car on 2 April. Student members of the Salafist Raya Party, founded by Egypt’s disqualified presidential candidate Hazem Salah Abou-Ismail, issued a statement Wednesday accusing the president of Al-Mansoura University of hiring thugs to use against protests on campus. [DNE, Ahram Online, 4/10/2013]

Military official declares cooperation with Libya
Chief of Staff of the Egyptian Armed Forces Sidqi Sobhi said that the Libyan and Egyptian armed forces would cooperate in all fields at a press conference with his Libyan counterpart on Wednesday. Sobhi added that his visit to Libya “would not be the last and that it comes within organizing the work between the two armies.” Sobhi said that for the first time there would be decentralised communication between the Egyptian and Libyan armies. A signed agreement between both parties stated that cooperation would take place in the fields of training, while also tackling illegal immigration and drug trafficking. [Egypt Independent, Ahram Online, EGYNews (Arabic), 4/10/2013]

Egypt major recipient of illicit Libyan weapons: UN report
The United Nations published a report on Tuesday which concludes that weapons used during the Libyan civil war against Muammar Gaddafi are being funnelled at an alarming rate to other countries in the region. The report said these weapons have been found to be used in the recent war in Mali, the West Bank in Palestine and the ongoing Syrian civil war, with Egypt and the Sahel region receiving the most significant amounts. The report said these weapons are fuelling conflicts and increasing the arsenal of armed groups. [DNE, 4/10/2013]