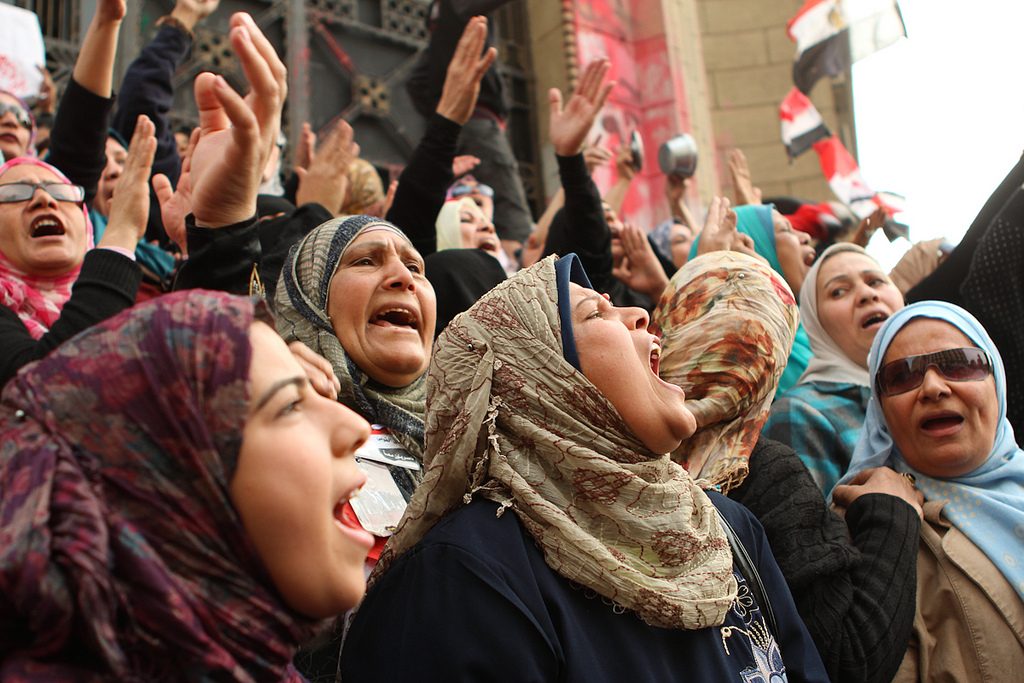 The US State Department says arrest warrants and the investigation of a popular Egyptian satirist and other critics of Islamist President Mohamed Morsi highlight a "disturbing trend" of growing restrictions on freedom of expression in Egypt.

Shura Council discusses amended electoral law
Vice president of the Freedom and Justice Party (FJP) Essam al-Erian has said that the Shura Council will begin discussing an amended law on the exercise of political rights and electoral rules which was passed by the council’s committees "in principle" last week. al-Erian, who is spokesperson for the council, said in a statement on his official Facebook page on Monday that council members submitted their suggestions to amend the law to the constitutional and legislative committee of the council. When finally approved by the Shura Council, the law should be sent to the High Constitutional Court (HCC) to rule on its constitutionality. The legislative council also submitted to the Nour party’s request to drop the requirement for women in the top half of party lists. [Ahram Online, Ahram (Arabic), AMAY (Arabic), 4/1/2013]

NSF restructure imminent
Media outlets circulated a report on the preliminary draft of the proposed National Salvation Front (NSF) restructuring document on Monday, prompting NSF spokesperson Khaled Dawoud to issue a statement asserting the draft is an early proposal and not the final document.  The senior leadership will be composed of 14 representatives from the political parties within the NSF and two interchangeable representatives from the youth groups within the parties. The senior leadership will be responsible for setting the policies and vision of the NSF, as well as the approval of activities and attendance at weekly meetings. Mohamed ElBaradei will occupy the position of General Coordinator in the senior leadership and Ahmed al-Borai will be the Secretary-General, with Wahid Abdel and Inas Mekkawi occupying positions of Assistant Secretary General. [DNE, 4/1/2013]

Morsi’s initiative for women discusses sexual harassment
Under the auspices of President Mohamed Morsi, the National Centre for Social and Criminal Research (NCSCR) held the first group discussion titled “Sexual harassment between law and social confrontation” on Monday. The centre specified six key issues that affect women in Egypt: sexual harassment, political, social and economic rights, the image of women in media and a suggestion to establish a national network of all NGOs working on women issues. The centre will use tools like discussion groups, surveys, interviews and field research to study these issues, noting that the centre is a scientific authority rather than an executive one. [DNE, 4/1/2013]

SLA denies appealing prosecutor general verdict
President Mohamed Morsi has not asked the State Litigation Authority (SLA) to appeal the court verdict overturning Prosecutor General Tala’at Abdallah’s appointment. SLA Assistant Secretary General Abdel Salam Mahmoud said on Monday that no presidency officials had requested an appeal and that no one had the right to appeal but the authority itself, which is an independent judicial body. “The verdict is still under review by the technical office of the State Litigation Authority. We will announce it ourselves when we come to a decision regarding whether or not to appeal,” Mahmoud said in a statement. Meanwhile, Former Prosecutor General Abdel Meguid Mahmoud requested Monday that the Cairo Court of Appeal hand over the reasoning behind its verdict invalidating the appointment of his successor, Talaat Abdallah, in preparation for his return to office. However, judicial sources said the court’s clerk declined to comply, and Mahmoud’s representative immediately submitted a complaint against this decision. [DNE, Egypt Independent, ِAsharq al-Awsat (Arabic), 4/1/2013]

Alexandria Lawyers Syndicate to abstain from defending police officers
Alexandria’s Lawyers Syndicate took a decision at its Monday meeting that its lawyers will not defend police officers in any court cases. The syndicate also decided to ban police officers from registering at the lawyers syndicate when pursuing their law degree, a practice commonly undertaken by police officers after they retire from police. The syndicate’s decisions come after several lawyers were assaulted by police officers at Alexandria’s Raml police station on Saturday, and arrested later when protesting the attack. The lawyers were at the station to follow up on cases against arrested protesters. The head of the Lawyers’ Syndicate Sameh Ashour demanded on Sunday the minister of interior, the Alexandria security director, the head of detectives and the deputy police chief be fired and legally prosecuted, in response to the incident at Raml police station. [Ahram Online, DNE, 4/1/2013]

Another report filed against satirist Bassem Youssef, Summons for stand-up comedian Ali Qandil
Public Prosecutor Talaat Abdullah referred a new report Monday to state security prosecution against satirist television host Bassem Youssef accusing him of inciting violence. A lawyer filed the complaint with the Public Prosecution accusing Youssef of inciting violence and reiterating phrases to call on citizens protest against the president and Muslim Brotherhood in Moqattam through his show "al-Bernameg" (The Program) aired on privately-owned satellite channel CBC. Stand-up comedian Ali Qandil has also been summoned to appear before the prosecutor general’s office on Wednesday morning on blasphemy charges. Qandil made a guest appearance in Bassem Youssef’s show ‘al-Bernameg’ and criticised some Muslim clerics’ approach to religious discourse and the use of religion by individuals to gain personal benefits. [Egypt Independent, DNE, Shorouk (Arabic), 4/1/2013]

Egypt aims for $16 bln reserves in June -minister
Egypt aims to boost its foreign currency reserves back to $16 billion by the end of June, the planning minister said on Tuesday. Meanwhile, Egypt’s central bank governor said on Tuesday that foreign exchange reserves had fallen slightly in March from February’s level of $13.5 billion. Governor Hisham Ramez told reporters in Dubai that the reserves were "down a little bit" from February. [Reuters, 4/2//2013]

IMF could change size of $4.8 bln Egypt loan, Egypt lifts cooking gas price before IMF visit
The International Monetary Fund could conceivably change the size of the $4.8 billion loan which it is negotiating with Egypt, depending on the country’s needs, a senior IMF official said on Tuesday. "The size may vary, it’s a question of needs and what’s required," Masood Ahmed, director of the IMF’s Middle East and Central Asia department, told reporters in response to a question. Meanwhile, Egypt raised the price of state-subsidised cooking gas for the first time in two decades on Monday, a government official said, trimming an unaffordable subsidy bill but increasing the risk of unrest. [Reuters, 4/1/2013]

Interior Ministry says it’s unable to end Tahrir sit-in
The Interior Ministry is unable to end a months-long a sit-in at Cairo’s Tahrir Square, fearing a negative media reaction, Assistant Minister for Cairo Security Ismail Ezz Eddin said.  “We are unable to remove tents in Tahrir Square, though we are sure those inside do not represent the revolution by any means,” Ezz Eddin said during a meeting with the Shura Council National Security Committee. He said the protesters in the square “every now and then” assault police vehicles and set them on fire, “thanks to media campaigns critical of the Interior Ministry and the support they gain from some political groups.” [Egypt Independent, 4/1/2013]

Second field army chief says Sinai residents allowed to own lands
Major General Ahmed Wasfy, second field army commander, said on Monday that citizens can own lands in Sinai without complications and that mobile networks will be operated within a few days. In December, Defense Minister Abdel Fattah al-Sisi banned the private ownership, rental and use of nearly all land on Egypt’s eastern border. [Egypt Independent, 4/1/2013]

Report: In March, Egypt had highest rate of protest worldwide; Poll: Most Egyptians oppose recent protests
In a March report titled “Democracy Indicator,” an Egyptian rights center said Egypt has one of the highest rates of protest, having witnessed 1,354 protests in March, up from 864 in February. According to the report issued by the International Development Center, Egypt has never seen such a high rate of protest before, not even at the peak of the 25 January revolution. In March, Egypt had 1.8 protests every hour, 7.2 protests every four hours, 44 protests a day and 306 protests a week. Meanwhile a recent poll says that most Egyptians do not support protests by anti-regime demonstrators outside the Muslim Brotherhood’s headquarters and demonstrations by Islamist protesters outside Media Production City. The Egyptian Center for Public Opinion Research (Baseera) has found that 74 percent objected to protests outside the Brotherhood’s Guidance Bureau in Moqattam earlier this month. [Egypt Independent, 4/1/2013]

Protests in Port Said over exclusions from victims’ funds
Port Said residents protested on Sunday against statements made by the head of the revolutionary victims’ fund Khaled Badawy, who said that those who died during the latest Port Said clashes are not on the fund’s list of victims of the revolution. More than 40 Port Said residents were killed during clashes with the police following a court verdict on the Port Said stadium massacre on 26 January. [DNE, 4/1/2013]

US blasts arrest warrant against Egypt satirist Bassem Youssef
The US State Department says arrest warrants and the investigation of a popular Egyptian satirist and other critics of Islamist President Mohamed Morsi highlight a "disturbing trend" of growing restrictions on freedom of expression in Egypt. The strongly worded statement by US State Department spokeswoman Victoria Nuland Monday came a day after Bassem Youssef, who criticizes Morsi and hard-line clerics on his Jon Stewart-style show, was released on bail following an interrogation into accusations he insulted the country’s leader and Islam. [AP/Ahram Online, Reuters, 4/1/2013]

Egypt, Iran at odds over tourism restrictions
Egypt and Iran are reportedly at odds over the Egyptian government’s attempts to regulate the places Iranian tourists can visit. Sources told the told the London-based al-Sharq al-Awsat newspaper that Tourism Minister Hesham Zaazou wants tourists to only be allowed to visit  ancient monument and the country’s coasts and beaches, while keeping them away from mosques, particularly those affiliated with Prophet Mohamed’s family. Iran, however, wants Iranian tourists to be allowed into sites throughout the country without restrictions. [Egypt Independent, 4/2/2013]