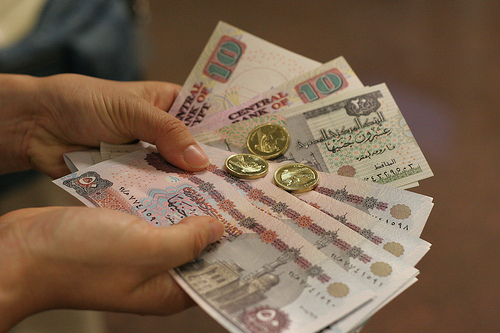 On June 19, the Egyptian Pound fell to a low of 7.03 to the US dollar at the official foreign exchange auction. The Central Bank of Egypt (CBE) sold $38.9 million at the auction but that did not prevent the rate from crossing the CBE’s implicit threshold level of EGP 7 against the US dollar. The rate actually crossed EGP 7 to the dollar at commercial banks in May and the black market rate reached EGP 7.6 to the dollar, but this was the first time since 2003 that the official rate sunk below 7.

Naturally, the breaching of the official threshold has set off speculation as to how low the rate could go, particularly in light of the likely political turmoil associated with the upcoming June 30 protests against President Mohamed Morsi and his government.

In the past six months, the Egyptian Pound has depreciated slowly but steadily, with the CBE using both intervention and interest rate policy to keep the currency from falling faster. As far as the CBE is concerned, currency stability remains the main target of monetary policy. Between January and May this year, the Egyptian Pound has depreciated by some 4.5 percent. However, since May the rate of depreciation has slowed down significantly as data came in showing improvements in the external balances.

The external current account deficit declined sharply in the period July-March of FY2012/13 to $3.8 billion compared to $7.1 billion in the first nine months of the previous fiscal year. This improvement was a result of increases in oil exports, remittances, and revenues from tourism. In the capital account, there were also positive signs with outflows slowing down and large official financing coming through with Libya depositing $2 billion in the CBE and Qatar buying an additional $3 billion of Egyptian treasury bills. As such, foreign exchange reserves at the CBE rose to $16 billion at the end of May, the second straight month this year that they have risen, and reaching the highest they have been since Morsi was elected.

At the same time, however, other fundamentals still point to further depreciation. Inflation is running near double-digits, well above the average rate of about 2 percent in Egypt’s main trading partners. Thus, looking forward the country will continue to lose international competitiveness if the rate of depreciation does not keep pace with inflation differentials.

Furthermore, interest rates on 3-months treasury bills in domestic currency are averaging nearly 14 percent, again significantly higher than foreign interest rates which are in the 1-2 percent range on government securities of the same maturity. Egypt is currently paying 4 percent on US dollar-denominated securities, and the difference between this rate and foreign interest rates reflects default risk, i.e., that the country would default on its debt. But the difference between what the Egyptian government securities pay locally and what it pays on its US dollar denominated securities represent currency risk, i.e., the risk of a fall in the value of the Egyptian Pound. It appears that the markets are pricing in a near-10 percent devaluation in holding Egyptian paper.

While fundamentals are important, exchange rates in the short-run are driven primarily by expectations and shocks. Thus, the possible effect of the June 30 protests is leading to nervousness in the markets and is already putting pressure on the spot rate. The pressure is more evident in the forward market where 1-month and 3-month forward rates have increased significantly since mid-May, indicating that market participants are worried about the future course of the Egyptian Pound and are covering themselves.

While one could question the CBE’s policy of maintaining currency stability even though other indicators would point to a more rapid and larger depreciation of the Egyptian Pound, the fact is that it has done a good job in fulfilling its objective.  However, it may have much greater difficulty in continuing with this policy if the June 30 protests lead to renewed clashes and possibly widespread strikes and civil disobedience. In these circumstances, it is almost assured that Egyptians will increase their demand for both Egyptian pounds and US dollars, and the Egyptian Pound will depreciate. The CBE does not have sufficient reserves to mount a defense against a large-scale run on the currency. The concern of the CBE is reflected in its instructions to commercial banks on June 18 to keep extra cash reserves on hand to meet any demands by the public in the run up to the June 30 demonstrations.

For now, all eyes should be on movements in the forward market and black market rates over the next few weeks as they will be key indicators of what would be the value of the Egyptian Pound. It is a virtual certainty that it would depreciate relative to its current value. What is not known is by how much.