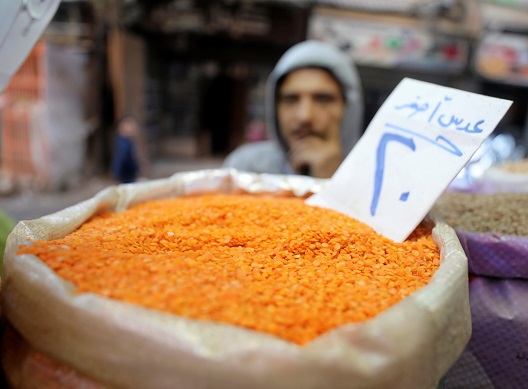 Over the past decade or so, Egypt has consistently experienced relatively high rates of inflation. But since the advent of the Arab Spring in 2011, the increase in consumer prices steadily accelerated. During 2011-2015, the average rate of inflation was close to ten percent a year, which was well above the corresponding rate of six to seven percent a year in the MENA region as a whole. Many factors are at play here in causing inflation to rise: increased oil prices worldwide, food price increases, growing fiscal deficit, and rapid increase in the money supply.

The picture changed dramatically in 2016-2017 with inflation moving to a new high. The twelve month inflation rate rose from ten percent in January 2016 to over thirty percent in April 2017. The proximate cause of this sharp increase was the exchange rate. During 2011-2015, the Egyptian pound depreciated by an average of seven percent a year despite serious political unrest and severe balance of payments pressures. In March 2016, the Central Bank of Egypt (CBE) devalued the pound by thirteen percent to EGP 8.85 per US dollar. This one time action led to an increase in inflation in April 2017 as the devaluation worked its way into consumer prices via the rise in import prices, the so-called exchange rate pass-through. Inflation continued then to increase for the next six months.

Despite the March devaluation, foreign exchange pressures during the second half of 2016 were becoming even more untenable and it became evident to most observers that maintaining the value of the pound was a mistake. Thus, on November 3, the government and the CBE floated the pound, thereby allowing market forces to determine its foreign currency value. The currency immediately fell to EGP 13.89 to the US dollar, and by November 8 had sunk to EGP 17.8 to the US dollar, or about half its value when it was devalued on March 3. Since then, the value of the pound has stabilized at around EGP 18 to the US dollar through May of this year.

There was an almost immediate jump in inflation following the adoption of the new floating exchange rate regime. By the end of 2016, the twelve month inflation rate had hit twenty-three percent, and continued its rise through the first four months of 2017, reaching a historical high of thirty-one percent in April. The International Monetary Fund and the World Bank are projecting that inflation will slow down in the coming months but will still amount to twenty to twenty-five percent for the year as whole. Putting it in regional context, Egyptian inflation is now the highest in MENA, exceeded only by Libya, which is essentially in the midst of a civil war.

The rapid rise of inflation following the floating of the pound took many by surprise for two main reasons. First, it was thought that the “pass-through” from exchange rates to inflation was relatively small as imports represent less than twenty percent of gross domestic product (GDP). Second, it was argued that inflation before the floating pound already reflected the value in the parallel market, which at that time had reached EGP 17 to the US dollar. So, on both accounts, no major increase in inflation was expected. In retrospect, it is clear that both these assumptions were false.

Continuing high inflation has well-known negative effects on the economy. It imposes welfare costs on society; impedes efficient resource allocation by obscuring the signaling role of relative price changes; inhibits financial development by making intermediation more costly; hits the poor disproportionality because they do not hold financial assets that can be a hedge against inflation; and reduces long-term economic growth. In the case of growth, studies have shown that double-digit inflation has serious negative consequences and that for MENA countries, policymakers should aim to keep inflation below six percent a year. So for many reasons, Egypt has to bring inflation down into single digits.

The CBE should therefore move to an explicit inflation targeting framework that both developed and developing countries such as Ghana, Chile, and Kenya have successfully implemented. In practice, this means choosing a target for inflation, and then conducting monetary policy through changes in interest rates to hit the target. Inflation as the primary goal of monetary policy does not mean ruling out the prevention of short-run volatility in the exchange rate, but ultimately the inflation target must take precedence. Other important government objectives, such as economic growth and job creation, should fall under the purview of other responsible government agencies. On balance, the inflation targeting monetary policy framework will have a number of advantages:

At the same time, it should be stressed that the new monetary policy framework will not be able to achieve the reduction in inflation by itself. The government will simultaneously have to control the budget deficit, which is creating excess demand pressures in the economy. Currently, the fiscal deficit in Egypt is averaging ten to twelve percent of GDP, which is much too high by any standard.

The combination of inflation targeting and concerted reduction in fiscal deficits should bring Egyptian inflation down to a more sustainable level. This should be done sooner rather than later. The longer the delay, the more difficult it will be to tackle inflation as it becomes embedded in the system. In this regard, the government plan “to bring down the rate of inflation to single digits over the medium-term” is not sufficiently ambitious. Faster reduction should be the goal.

Mohsin Khan is a nonresident senior fellow at the Rafik Hariri Center for the Middle East focusing on the economic dimensions of transition in the Middle East and North Africa.

Elissa Miller is an assistant director in the Atlantic Council’s Rafik Hariri Center for the Middle East.