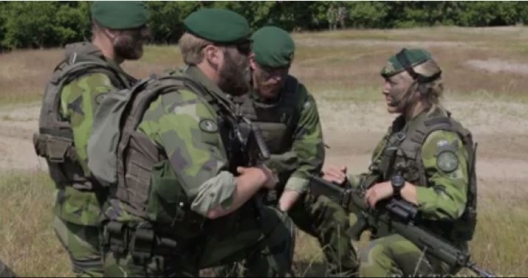 This image of a Russia encircled by hostile forces, including an aggressive and growing NATO and European Union, was created to legitimize the regime’s actions. The specter of an outside threat keeps domestic support high for a leadership that oppresses and eliminates political opposition and free media, renationalizes major Russian businesses and, by means of rampant corruption, reserves the profits of Russia’s raw material exports for a small and loyal elite. Russia is one of the most unequal societies in the world….

Conflict with the West simply serves a vital function for the current Russian leadership. Unfortunately, the EU, Sweden, and NATO as well may have to rebuild their capacity to handle a drawn-out confrontation. In the ongoing test of strength, that capacity will generate respect and have a restraining effect on Russia, whereas attempts to see the conflict from the point of view of the opposite side and to search for compromises will be interpreted as signs of weakness and only arouse a greater appetite for confrontation.

The same is true in the military sphere: only demonstrated military capability and increased defense spending and exercises, conducted jointly with NATO and NATO member countries, can have a restraining effect on Russian military pressure.

A NATO membership for Sweden would of course not relieve us of the need to invest more in defense. It would hardly increase the risk of attack, since in practice our country is already considered to be on NATO’s side in the case of a potential conflict. But a Swedish NATO membership would most probably trigger severe Russian criticism, as well as new threats and counter-reactions (and would therefore be a discomfort for Swedish politicians). Indeed, Swedish membership in NATO would mean a considerable political defeat for Russia’s strategy of dividing its neighbors (in order to keep them “independent”). Swedish membership would also substantially facilitate the aid promised by the alliance to the Baltic countries and Poland, thereby enhancing the credibility of NATO. And conversely, a Swedish “no” to the Host Nation Support agreement already approved by the government—something that has become a key demand by leading critics of a Swedish NATO membership—would be a serious setback for regional solidarity, and a major success for the Russian policy.

The principal Russian foreign policy objectives in Europe are to undermine NATO’s as well as the EU’s credibility, to divide and weaken member countries, and most importantly to create a breach between European and transatlantic members. A Swedish membership in NATO would render the commitments of the alliance in the Baltic region more credible, and therefore not only strengthen the security and stability of our immediate region, but also deal a significant setback to Russia’s global aspirations. It would therefore promote most of the objectives, including equal rights and equal dignity of all individuals, democracy, peace and stability, and respect for international law, which usually adorn Swedish foreign policy declarations, irrespective of their party color.

Tomas Bertelman and Johan Molander were Swedish Ambassadors to Moscow (2008–12 and 2004–08, respectively). Sven-Olof Peterson was Head of the Political Department at the Swedish Ministry for Foreign Affairs 2000–02 and Ambassador to the EU (2002–08). This article was originally published in the Dagens Nyheter on June 22 as part of a debate and translated by Bengt Eriksson.