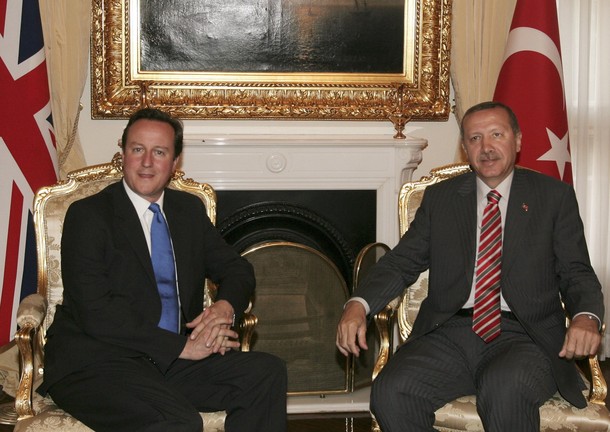 From Alex Barker and Delphine Strauss, the Financial Times:  David Cameron will express his “anger” on Tuesday at Turkey’s European Union membership bid being “frustrated” by the bloc’s leaders, as he heaps praise on an emerging power increasingly at odds with Britain, the US and Europe on the world stage.

The UK prime minister will spare no flattery on his first visit to Ankara, as he commits to “fight” for Turkey’s place at the European top table in a speech that largely glosses over differences between the two countries on Iran and Gaza. …

Mr Cameron’s comments also put Europe on notice with a thinly veiled attack on French and German resistance to Turkey’s full membership, underlining his determination to expand the EU to the borders of Syria and Iran.

“When I think about what Turkey has done to defend Europe as a Nato ally … it makes me angry that your progress towards EU membership can be frustrated in the way it has been,” Mr Cameron will say to an audience of business leaders. “My view is clear. I believe it’s just wrong to say Turkey can guard the camp but not be allowed to sit inside the tent.”

One provocative passage will even compare the French obstructionism to General Charles de Gaulle’s veto of British accession to the EU. “We know what it is like to be shut out of the club,” he is expected to say.

The words of support are part of a concerted British charm offensive in some of the world’s rising economic powers, as Mr Cameron puts commerce at the top of diplomatic priorities. …

Confronting those who stress the EU’s Christian roots, Mr Cameron will say the bloc is a “secular organisation” that must welcome “people of all faiths, or none”.  (photo: Reuters)