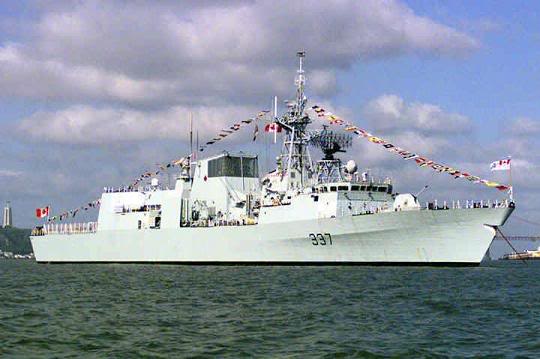 From Colin Robertson, the Ottowa Citizen:  Vancouver is the busiest port in Canada and we are making improvements to this vital gateway as well as to Prince Rupert. Regardless of oilsands pipeline proposals, shipping in and out of our West Coast ports is going to increase.

It is estimated that 90 per cent of international commerce moves by sea. We look to our Forces, especially the Royal Canadian Navy, to secure the safe passage of our sealanes and to contribute to collective security on the high seas. . . .

This is the strategic reality Prime Minister Stephen Harper recognized in his May speech when he said that, “Canada and its economy float on salt water.”

That is why the government has committed to cutting steel on a new generation of warships with the announcement in June of the National Shipbuilding Procurement Strategy (NSPS). It would be the largest military procurement in modern Canadian history.

Our national motto, From Sea to Sea, celebrates our oceans and our coastline — the longest in the world, enough to circle the equator six times.

But for too long we have done defence, especially of our waters, on the cheap. We spend about 1.4 per cent of GDP: well behind the United States (4.7 per cent), the United Kingdom (2.6 per cent) and even Australia (1.7 per cent). In terms of usable naval power we are situated in the bottom half of the second 10.

The Canada First Defence Strategy aims to redress this and earmarking the dollars through the NSPS should re-establish our shipbuilding capacity and bolster our naval power into the mid-century.

A former diplomat, Colin Robertson is vice-president of the Canadian Defence and Foreign Affairs Institute and an Honorary Captain (RCN).  (photo: militaryphotos.net)  (via Real Clear World)