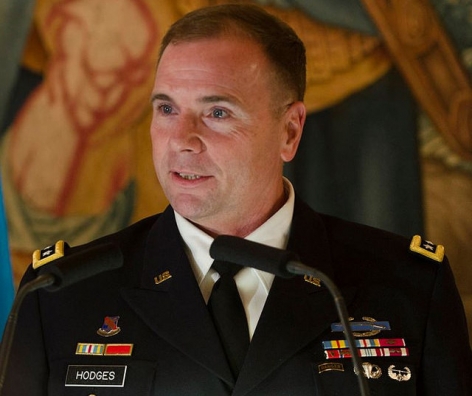 “Strong Europe!” reads a sign on one of the walls. Next to it is the U.S. Army Europe insignia, a burning sword set against a blue shield. The two signs represent the strategic framework the three-star general has introduced—building on America’s decades-long role on the Continent—since taking command last year of the 30,000 or so U.S. soldiers stationed in Europe.

The U.S. military presence in Europe is more vital at this moment than it has been in many years. American engagement is essential if the West is to deter a revanchist Russia that has set out to “redraw the boundaries of Europe,” Gen. Hodges says with a native Floridian’s drawl….

The Russians have “got some forces in Transnistria,” he says of the state that broke away from Moldova in the 1990s. “They’ve got forces in Georgia. And I think they view China as their existential threat, so they’ve got a lot of capacity out there.” The Russian military is thus already somewhat stretched, and Moscow had to carve out from existing units the battalion task groups currently arrayed near eastern Ukraine. Yet “they are clearly on a path to develop, to increase, their capacity,” Gen. Hodges says. Add to this expansion that “they’ve got very good equipment, extremely good communications equipment, their [electronic-warfare] capability, T-80 tanks.” How long will it take for Russia to reach its desired military strength? “I think within another two or three years they will have that capacity,” he says….

Then there is the Kremlin’s sheer aggressiveness, not least on the nuclear front. The Pentagon last year announced that it is removing missiles from 50 of America’s underground silos, converting B-52 long-range bombers to conventional use and disabling 56 submarine-based nuclear-launch tubes—all well ahead of the 2018 New Start treaty deadline. Moscow, by contrast, has been simulating nuclear strikes on Western capitals as part of annual exercises.

Gen. Hodges won’t comment on the U.S. strategic-force posture in Europe other than to say he is “confident in that process.” But he adds that the fact that the Russians rehearse nuclear-strike scenarios “shows that they’re not worried about conveying a stark message like that. You know, frankly, you hear this often from many people in the West, ‘Oh, we don’t want to provoke the Russians.’ I think concern about provoking the Russians is probably misplaced. You can’t provoke them. They’re already on a path to do what they want to do….

“I’ve never been bashful about telling allies, ‘Hey, you have a responsibility here, too. You all agreed to spend 2% of your GDP on defense. Right now only four countries are doing it.'”

Yet the failure of many of European leaders to live up to their defense commitments “doesn’t change our interest,” Gen. Hodges says. “And the U.S. economic link to Europe, to the EU, dwarfs any other economic link in the world, anywhere in the Pacific, China, India, you name it. So if for no other reason it’s in our interest that Europe be stable, that people make money so they can buy U.S. products. . . .

We provide capability assurance here by being present here.”

Gen. Hodges says there is also a huge payoff in U.S. security from U.S.-European cooperation. The main lesson of the post-9/11 wars is that “we are not going to do anything by ourselves militarily,” he notes. The U.S. “needs the capacity that other countries can bring.” These benefits come “from a relatively small investment—I mean, U.S. Army Europe is 2% of the Army’s budget and about 5% of the Army’s manpower. . . . You can’t sit back in Virginia, Texas or Oregon and build relationships with people here.” He quotes his predecessor, Lt. Gen. Donald Campbell: “You can’t surge trust.”

Nor can the U.S. project national power world-wide, as it has since the end of World War II, with an overstretched Army. “There are 10 division headquarters in the Army,” he says. “Nine of them are committed right now. I’ve never seen that. I don’t think at the height of Iraq and Afghanistan you had nine out of 10 division headquarters committed against some requirement.” That leaves little in reserve if another conflict breaks out.