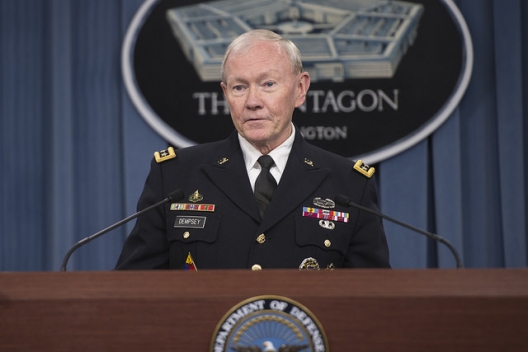 Q. Talk a little about how you see Russia….

A. When I give my advice to our elected officials, I talk in terms of threat, what could threaten our interests. Threat is the combination of capability and intent. That is the doctrinal definition. I can’t tell you, as we sit here today, precisely what [Russian President Vladimir] Putin and Russia intend to do. They have demonstrated some behaviors outside the international order that clearly indicate that they are willing to push beyond what most of the nations with whom we deal consider to be international norms.

I can tell you on the capabilities side, they have developed some capabilities that do threaten security in Europe. I will just tick off a few of them:

Surrogates. They have demonstrated an ability to use surrogates.

They have demonstrated the ability to use instruments other than their military. They are very adept in the media space of propaganda, leading to subversion.

They have developed the capability to use their special forces to train, advise and in many cases assist the surrogate networks.

They have demonstrated the ability to conduct snap exercises with conventional forces that can coerce or at least threaten borders.

They have demonstrated some capabilities with long-range aviation and with their nuclear forces that are clearly intended to signal the nations in Europe and us of their willingness to consider all the instruments of military power. I could go on and on….

Q. If Putin is looking for wedge issues, how does the alliance maintain unity?

A. On certain issues, President Putin has stated his intent. One of his clear statements is he considers NATO as a threat to him and will look for opportunities to discredit and eventually undermine the alliance. He has been very open about that. What we do is ensure alliance solidarity in our decision making….