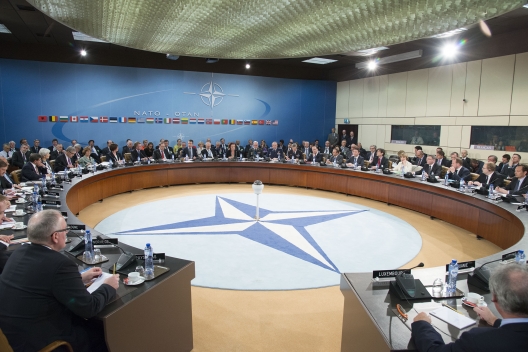 Nato has drawn up plans to strengthen military co-operation with the former Soviet states on Russia’s southern flank after the Kremlin’s seizure of Ukraine’s Black Sea peninsula of Crimea.

Nato foreign ministers were meeting in Brussels on Tuesday to discuss the alliance’s response to the Ukraine crisis amid continued fears of Russia’s territorial ambitions and what the Americans term a “tremendous” buildup of Russian forces on Ukraine’s eastern border.

Before the meeting, a Nato committee drafted plans “for promoting stability in eastern Europe in the current context” by increasing military co-operation with Armenia, Azerbaijan, and Moldova – all in Russia’s “near abroad” and considered by Moscow as falling within its sphere of influence.

A confidential seven-page paper leaked to the German news weekly Der Spiegel proposed joint exercises and training between Nato and the three countries, increasing the “interoperability” of their militaries with Nato, and their participation in Nato “smart defence” operations.

The paper also proposed opening a Nato liaison office in Moldova, military training for Armenia, and projects in Azerbaijan aimed at securing its Caspian Sea oil and gas fields.