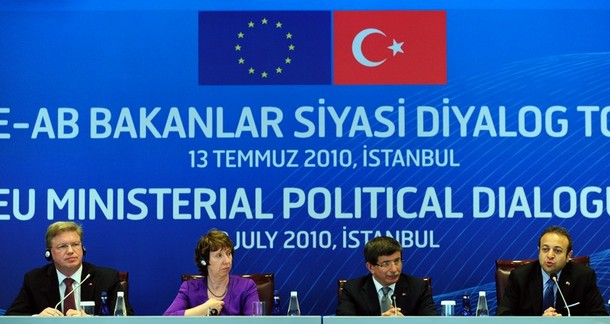 From AFP:  EU officials assured Turkey Tuesday over its troubled bid to join the bloc and praised the country’s growing regional role after claims the lagging progress was pushing Ankara away from the West.

"Trust and friendship are the marks of the relationship between Turkey and the EU. We both have the same goals" for peace and prosperity, Ashton told a joint press conference after the talks. …

Fule underlined that the 27-nation bloc had a "clear mandate" on Turkey’s membership bid and called for ways to accelerate the negotiations.

"We have to find ways to gear up the admission process," he said.

Last month, talks began on a new policy area, food safety, bringing the total number of chapters Turkey has managed to open to 13 out of 35.

Eight chapters remain frozen as a sanction for Turkey’s refusal to open its sea and air ports to Cyprus, an EU member that Ankara does not recognise owing to the island’s 36-year division between its Greek and Turkish communities.  (photo: Getty)