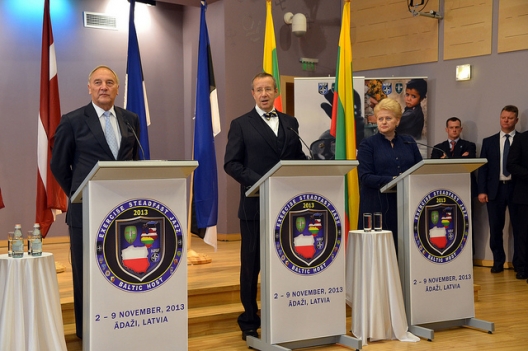 [N]ow there are new concerns – verging from mere worries to outright fears of a new generation of abandonment by the West provoked by Russia’s land-grab in Ukraine and the Western weakness it has exposed. The old assumptions of NATO and EU solidarity, in the eyes of the countries most at risk, are being tested as never before. Some are privately wondering about new regional security relationships and arrangements to deal with the Russian threat. The existing Nordic defense cooperation, Nordefco, is gaining weight; it includes Sweden and Finland which are not NATO members. The Baltic states and Poland are eyeing it closely, and it also enjoys American and British backing. Russia by contrast regards this with deep disfavor. A recent commentary published by RIA Novosti, an official Kremlin news agency, said that NATO’s ties with Sweden and Finland were part of a planned “Western military blockade of the entire western frontier of Russia.”

The new regional arrangements are controversial inside NATO, because they imply a failure of the existing system. Turkey objects fiercely to any NATO involvement with countries outside the alliance, fearing that it would set a precedent for NATO cooperation with Israel. That has jinxed experiments such as trying to get Swedish and Finnish warplanes involved in policing the airspace of Iceland, a defenseless NATO member. Any new arrangements are best sold as a complement to NATO — but in the background, the countries involved appear to realize that they may have to be a supplement, or in the worst case even a substitute.

The countries of the region between the Baltic Sea and the Black Sea have never been sanguine about Russia. Even during the Yeltsin era in the 1990s, when the Kremlin was ostensibly a friend and partner for the United States and Western Europe, these countries fretted. They worried about Russia’s use of gas and oil pipelines to create patronage and apply pressure. They noted the subtle and sometimes not-so-subtle tricks of Russian diplomacy. They noticed that Russian spies were numerous, active and all too effective. . . .

The conventional wisdom crystalized around the idea that Russia was not and would not be a threat. Anyone who thought differently in officialdom, especially in the foreign-policy, security, intelligence and military worlds, was wise to keep silent. Even as Russia became steadily more authoritarian and hostile, the West doubled down on its Russia policy. Even as Vladimir Putin adopted a more confrontational stance, NATO and the EU insisted that all was well and the answer to Russian snarls and sneers was yet more dialogue and integration, not confrontation or deterrence.

Edward Lucas is the author of The New Cold War (Palgrave-Macmillan, 2008).