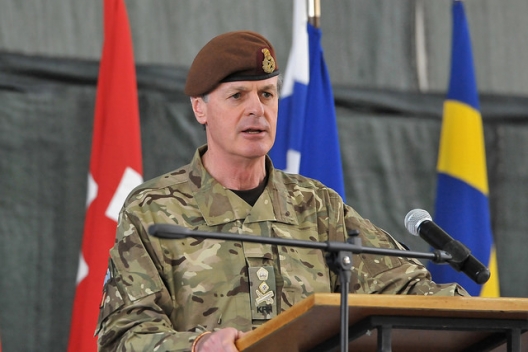 [O]ne of Britain’s most senior generals said that British troops should be permanently stationed in the Baltic States as part of a Nato task force to deter an invasion by Russia.

He told MPs that the only way to “absolutely guarantee” that countries like Latvia, Lithuania and Estonia are protected from Russia is to “have troops in place“.

He said: “There is a Russian aviation base within 45 minutes flying time of Riga. Unless Nato has stationed forces within the Baltics I think it’s highly unlikely that Nato could respond to a sudden attack.

“The only way you can absolutely guarantee deterring is if you’ve have troops in place. That means some form of permanent basing.”

However Philip Hammond rejected the suggestion, arguing that Russia does not pose an “existential” threat to Britain.

He later told the Defence select committee: “It’s not the government’s view and it’s not Nato’s view. He [Shirreff] is a retiring general. He can speak for himself but he does not speak for the department.”