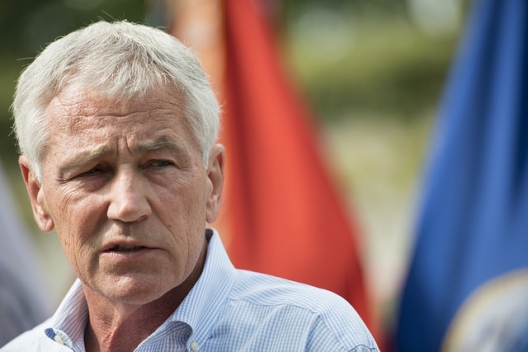 Speaking to reporters at U.S. European Command in Stuttgart, Germany, Hagel said he agrees with Poland’s foreign minister, who said Wednesday that the increase in Russian forces near Ukraine’s border heightened the risk of an invasion.

“I think it’s a reality, of course it is,” said Hagel, who was in Stuttgart for meetings with his military leaders in Europe, including the top commander, Air Force Gen. Philip Breedlove. “When you see the build-up of Russian troops and the sophistication of those troops, the training of those troops, the heavy military equipment that’s being put along that border, of course it’s a reality, it’s a threat, it’s a possibility – absolutely,” Hagel said. . . .

“The longer that Russia perpetuates and instigates this tension and the possibility of escalating their activity, it’s going to get worse. And we have to be prepared for that,” Hagel said.

Among the scenarios that worry some in NATO is Putin potentially sending Russian troops into eastern Ukraine in the guise of a “peacekeeping” force. That concern has deepened as the Russian-supported separatists appear to lose the initiative against Ukrainian government forces.