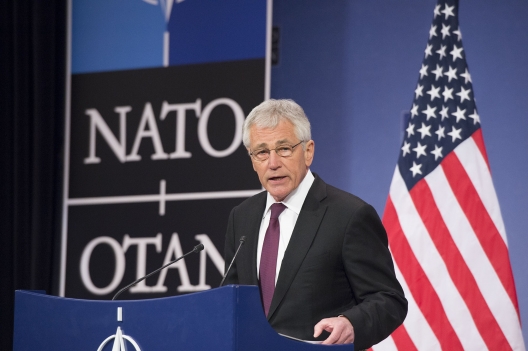 America did not make commitments abroad “in search of monsters to destroy.” Instead, President Truman joined the North Atlantic Treaty because he said he was convinced that NATO would serve as “a shield against aggression and the fear of aggression” and thereby let us get on with the “real business of government and society” at home. Truman joined the North Atlantic Treaty, because it was, as he put it, “a simple document” that, “if it had existed in 1914 and in 1939 would have prevented…two world wars.”

America was committed to NATO because NATO would help protect vital American interests by reinforcing the unity of transatlantic security. NATO would ultimately protect security and prosperity here at home…a truth that I believe endures to this day.

On the centennial of the start of World War I, and weeks before the 70th anniversary of allied landings at Normandy, Russia’s recent action in Ukraine has reminded NATO of its founding purpose. It has presented a clarifying moment for the transatlantic alliance.

NATO members must demonstrate that they are as committed to this alliance as its founding members were who built it 65 years ago. They must reaffirm the security guarantees at the heart of the alliance. They must reinvigorate the unrivaled joint planning, exercises, and capabilities that are its lifeblood. And they must reaffirm, that from the Mediterranean to the Baltics, Allies are Allies. Our commitment to the security of every Ally is resolute. . . .

Russia’s actions in Ukraine have made NATO’s value abundantly clear, and I know from my frequent conversations with NATO defense ministers that they do not need any convincing on this point. Talking amongst ourselves is no longer good enough. Having participated in the NATO defense ministerials over the last year-and- a-half and having met with all of my NATO counterparts, I’ve come away recognizing that the challenge is building support — the real challenge, real challenge is building support for defense investment across our governments, not just in our defense ministries. Defense investment must be discussed in the broader context of member nations’ overall fiscal challenges and priorities. Today, I am therefore calling for the inclusion of finance ministers or senior budget officials at a NATO ministerial focused on defense investment. This would allow them to receive detailed briefings from alliance military leaders on the challenges we all face. Leaders across our governments must understand that the consequences of current trends in reduced defense spending and help will break up the fiscal impasse.

In meeting its global security commitments, the United States must have strong, committed, and capable allies. This year’s Quadrennial Defense Review makes this very clear. Going forward, the Department of Defense will not only seek, but increasingly rely on closer integration and collaboration with our allies—and in ways that will influence U.S. strategic planning and future investments. . . .

In the short term, the transatlantic alliance has responded to Russian actions with continued resolve. But over the long term, we should expect Russia to test our alliance’s purpose, stamina, and commitment. Future generations will note whether at this moment – at this moment of challenge – we summoned the will to invest in our alliance. We must not squander this opportunity or shrink from this challenge. We will be judged harshly by history and by future generations if we do. . . .

NATO enlargement did not – did not invite Russian aggression. Instead, it affirmed the independence and democratic identity of new members. It did not foment crisis then or now. Instead, it settled old disputes and advanced regional stability. It promoted freedom and free markets, and it advanced the cause of peace. That is why NATO still holds the door open for aspiring members and why it must maintain partnerships with nations around the world. . . .

[I]n his first formal address as President, Ike insisted that America had to remain engaged in the world. He said “No nation’s security and well-being can be lastingly achieved in isolation, but only in effective cooperation with fellow nations.” And in 1957, President Eisenhower returned to Paris, where – in his address to the first NATO summit of heads of state – he connected America’s transatlantic commitments to the “vitality of our factories and mills and shipping, of our trading centers, our farms, our little businesses,” and to our rights at home, our rights to “produce freely, trade freely, travel freely, think freely, and pray freely.”

Those who doubt the value of America’s commitments abroad should recall that wisdom…because the unprecedented peace and prosperity we enjoy today was hard-won, and we must remember – it is always perishable. As Ike liked to say, “It takes a lot of hard work and sacrifice by a lot of people to bring about the inevitable.”

Excerpts from remarks by Secretary of Defense Chuck Hagel at the Woodrow Wilson International Center for Scholars, May 02, 2014.