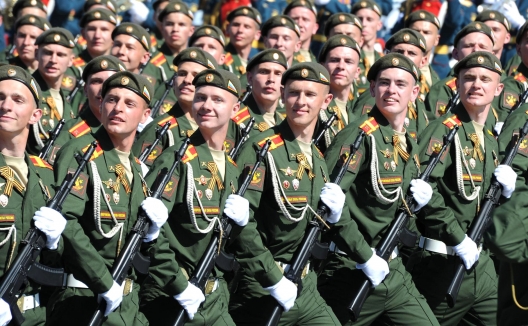 Military parade in Moscow, May 9, 2016 (photo: Office of the President of Russia)

At the core of Sweden’s security policy is military non-alignment, the essence of which is that Sweden does not extend mutual defence obligations to other countries….

The Defence Commission stated that Russian aggression against Ukraine in 2014 represents the greatest challenge to the European security order since the end of the Cold War. Russia has demonstrated its readiness to violate established norms of international law.

The assessments of the Defence Commission and the Government have consistently been confirmed during the course of the Inquiry. Russia’s actions have fundamentally weakened the cooperative European security order that emerged after the Cold War. Russia has developed an antagonistic posture towards the West. There is reason to believe that Russia seeks a security system which allows the country to maintain specific spheres of interest along its borders….

The line of confrontation between Russia and NATO has shifted to the Baltic Sea region….

The first is that the only state in Sweden’s neighbourhood that, in the foreseeable future, could conceivably engage in military aggression against its neighbours is Russia.

The second is that an isolated Russian attack against Sweden must be considered excluded for all practical purposes.

The third – and key – observation is that in all likelihood, Sweden would be drawn into a Russian-Baltic military conflict at an early stage through what might be called ‘consequential aggression’. The reasons are of a political, humanitarian and military-geographical nature. A serious crisis in the Baltic Sea region would engage both the EU and NATO. On its own, Sweden would find it difficult to organise the reception of the refugee flows that would probably be the result of an attack against the Baltic countries. In addition, access to Swedish territory would be of military operational importance to both the attacking and the defending parties in a given conflict.

The fourth observation is that a Russian military attack against one or more of the Baltic States is improbable….

The Inquiry depicts the most common assumption as to what form a military chain of events in the Baltic Sea region would take. In such a situation, Russia is considered to have the capacity to establish military control over the Baltic region within a few days.…

It is likely that NATO’s response in the event of a Russian attack would be an operation to recover the area.

All indications are that both the US and the Baltic States would request that US and NATO forces be able to use Swedish territory at an early stage of the conflict….

The conclusion is that Sweden, like other European countries, would be dependent on outside support to maintain its sovereignty in an evolving military crisis….

The EU retains its position as Sweden’s most important foreign and security policy platform. Brussels is the venue where Sweden most effectively can contribute to European diplomacy. The voice of Sweden is enhanced by active participation in the EU’s common security and defence policy, primarily its military and civilian crisis management operations, which provide an operational base and credibility to the Union’s common foreign and security policy.

Earlier ambitions among some of the Member States that, over time, the EU would take over NATO’s role in Europe have gradually been abandoned. However, it cannot be excluded that “Brexit” might revive this debate.

The invocation of Article 42.7 of the Treaty of European Union following the attacks in Paris in 2015 was a reminder that EU solidarity has a concrete security and defence dimension, even if its institutional expressiondiffers from NATO’s.

The EU’s operational focus is currently on civilian and military advisory and capacity building missions, primarily in Africa.

These missions underpin the global role that the EU long has strived for, but has had difficulties to realise. At the same time, there is growing frustration among some of the Member States that the Union has not yet been able to make full use of its potential in the foreign and security policy arena.

The Inquiry illustrates possible consequences of a Swedish NATO membership.

NATO membership is not likely to have a major impact on national defence expenditures….

Russia opposes Swedish membership in the Alliance. The most important military reason is probably that it would complicate Russian military operational planning and limit the country’s opportunities to take military action in the Baltic Sea region….

A Swedish membership application would likely lead to a political crisis with Russia, although its scope and duration is difficult to determine. Previous rounds of enlargement suggest that Russia, after initial opposition, accepts the fact of the matter and that the situation returns to status quo ante.

Russia’s military response would probably involve adjusting to any build-up of military capability that may occur on Swedish territory – should such a build – up at all take place – in order to re-establish a perceived balance.

Excerpts from unofficial government translation of Report by the Inquiry on Sweden’s International Defence and Security Cooperation.