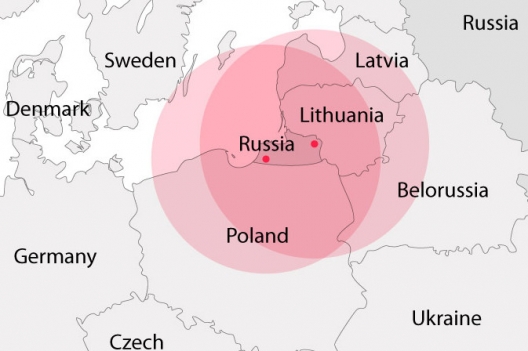 The head of U.S. Army Europe is eyeing a narrow sliver of land connecting Poland with Lithuania, concerned about the Russian troops and equipment he has been watching pile up on either side.

Dubbed the “Suwalki Gap” after the Polish town of Suwalki that sits in the seam between the Russian enclave of Kaliningrad to the northwest and Moscow-friendly nation of Belarus to the southeast, the area has become the latest potential flashpoint between an increasingly aggressive Moscow and NATO.

The port city of Kaliningrad has long bristled with thousands of Russian troops and advanced weapons, while Belarus recently agreed to house a large Russian air base, making the Suwalki area a small vulnerable land bridge increasingly squeezed by Russian hardware.

“If the Russians did a snap exercise [near the gap] you could see, potentially, they could close that off,” U.S. Army Europe commander Lt. Gen. Ben Hodges told Foreign Policy.

The geography of conflict matters these days, with an increasingly assertive Russia making land grabs in Ukraine and on the Black Sea, making menacing overflights of the Baltic Sea, and rapidly building up its military capabilities in the Arctic. For Western military planners, ensuring access to the three Baltic states inside NATO is fundamental to any forward response to Russian aggression….

The area is “one of the most militarized regions in all Europe,” said Jorge Benitez, senior fellow for transatlantic security at the Atlantic Council. “And by that I don’t mean NATO has invested in it. It’s Russia….”

“Anti-access/area denial, or A2/AD, is a growing problem,” Gen. Philip Breedlove, supreme allied commander Europe and commander of U.S. European Command, told an audience in Washington on Monday. Kaliningrad has given Moscow the ability to better defend the Baltic, while the annexation of Crimea has done the same on the Black Sea, he said.

“The Russians have chosen to make this the new zone of friction, that’s where you’re seeing the air provocations,” such as Russian warplanes flying with transponders off, said Benitez.