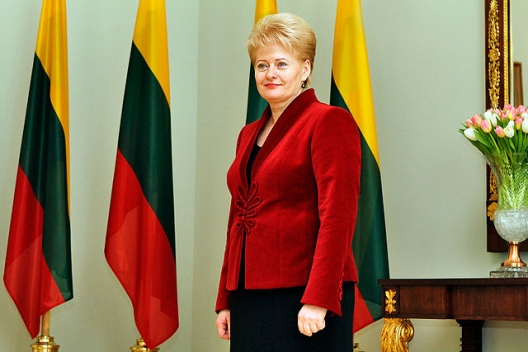 Excerpts from interview of Lithuanian President Dalia Grybauskaite by Lally Weymouth of the Washington Post.

How do you see the situation in Ukraine?

In Ukraine, it is a real war. The European Union and most of the leaders in the world are trying to talk about it as if it is not war but some kind of support of terrorist elements. We saw Crimea. In the very beginning, it was green men, and it became Russian military. Now it is the same in eastern Ukraine. And I’m sure that it is not the last territory where Putin is going to demonstrate his powers. . . .

Where do you think he is going now?

If we will be too soft with our sanctions or adapt sanctions but not implement them, I think he will go further trying to unite east Ukraine with south Ukraine and Crimea. He recently said that in two days he is capable to reach Warsaw, the Baltic states and Bucharest. So that is an open threat to his neighbors.

If we will allow him to go, he will go anywhere. The problem is that Putin’s Russia today is ready and willing to go to war. Europe and the West are not ready and not willing to go to war. There is no leadership in Europe or in the world able to stop Putin. Afterwards, we will be surprised that new territories are taken, that new countries are partitioned, and it will be a lot more costly and too late maybe to solve it.

Are you worried he will next attack the Baltics?

If he will not be stopped in Ukraine, he will go further.

So Article 5 and NATO are not enough?

No. Everybody declares that NATO’s Article 5 will take place. But it will not stop Putin from his plans if he does not see real actions from the European and world leaders. . . .

Do you feel you have enough protection after the Wales summit?

After Wales, NATO is revived, not sleeping any more. We have something to improve our security. We need to invest more. But how much time do we have?

So the sanctions are not hurting Putin?

They are not sufficient. But if he will go further, maybe countries will apply more serious sanctions.

The head of Ukrainian intelligence told a U.S. official that they had to agree to the cease-fire.

Yes. The Europeans and other countries asked [Ukrainian President Petro] Poroshenko to agree to conditions that were unacceptable because [they amounted to a partition] of Ukrainian territory. . . .

You worry about your own country.

All neighboring countries to Russia are under threat now. He is threatening them and joking that they are not real states.

Will the result be a war?

We can avoid a war. If both sides are ready to go to war, there will never be a war. If Russia is willing to go to war and the West avoids it, Russia will go as far as it will. . . .