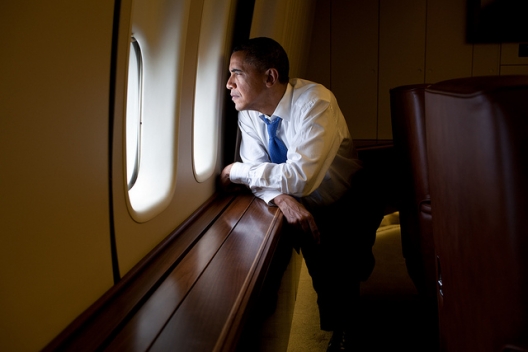 Foreign policy, once a relative strength for President Obama, has become a target of substantial criticism. By a 56% to 34% margin more disapprove than approve of his handling of foreign policy. The public also disapproves of his handling of Syria, Iran, China and Afghanistan by wide margins. On terrorism, however, more approve than disapprove of Obama’s job performance (by 51% to 44%). . . .

About half of Americans (51%) say that Obama is not tough enough in his approach to foreign policy and national security issues; 37% say his approach is about right while 5% say he is too tough. The share saying Obama is not tough enough has risen 10 points since September (from 41%), though it is only slightly higher than the percentage describing him this way in April 2010 (47%). . . .

Nearly eight-in-ten Americans (77%) agree that “in deciding on its foreign policies, the U.S. should take into account the views of its major allies,” virtually unchanged from 79% in 2011 and 78% in 2009. And most (56%) disagree that “since the U.S. is the most powerful nation in the world, we should go our own way in international matters,” although more agree with the statement now (38%) than at any time in nearly half a century, with the exception of 2009, when 44% agreed that the U.S. should go its own way internationally. . . .

More than half of the public (56%) say U.S. policies should try to keep it so America is the only military superpower, while 32% say it would be acceptable if China, another country or the European Union became as militarily powerful as the United States. This view is virtually unchanged from 2009. . . .

The long-range foreign policy priorities of the American public have remained largely consistent since the 1990s – a period covering three presidencies, two major wars and the worst terrorist attack in the nation’s history.

Fully 83% say that taking measures to protect against terrorist attacks should be a top priority of the United States. This is little changed from the most recent America’s Place in the World surveys in 2009 (85% top priority) and 2005 (86%).

Even in September 2001, before the 9/11 terrorist attacks, 80% rated protecting the nation from terrorism as top priority.

Protecting American jobs also continues to be one of the public’s leading policy goals. Currently, 81% rate protecting U.S. jobs as a top priority, which has remained stable since the 1990s. Nearly three-quarters of Americans (73%) say that preventing the spread of weapons of mass destruction should be a top long-range policy objective. . . .

In contrast, only about a third view China (33%) and Russia (32%) favorably and just 27% have a favorable view of Saudi Arabia.

Opinions about most of the 12 countries included in the survey have not changed a great deal in recent years. Favorable ratings for France, Germany and Canada are much higher than they were a decade ago, amid tensions over the U.S. war in Iraq. Currently, 59% view France favorably, which is little changed from a 2009 Pew Global Attitudes Project survey (62%). In 2003, just 29% viewed France favorably.

Over the past few years, unfavorable opinions of both Russia and Mexico also have risen substantially. Currently, 39% view Mexico favorably while 52% have an unfavorable opinion; in 2007, the balance of opinion toward Mexico was positive (47% favorable, 37% unfavorable). A majority of Americans (54%) view Russia unfavorably, up from 43% last year and 35% in 2007. . . .

Obama’s handling of Syria stands out as the worst aspect of his foreign policy in the view of CFR members; 29% cite this as the worst thing. Others mention the president’s general indecision and lack of action (16%), lack of clear foreign policy goals (12%), his handling of the Middle East and the Arab Spring (12%) and failure to work with allies (12%).