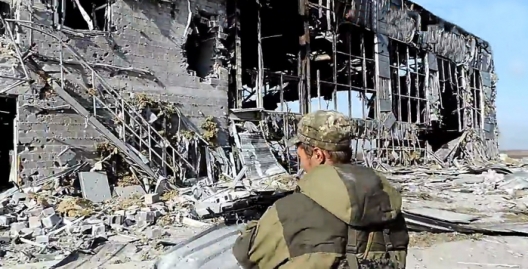 It’s not hard to guess what Mr. Putin has in mind. As it stands, the Donetsk-Luhansk ministates are not easily sustained; they lack a port, power supplies and access to the region’s principal airport. Alexander Zakharchenko, declared the winner in the “Donetsk People’s Republic,” is on record as saying his regime intends to capture the Ukrainian-held port of Mariupol as well as several large towns retaken by government forces last summer. In violation of the cease-fire, Russian-led forces already have been fighting to capture the Donetsk ­airport. . . .

If the Obama administration and its European Union allies have a plan to prevent Mr. Putin from completing this coup, it isn’t evident. The Kremlin has shrugged off Western sanctions while compensating Mr. Putin’s cronies for their losses. U.S. and German spokesmen denounced the weekend elections, and Berlin vaguely threatened further sanctions. But both governments have refused Ukraine’s increasingly desperate requests for military assistance, including defensive weapons, that might deter a new Russian offensive.

On Monday Vice President Biden went out of his way to correct himself after saying that Russia had “invaded” Ukraine; the White House still bans that term, as if lexicological make-believe will somehow erase the thousands of Russian troops stationed inside Ukraine. More worrying is the administration’s make-believe about its policy, which officials actually seem to believe has been a success. Mr. Biden said of the crisis: “We’ve put it under control.”