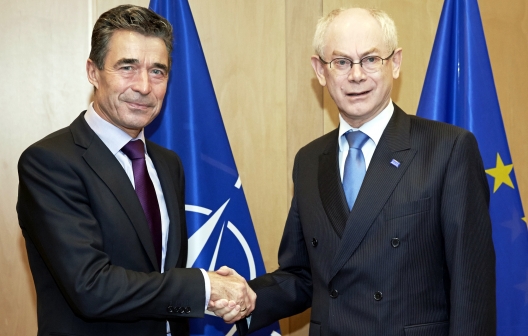 In 2013, NATO engaged with more partners in more substantive areas than ever before. . . .

Middle East and North Africa
• In October, following preparatory discussions among experts in Tripoli and Brussels, NATO Defense Ministers agreed to respond positively to a request for assistance from Libya. Specifically, Libya asked NATO to assist the country in strengthening its security and defense sector. . . .

• In September, NATO and Djibouti agreed to develop closer cooperation that includes the establishment of a liaison office in support of NATO’s counter-piracy operation, Ocean Shield.

• Despite civil unrest in Egypt, NATO continued its training program in landmine detection.

• April 2013 also marked the first visit of a NATO Secretary General to the Republic of Korea, a valuable contributor to the ISAF mission which is also interested in expanding cooperation with the Alliance.

• NATO’s partners in the Asia-Pacific region, which also include Australia, New Zealand, and Mongolia, have been valuable troop contributors to the International Security Assistance Force (ISAF) in Afghanistan. Building on these experiences in the field, NATO coordinates with these partners to retain the ability to work together in operations while expanding cooperation in other areas, including counter-terrorism and cyber defense.

• These initiatives complement expanding NATO ties to other countries of the Asia-Pacific region, including Malaysia and Singapore.

• Senior staff from NATO and China continued their informal security dialogue in 2013.

Countries aspiring to join NATO
• Particularly close relationships are maintained with the four partner countries that aspire to NATO membership – Bosnia and Herzegovina, Montenegro, the former Yugoslav Republic of Macedonia1, and Georgia. In 2013, good progress was made in implementing the reforms necessary to meet the Alliance’s standards, even if further progress is required for these countries to achieve their membership aspirations. Specific areas of work include:

• bringing security agencies up to NATO standards and addressing corruption in Montenegro;

• continuing progress toward civilian and military reform goals as set out in the Annual National Program in Georgia.

• An invitation to the former Yugoslav Republic of Macedonia1 will be extended as soon as a mutually acceptable solution to the issue over the country’s name has been reached with Greece.

• In September, NATO and the United Nations (UN) marked five years of enhanced partnership since the signing of the Joint Declaration on UN/NATO Secretariat Cooperation in 2008. These five years have been characterized by growing practical cooperation and an increasingly effective political dialogue between the two organizations to support regional capacity-building and crisis management, with a strong focus on Afghanistan.

• NATO and the European Union continued their close cooperation in 2013. In December, NATO’s Secretary General addressed the European Council during their meeting on defense. This was the first address by a NATO Secretary General to the European Council. This high-level engagement was matched by cooperation on the ground in Afghanistan, Kosovo, and Bosnia and Herzegovina; structured dialogue continued at the staff level to exchange information and avoid duplication.

• Similar staff-to-staff contacts also continued with the Organization for Security and Co-operation in Europe and with a number of other key organizations, such as the League of Arab States, the Gulf Cooperation Council, and the International Committee of the Red Cross.

• NATO’s planning and capacity-building support to the African Union Mission in Somalia also continued in 2013, including with a small NATO military liaison team at the African Union Headquarters in Addis Ababa, Ethiopia.

• In 2013, the Alliance updated its Political-Military Framework which ensures that partners can participate more effectively in Allied assessments, planning, and decision-making on current and potential operations.

• This and other measures build on the experiences of partner country involvement in NATO-led operations in Afghanistan, Kosovo, Libya and the counter-piracy operation, Ocean Shield. Through these experiences, NATO and its operational partners improved their political consultations and gained higher levels of interoperability. To secure these gains, NATO’s partners will be more systematically integrated into NATO’s regular training and exercise programs.

• As part of these efforts, NATO is fostering partner participation in the NATO Response Force (NRF), NATO’s rapid-reaction force. In 2013, Sweden joined the NRF alongside Finland and Ukraine, while Georgia pledged to make forces available to the NRF in 2015. In the autumn, four partners participated in the Alliance’s largest exercise of the last seven years, Steadfast Jazz, which served to certify the NRF rotation for 2014.