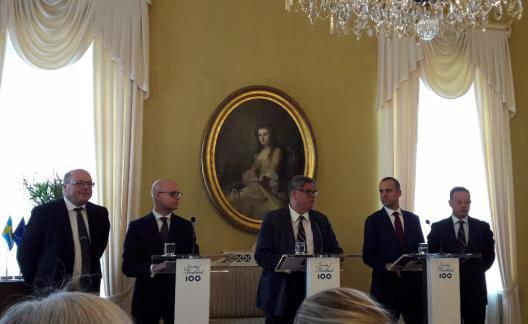 From Jussi Rosendahl and Tuomas Forsell, Reuters:  Several European Union and NATO member nations on Tuesday signed up to establish a center in Helsinki to research how to tackle tactics such as cyberattacks, propaganda and disinformation….

The center will be based in Helsinki and will form a network of experts for the participating countries. A steering group is due to hold its first meeting Wednesday. It is expected to have a team of 10 people working there by later this year.

“The center is a real boost for the cooperation between the EU and NATO. … Hybrid activities have become a permanent part of the European security environment,” Finnish Foreign Minister Timo Soini told a news conference….

The annual budget of the center is initially about €1.5 million (U.S. $1.6 million), with Finland providing half the funding and the rest covered by members.

High Representative of the Union for Foreign Affairs and Security Policy and Vice President of the Commission Federica Mogherini said on the occasion: “As European Union, we will grant our full support to Finland in driving the new Center of Excellence for countering hybrid threats forward to a full operation capacity and in its future work in delivering expert strategic analysis on countering hybrid threats, which will contribute to security in Europe. The establishment of the Center in Helsinki will further strengthen EU-NATO cooperation, particularly on one of the greatest challenges in today’s world. ”

While the European Union will not be a signatory to the memorandum of understanding between the various participating Members States and Allies, it has been invited to support the steering board with expertise. As the Center develops, we look forward to being able develop a close working relationship drawing in particular on the experience gained through the European Union Hybrid Fusion Center that operates at technical level in Brussels.

Several NATO Allies and European Union members came together in Helsinki on Tuesday (11 April 2017), formally agreeing to establish a European Center of Excellence for Countering Hybrid Threats in the Finnish capital. At a ceremony attended by Finnish Foreign Minister Timo Soini, officials from NATO and the European Union welcomed the signing of a Memorandum of Understanding for the Center, which will open later in 2017….

In total, nine nations signed the Memorandum: Finland, France, Germany, Latvia, Lithuania, Poland, Sweden, the United Kingdom and the United States. Other NATO and EU nations are expected to join the Center in the near future. While not signatories themselves, NATO and the EU will participate actively in the Center’s activities.

Countering hybrid threats is a priority for NATO, as they blur the line between war and peace – combining military aggression with political, diplomatic, economic, cyber and disinformation measures. NATO’s counter-hybrid strategy includes strengthened coordination with the European Union, and also involves our new Intelligence Division, more training and exercises, and our work to actively counter propaganda with facts.