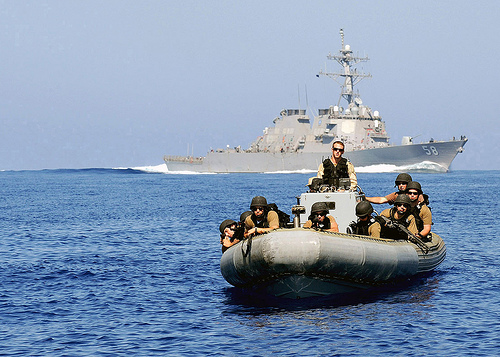 From NATO:  Excerpts from briefing by NATO Spokesperson Oana Lungescu, Brigadier General Pierre St-Amand of the Canadian Air Force and Director of the Strategic Plans in the Capability Plans and Policy Branch at Allied Command Operations , and General Massimo Panizzi, spokesperson of the Chairman of the Military Committee.

Brigadier General Pierre St-Amand: As for the chain of command for this operation, political direction has been provided by the North Atlantic Council to the SACEUR. The chain of command will be from SACEUR [Adm. James Stavridis] to the Commander of Joint Forces Command Naples [Adm. Samuel J. Locklear] and then to the Commander of Maritime Command Naples, Vice Admiral Rinaldo Veri of the Italian navy. …

So how do you conduct an arms embargo? Currently, as an interim solution, the operation will be carried out using ships from NATO Standing Naval Maritime Group 1 and a NATO Standing Naval Mine Countermeasures Group 1. These ships will be augmented and replaced by expected contributions from NATO allies and potentially partner nations over the next several days.

A typical engagement within the area of responsibility would be for a NATO ship to intercept the vessel of interest, with a view to confirm compliance with the arms embargo. The first action would consist of initiating communications with the vessel, or hailing in naval terms, to a certain compliance and coordinate boarding. At this point we have sufficient rules of engagement to allow up to an including a post boarding, if necessary, but the end result of the interception would have a NATO boarding team on the vessel conducting an inspection of the personnel and cargo.

If after inspection doubts remain as to the legitimacy of the cargo, the vessel will be diverted to a designated port for further inspection.

Oana Lungescu:  Operation Unified Protector is still in a transition phase, but I understand that several nations have come forward with pledges …