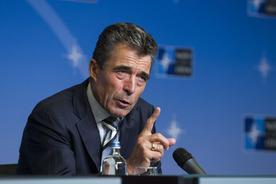 Tonight in Kyiv, many Ukrainians continue to show their strong support for their country’s closer relations with the European Union. It is the right of people everywhere to express their views in a democratic way.

I appeal to all parties to refrain from violence and the use of force at all cost. Violence and force are not the way to resolve political differences in a democratic society. I urge everyone to proceed in accordance with constitutional and democratic norms. NATO fully respects all Ukrainians and the democratic ideals of the Ukrainian nation.

I call on Ukraine, as the holder of the Chairmanship in Office of the OSCE, to fully abide by its international commitments to respect the freedom of expression and assembly.

Statement by the NATO Secretary General on events in Ukraine.