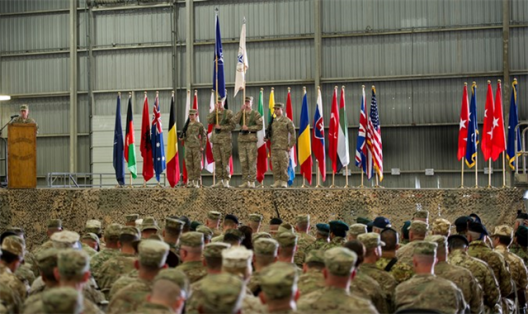 After eight years of running Kandahar Airfield in Afghanistan, NATO has formally handed over control to the United States at an end of mission ceremony.

Once the busiest single runway military airfield in the world, at its peak Kandahar Airfield was home to 26,000 military personnel from 60 nations and saw 5,000 flights per week. During this time, NATO has also made possible the re-opening of the civilian airport and enabled the Afghan Air Force to start operations in the region.

With coalition combat operations due to cease by the end of this year, Kandahar Airfield will take on a new role as a base for Train Advise Assist Command – South (TAAC-S) and the US 451 Air Expeditionary Group. TAAC-S and the AEG will be part of the new NATO mission to train, advise and assist the Afghan National Security Forces and adjacent Kandahar International Airport, with the US being the lead framework nation in Kandahar.

Initially under United Kingdom Royal Air Force command, the ninth and final NATO commander of Kandahar Airfield has been Brigadier General Michael Fantini of the US Air Force. He said, “NATO is flexible, it has a vision, it has a command element and it’s going to take the next mission into resolute support in accordance with the plan.

“Talking about the lessons learned during his period of command, General Fantini said, “NATO works and there are certainly challenges, but when we work through these challenges we actually become stronger from the different perspectives that each nation brings to the table. That’s the great conversation that needs to continue to occur and we need to continue to move forward with this coalition concept of how we provide security for those that don’t have that opportunity.”

Group Captain Ian Reynolds is a Royal Air Force logistics officer and has been the final Deputy Commander for Support at Kandahar Airfield. In talking about the future for Kandahar Airfield he said, “The civilian airport is a major part of the future of this part of Afghanistan. The airport management have great vision for what it can bring. If you are going to develop business in southern Afghanistan, if you are going to have people coming to this part of the world, then the airport is absolutely critical. It is a jewel in the crown in the region because it is very well run.”