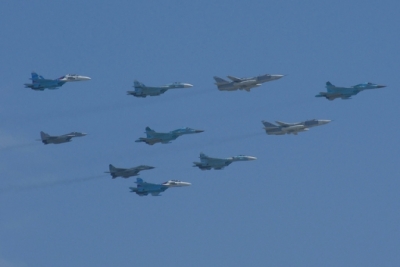 Four Russian Aircraft Intercepted over Black Sea on 29 October 2014
During the afternoon of 29 October, NATO radars detected and tracked four Russian aircraft flying over the Black Sea in international air space, including 2 Tu-95 Bear-H bombers and 2 Su-27 Flanker fighter jets. Fighters from the Turkish Air Force have intercepted the Russian aircraft and NATO is continuing to track them in international airspace. As of 4 p.m. CET the aircraft were still airborne.

NATO jets were on standby throughout the duration of both Russian flights and Russian aircraft were continually tracked using Allied assets on the ground and in the air. NATO has conducted over 100 intercepts of Russian aircraft in 2014 to date, which is about three times more than were conducted in 2013.