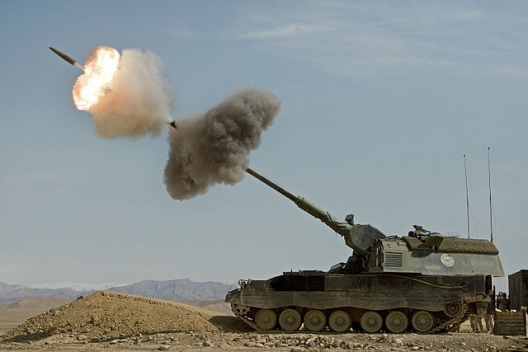 Here are some of the alliance’s most lethal combat systems, each operated by two or more member states.

If there was ever a common NATO fighter aircraft, the F-16 is it. Belgium, Denmark, Greece, the Netherlands, Norway, Poland, Portugal, Turkey and the United States all fly one variant of the F-16 or another. In the three decades since deliveries began each country upgraded their fighters at their own pace, leaving the NATO fleet widely varied in capability.

Originally conceived as a lightweight dogfighter with strong export potential, the F-16 has gradually evolved into a genuine multi-role fighter. Over its long career in NATO service, a Dutch F-16 shot down a MiG-29 in the Balkans, and Dutch, Belgian, Danish and Norwegian F-16s have bombed targets in the Balkans, Afghanistan and Libya….

A self-propelled howitzer produced by Krauss Maffei Wegmann of Germany, the PzH2000, as it is known is one of the most modern artillery systems fielded by NATO. It replaced the American-made M109 in German service, and is currently fielded by Germany, Greece, Italy and the Netherlands….

A rate of about ten rounds a minute is however sustainable, and effectively offers triples the firepower of the old M109….

The most advanced diesel electric submarine in NATO, the Type 212 is an extremely quiet diesel electric submarine engineered to patrol the Baltic and Mediterranean seas. An Air Independent Propulsion System (AIP) allows the Type 212 to stay submerged for up to three weeks….The 212 in German service is armed with the DM2A4 “Sea Hake” heavyweight torpedo, while those in Italian service are armed with the “Black Shark” torpedo….

Colt Canada—a division of Colt’s Manufacturing Company—builds small arms based on the M-16 pattern for Canada. Unlike its parent, Colt Canada has managed to build a following among NATO countries. Canada, the United Kingdom, the Netherlands and Denmark all equip their armed forces with Colt Canada rifles….

The FN MAG was developed by Fabrique Nationale of Belgium in the early 1950s, just as armies around the world were waking up to the general purpose machine gun concept. The MAG was adopted by almost all of the NATO countries, including Belgium, Canada, Denmark, France, Greece, Luxembourg, the Netherlands, Norway, Turkey, the United Kingdom and even the United States. Rate of issue is at the platoon and squad levels.

Kyle Mizokami is a defense and national security writer based in San Francisco who has appeared in The Diplomat, Foreign Policy, War is Boring and The Daily Beast.

Image: Dutch Panzerhaubitz in Afghanistan, Feb. 28. 2009 (photo: Ministry of Defense of the Netherlands)