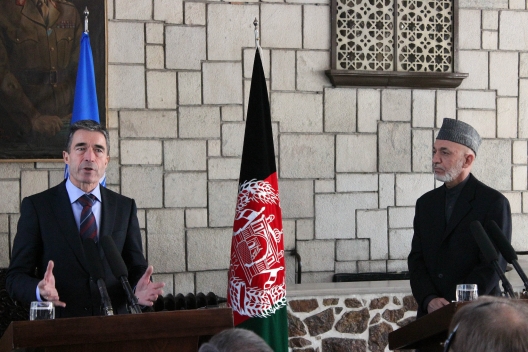 NATO would have to pull all its troops out of Afghanistan by the end of 2014 if Afghan President Hamid Karzai does not sign a security pact with the United States, alliance chief Anders Fogh Rasmussen said on Monday.

An assembly of Afghan elders, the Loya Jirga, last month endorsed the security pact intended to shape the U.S. military presence in the country beyond 2014. But Karzai said he might not sign it until after elections in April. . . .

The United States has already warned it could withdraw all its forces by the end of next year, the so-called “zero option”, if Karzai does not sign the pact.

Without the U.S.-Afghan accord, NATO will not be able to finalize its own agreement with the Afghan government setting the terms for troops from other NATO and partner nations to remain in Afghanistan after 2014, Rasmussen told reporters.

“In that case, we don’t have a proper legal framework in place and it will not be possible to deploy a ‘train, advise, assist’ mission to Afghanistan after 2014,” Rasmussen said. . . .

NATO foreign ministers meet in Brussels on Tuesday and Wednesday to discuss Afghanistan. The delay in signing the U.S.-Afghan security pact is causing mounting frustration among NATO diplomats because it is holding up detailed military planning for the post-2014 mission.

NATO officials and diplomats warned privately of dire consequences for Afghanistan, including threats to up to $8 billion a year in aid, if Karzai failed to sign the U.S. pact.