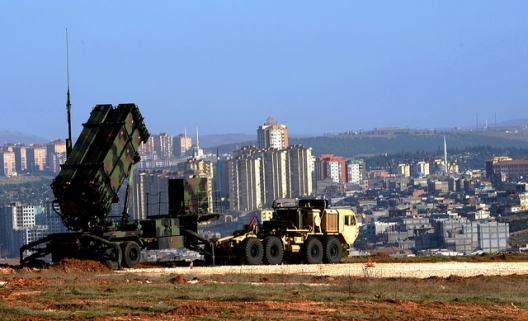 A NATO official has said a Syrian rocket that landed close to a Turkish military unit and slightly wounded five people on Wednesday was outside the areas covered by the current Patriot configuration in Turkey. …

The Turkish military said on Wednesday it fired shells at Syrian artillery positions near the border in retaliation for a Syrian rocket that landed only 200 meters away from a Turkish military unit in the Turkish border town of Reyhanlı.

“The [Syrian] missile impacted outside the areas covered by the current Patriot configuration,” said a NATO official in Brussels in an email response to Today’s Zaman….

The official also stated that the Patriot batteries are deployed “in a way to provide the greatest possible coverage and the maximum protection of the Turkish people against missile attacks.” The official added that “millions of people are better protected on NATO’s southeastern border as a result.”

The exploding rocket formed a large crater, caused the roof of a military building to collapse and damaged two vehicles. Five people were injured by broken glass, the military said.

It said the Turkish artillery retaliated by firing at the Syrian regime position.