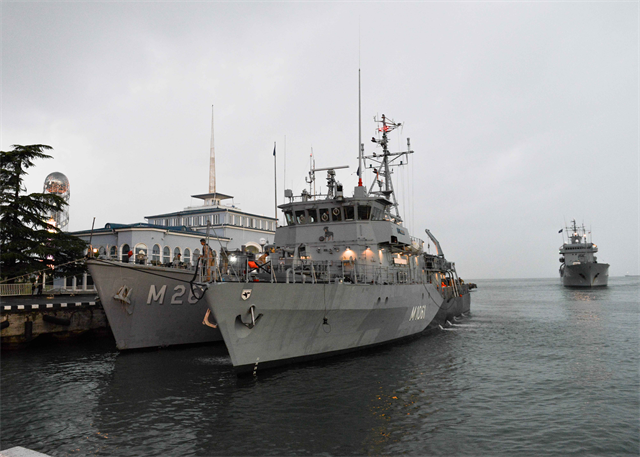 Under the command of Commander Matthias Seipel, German Navy, the Group includes the flagship FGS MOSEL and FGS ROTTWEIL of the German Navy and TCG ERDEMLI of the Turkish Navy.

“It’s a privilege for SNMCMG2 to be visiting this port” said Seipel. “It is an opportunity for NATO to acknowledge and highlight what continues to be a very positive partnership between the Alliance and Georgia.”

During the visit, the NATO forces will train together with Georgian Coast Guards, conducting personnel exchange and joint exercises.

In conjunction with the port visit by SNMCMG2, NATO Allied Maritime Command (MARCOM) Deputy Chief of Staff ‘Operations’, Commodore Arian Minderhoud, Royal Netherlands Navy, made a courtesy visit to the port, and met with Georgian officials, including the Head of the Adjaran Government and directors of the Georgian Border Police and Coast Guard.

“This partnership has proved to be highly beneficial for both NATO and Georgia” said Minderhoud. “Georgia’s participation in NATO operations greatly contributes to international security and our military cooperation creates bridges to ensure we can communicate and work together effectively”.