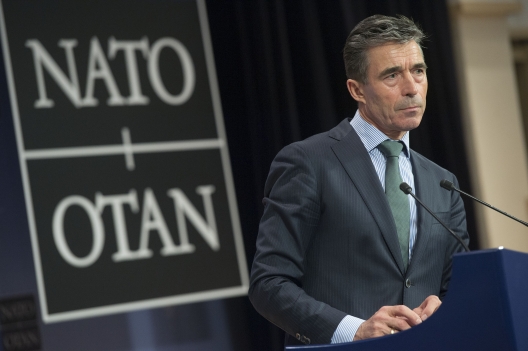 Russia’s aggression against Ukraine is the gravest threat to European security in a generation. And it challenges our vision of a Europe whole, free and at peace; a vision that we have built since the end of the Cold War. But we remain as committed as ever to this vision.

NATO’s greatest responsibility is to protect and defend our territory and our people. And make no mistake, this is what we will do.

Today, we reaffirm our commitment to collective defence. We will deter and defend against any threat. We remain vigilant, ready and able to defend our Allies.

We have already reinforced NATO’s presence on the eastern borders of the Alliance.

We are flying AWACS surveillance patrols over Poland and Romania.

We have more than doubled the number of fighter aircraft allocated to the NATO air policing mission in the Baltic States, thanks to the United States. And many European Allies have also offered additional planes and air-to-air refuelling tankers and other capabilities. I welcome this demonstration of strong solidarity.

Today, we directed our military commanders to develop additional measures to enhance our collective defence and deterrence against any threat of aggression to the Alliance. We will make sure we have updated military plans, enhanced exercises and appropriate deployments.

Today we also agreed on further support to Ukraine.

We will intensify our efforts to support Ukraine’s defence reforms, to make the Ukrainian forces more professional and more effective.

And we will provide advice on Ukraine’s protection of critical infrastructure.

We have also agreed to suspend all of NATO’s practical cooperation with Russia.

Through its actions, Russia has chosen to undermine the very foundations upon which our cooperation is built. The military action against Ukraine and the illegal annexation of part of Ukraine’s sovereign territory constitute a flagrant breach of Russia’s international commitments.

In light of this, there can be no business as usual. So today, we are suspending all practical cooperation with Russia, military and civilian. In the NATO-Russia Council, the Euro-Atlantic Partnership Council, and the Partnership for Peace. At the same time we keep our diplomatic lines of communication open, and we are ready for ambassadorial or ministerial meetings in the NATO-Russia Council.

We will continue to review our relationship in view of Russia’s actions.

NATO’s message is clear. We stand by our Allies. We stand by Ukraine. And we stand by the international system of rules that we have made so much effort to build together over the last decades. And we urge Russia to engage in dialogue towards a political and diplomatic solution that respects international law and Ukraine’s internationally recognized borders.

In light of this new reality, preparations for our Summit in Wales are even more important. Let me stress, we remain committed to all our core missions. We will further develop our partnerships through defence capacity building and by building upon our experience in operations in order to further promote security and stability together. And we will continue to invest in our readiness, so that we stay strong and prepared for any challenge.